Vanillaware is often known for ample cheekage (and ample other things) in their character design, but I don’t think they’ve ever gone this far before. Lucky Japanese gamers are being treated to the Genroku Legends DLC pack for Muramasa Rebirth, the first part of which was released earlier this week. It is titled “The Fishy Tales of the Nekomata” and features an adorable creature named Shirime. In Japanese, “Shiri” means butt and “Me” means eye. So perhaps this is a creature that really likes looking at butts? An ogler of butts? I feel like they could’ve pulled any one of the enemies from Punishment Punch Girl and they would’ve qualified as a Shirime. Lets just take a look at a screenshot to see which one they went with. 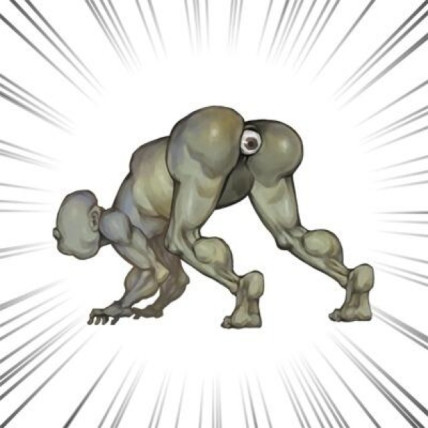 KILL IT KILL IT WITH FIRE NOW.

I have so many questions. Most importantly, what happens if it farts? Strangely, this creature is not a Vanillaware creature at all, as the Shirime is a traditional Japanese monster with a long history in their storytelling. According to the common story, long ago a samurai was walking along a road in the dark of night when he heard someone calling out to him. When he turned around, shaking nervously, he found a man taking off all his clothes and spreading his butt cheeks. Instead of an anus, the man can face to butt with a large blinking eye.

…that’s it. That is the entire story. I don’t know what else I’m missing, but I feel like between a man in armor with a sword and a nude man with a butt eye, its the guy who has no means of defense and a hard time seeing with his pants on that should be frightened in that scenario. Regardless of where you think the scariest place for an eyeball might be (UNDER THE ARMPITS AHHHH!) you can kill the Shirime if you happen to have the Japanese version of Muramasa Rebirth now. Just don’t do anything to make it cry.