The PS Vita has become a mobile home for fighting games. Developers have continually been bringing their fighters to Sony’s latest handheld since the thing launched, with Ultimate Marvel vs. Capcom 3, PlayStation All-Stars Battle Royale, Mortal Kombat and Dead or Alive 5 all finding a home on the console.  Injustice: Gods Among Us Ultimate Edition is the latest to take up residency.  Has Armature Studio (Batman Arkham Origins — Blackgate) brought justice to this great game?

Injustice: Gods Among Us Ultimate Edition’s story mode is a direct port from the PS3, Xbox 360 and Wii U’s version for better or for worse.  Superman is tricked by The Joker into killing his wife, Lois Lane, and unborn child by setting of a nuclear bomb in Metropolis. In his rage, he murders The Joker in front of Batman and sets into motion the events that would bring him to power and make Batman his nemesis.  Five years later, Batman is able to pull members of the Justice League from an alternate universe where the bomb didn’t go off to help him put an end to Superman’s regime.

NetherRealm found a way to incorporate an actual story into a fighting game back in 2011 with Mortal Kombat.  Using this knowledge they attempted to craft an even better story with Injustice.  The result was a good attempt, but the fact that the entire backstory was cut out to create a comic series left too many questions unanswered.  The campaign’s 12 very short didn’t help either.

Even with its brevity, however, It’s still an enjoyable story to play through.  You’ll take on the roles of eleven different characters (one character gets two chapters) as they attempt to overthrow Superman.  NetherRealm has gotten much better at making cinematic cutscenes with Injustice serving up some great action pieces.  Also, having famous voice actors like Kevin Conroy reprise their roles from the DC Animated Universe does wonders for the dialogue.

If you’ve already played Injustice: Gods Among Us on another platform then you’ll be getting the same exact story.  It’s actually rather lazy to call this the “Ultimate Edition” when it doesn’t even include the comic series that actually fills in the backstory.  Armature didn’t have to create brand new story segments for the campaign, but including the comic book series that explains Superman’s rise to power and the fall of the other heroes and villains would have been much appreciated.

Sadly, the feeling of laziness is something that permeates this entire port, though to be fair not all of this is Armarture’s fault.  NetherRealm’s repetitive campaign structure is still here.  Basically, players get their character, enter rooms with one to three enemies, other allies go and postpone one of those enemies, player beats badguy, allies get beaten up and you clean up their mess.  It’s too chaotic and something that could have been resolved if NetherRealm included double or triple battles like in Mortal Kombat.

Chapters themselves are extremely short lasting only four battles each, which can then be beaten in ten minutes each.  What you’re left looking at is a campaign that can be beaten in two to three hours.  Out of the twenty-four stock characters, only eleven are used in the campaign, which feels like a waste on NetherRealm’s part.

Thankfully, everything else is quite good.  The classic Battle mode from Mortal Kombat makes its way into Injustice. Nine random enemies are fought before facing off against Superman in an epic final battle.  Victory awards players with a unique ending for each character.  NetherRealm went crazy by adding all kinds of different Battle Modes.  You can always go for the traditional classic, or you can choose from a long list ranging from villains only, heroes only, poisoned and even fighting the entire cast with only one life bar.  It’s exciting to see so many options, but these are all options we’ve seen before.  There isn’t anything new here.

In fact, there simply isn’t anything new at all.  Yes, it does come with all six DLC characters, sixty S.T.A.R. Lab Missions and forty-seven skins, but this is all stuff we’ve seen before.  Cramming all of the previously-available DLC in here and charging full price is the epitome of laziness.  When games like Dead or Alive 5 or Mortal Kombat were ported to the PS Vita, the developers put in the extra time to craft brand new and exclusive content for the version.  In Injustice, we still don’t have alternate costumes for the DLC characters, two awkward empty spaces on the character selection screen and the fact that Martian Manhunter and Zatanna are the only two characters on the roster who don’t have S.T.A.R. Lab Missions. 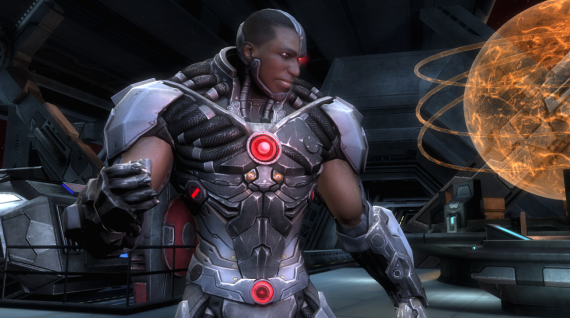 What you can’t really deny is that the game is still a whole lot of fun.  The PS Vita is the perfect device for playing fighting games thanks to its fantastic D-Pad and rigid, responsive buttons.  For the most part, Armature was able to replicate the console controls of the PS3 version perfectly.  Square, Triangle and X are still your primary attack buttons and can be stringed together to perform some sweet combos.  Circle activates the character’s special trait. Combine the right buttons with the D-Pad and you’ll get flashy special moves.

Armature wisely didn’t incorporate the touchscreen or touch pad into the fighting.  The only time you’ll ever use the touchscreen is during campaign mini-games and some S.T.A.R. Lab Missions.  The touch pad is never used at all.  The only downside to the controls is Throw. Throw was mapped to L1 on the PS3, but rather than map it to L on the PS Vita, it is now activated by pressing square and x at the same time.  It’s very odd and obtrusive to use and sadly can’t be remapped.

All twenty-four characters return with the six DLC characters bringing the total of playable characters to thirty.  Every character is unique with their own fighting styles, special abilities, special trait and Super Move.  Scorpion’s moves were airlifted straight out of Mortal Kombat 2011, so those who played that game should be right at home with him.  Like in April, it’s still a good roster, though balancing issues with the likes of Deathstroke and Aquaman remain.

Ultimate Edition does feature a rather robust set of multiplayer options.  Unfortunately, player count is rather lacking so we were only able to play a few matches, but none of them were very smooth.  Latency was high with some button prompts not even registering.  Hopefully this will be fixed sometime in the near future. Armature promised to retain the visual fidelity of the console versions all while pushing the hardware as hard as it can.  This simply isn’t the case.  Injustice: Gods Among Us Ultimate Edition is a terrible looking game on the PS Vita and reeks of being a rushed and lazy port.

Texture and model quality is severely diminished in fights to where all of the rich costume details of the console versions become blurred 2D messes.  Take Superman’s chest crest, for instance.  It was a 3D object on consoles, but is now a 2D object with minimal detail on PS Vita. Transitioning from the campaign’s cutscenes to the in-gaming fighting is also a jarring experience.  It even does this weird thing during Super Moves or stage transitions where the game switches the models and textures for better ones, and then switches them back at the end.  Obviously, the PS Vita can’t give the same graphical fidelity of a console, but other games have proved better than this.

Speaking of cutscenes, whatever Armature used to compress them was a bad idea.  I was looking forward to watching the excellent cutscenes on the Vita’s OLED screen, but something must have gone wrong during compression.  Image quality was bad with visuals being very blurry.  I rechecked all my visual settings to make sure it wasn’t the handheld, but everything was as it should be.  What’s worse is that the cutscenes annoyingly stuttered a good majority of the time.

For as bad as the visuals are, it’s surprisingly that the game performs technically well aside from the multiplayer issues.  The framerate does drop every now and then when action gets heavy on screen, but it holds on well for the most part. PlayStation All-Stars Battle Royale and Dead or Alive 5 proved that it’s possible to have great graphics on the PS Vita when it came to fighting games.  Heck, even Mortal Kombat looked decent for its time.  Sadly, Injustice: Gods Among Us does a poor job showing off what the PS Vita can do. 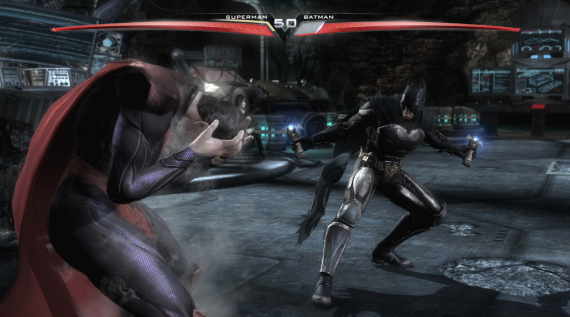 I love playing fighting games on PS Vita and I can’t say I didn’t have fun playing Injustice: Gods Among Us Ultimate Edition on it. Unfortunately, it’s a criminally lazy port.  It’s as fun as ever, but Armarture Studio has done nothing to make this more than a dull rehash.  No new content and terrible visuals make this an unworthy addition to the PS Vita’s library of fighting titles.  If you already have the game on consoles, skip the handheld version and wait for the DLC to go on sale or for Warner Bros. to package it all together.  If not, you’re better served picking up the PS4, PS3 or Xbox 360 versions of Injustice: Gods Among Us Ultimate Edition.