Remember Tower of Guns?  It was looking pretty sharp at E3, earning a Hardcore Gamer Best of E3 nomination, and since then it’s been updated on a semi-monthly basis with new maps, enemies, guns, bosses, powers, and plenty of other goodies.  It was featured in the Not on Steam sale, and then managed to complete the Greenlight process a few weeks later.  Basically, a lot of good things have been happening with this fast paced semi-random Quake-style FPS, and with the latest update nearing the 2/3 mark towards completion it’s time to celebrate with an IndieGameStand pay-what-you-want sale.

As a brief refresher, though-  Tower of Guns is a randomized FPS set in a giant mechanical tower, and you pick a gun plus a perk at the game’s start and try to survive as long as possible while blasting your way though a series of rooms.  While the rooms are hand-built, the order is random and there are many different possible patterns of enemies that might show up.  Each themed section is about 4 rooms long plus a boss fight, and the rooms range from fairly simple to highly ornate with secret nooks and crannies.  Additionally, power-ups are randomized as well, and they stack forever.  Quintuple-jump at hyper speed with a gun that shoots exploding bullets?  Sure, if you find the right bonuses.  There’s a good number of guns, some of which can be earned and others bought if you get lucky enough to find a vending machine, and as you run through the rooms blasting enemies you’ll level up the gun you’re wielding.  Until you die, of course, at which point it’s back to the starting foyer for another run up the tower. 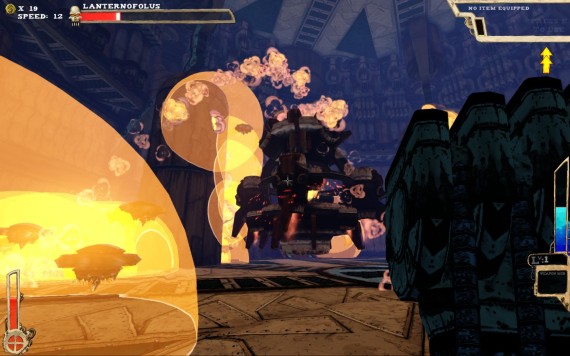 Tower of Guns is a good one, and not only the last time it will be on sale before its Steam release but also the cheapest it’s going to be.  It’s already a great little coffee-break game, designed to be played in small chunks if you can avoid restarting instantly after death, and the remaining 1/3 of the game still in development should only make it better.  If you like the action-oriented Quake-style FPS, more about shooting, dodging and jumping than being led through a narrative, it’s well worth heading on over to IndieGameStand and giving Tower of Guns a once-over.