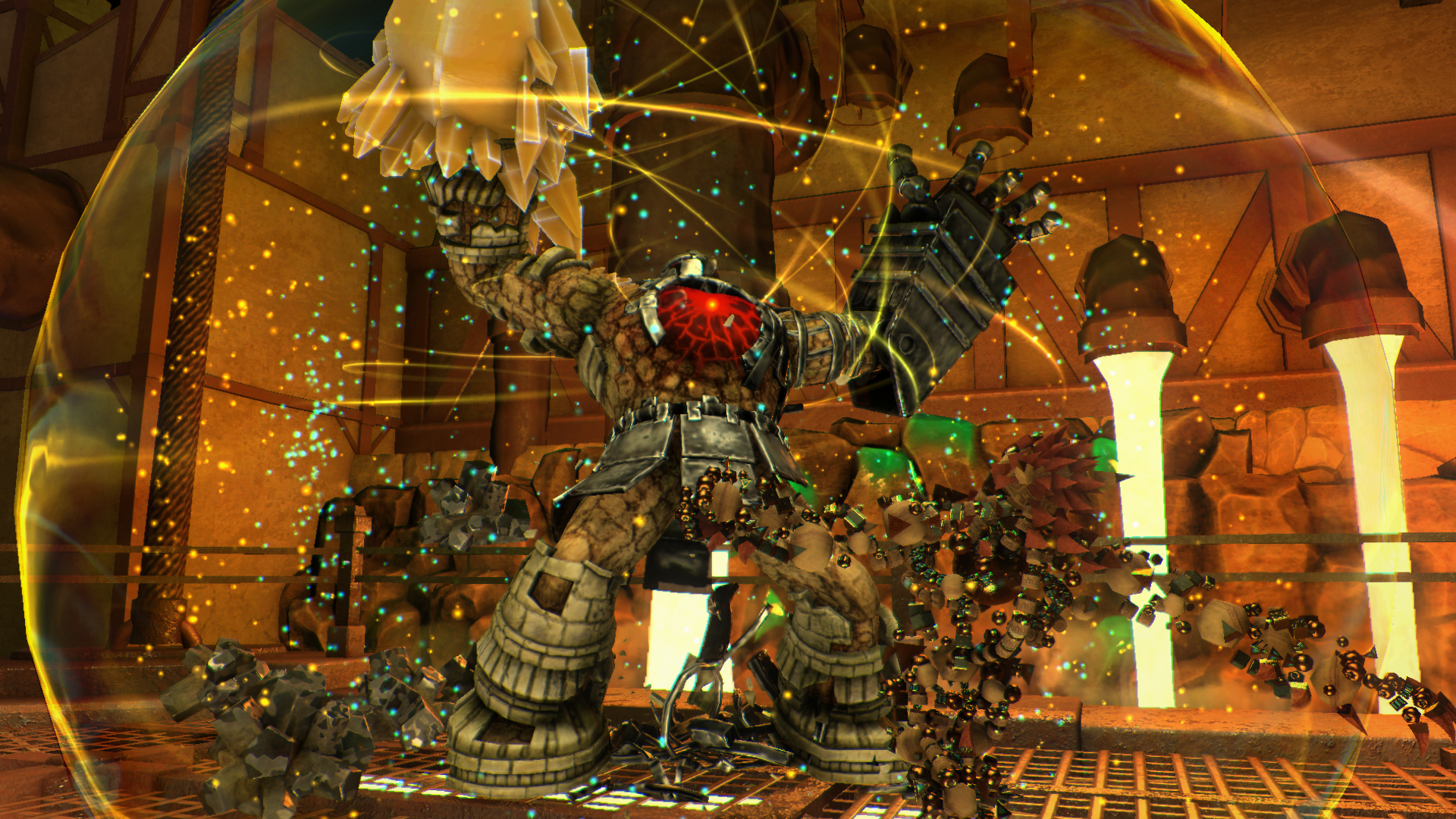 Knack is an interesting beast – both the game and the character. It’s one of the next generation’s flagship titles, and it certainly looks the part with beautiful lighting, character models that straight out of an animated feature and a protagonist comprised of hundreds of individual physics objects, as if to say “because we can.” Yet with its simple gameplay, bright colors and mascot protagonist, it feels like a product of a bygone age – more specifically the late ’90s. If you stripped away the pretty graphics, Knack would feel right at home on the PS1.

Perhaps that’s not so strange, though, given that Knack is the brainchild of Mark Cerny, who is both the lead architect of the PS4 hardware and one of the key figures behind both Crash Bandicoot and Spyro the Dragon. Crash in particular is clearly a huge inspiration for Knack, with its slightly fiddly fixed-perspective 3D platforming and propensity for having big, scary things chase the player toward the camera. Knack certainly brings the fast pace and light fun of that older school of design to the table, but it also brings back a lot of problems that newer schools have long since expelled.

The PS1 influence is strongly felt in the story, a silly mix of sci-fi and fantasy that pits technologically advanced humans against tribal goblins in a war for “relics,” magical macguffins found in ruins that can provide unlimited power. When the Goblins bring out tanks for an assault on a human outpost, the human government throws together a ragtag squad of heroes to investigate the source of the weapons. The team is comprised of movie-hero explorer Rider, obviously villainous industrial capitalist Viktor, and Doctor Vargas, a genius inventor whose latest creation is the game’s titular hero.

Knack is a sentient golem made of relics. When we first see him, he’s tiny, running around the Doctor’s lab beating up appliances. However, in a Katamari-esque wrinkle, Knack is able to absorb relics and make himself bigger. Over the course of most levels he grows from a tiny imp to a towering giant, taking on progressively bigger foes until eventually he can stand toe-to-tread with tanks. The relics serve as both power-ups and Knack’s health meter, with each hit he takes ripping visible dynamic chunks from his body.

Cool though this is, the health meter almost feels superfluous. For an apparently kid-friendly title, Knack has incredibly lethal gameplay. Most regular enemies can finish you in two hits – one if they’re bigger than you or using a special move. Dodging and planning your attacks carefully is of the utmost importance, and the action here is fast so you need to be on your toes. Fortunately the controls are tight and enemy attacks are telegraphed in obvious and expertly animated ways. To get out of the way, Knack is able to both double-jump and instantly shift his body in whatever direction you point the right analog stick.

When it comes to hitting back, Knack has a limited but effective range of tools at his disposal, able to throw a simple three-punch combo on the ground or fire off a Sonic-like homing attack from the air. The punches do more damage, and each one in the combo can be directed with the left stick for crowd control, while the homing attack lets you get in over ground blows and bounce away. Knack also has three special attacks powered by “sunstone energy” that allow him to fire long range homing shots, clear rooms with a mid-range shockwave, or turn his body into an invincible tornado of relics that continuously damages everything nearby. You don’t gain enough power to use these attacks very often, though, so they should be thought of more like bombs in a bullet-hell than as regular moves in your arsenal.

Gamers used to the likes of God of War might scoff at Knack’s simple three-button combat, but it’s certainly a boon to the game’s design. Since it’s easy to get a feel for Knack’s attack range, animation timing, jump height, and dodge distance, the pace is lightning-quick right from the getgo, and the designers are able to throw interesting and challenging mixes of enemies at you early on. It also allows you to adjust on the fly as Knack grows. Your skill at the controls is also almost always the sole determining factor in whether you live or die. It may not be as complex as other brawlers, but Knack is (if you’ll pardon the pun) punchy and satisfying.

Variety is added in the form of components that Knack can absorb into his body, like wood (which can catch fire, increasing Knack’s power but causing him to burn away over time) or crystals (which allow him to change size at will and pass through security lasers undetected). These provide an easy, but temporary way to double Knack’s size, and make for some of the most interesting levels the game has to offer. The mechanics do feel a little under-utilized, though, and I feel as though the game could have benefited from having even more variations overall.

As I said before, though, it shares a lot of the flaws of older games too. The difficulty curve isn’t exactly smooth, and the game can be needlessly punishing. Early on, death will only set you back a battle or two, but toward the end checkpoints become fewer and farther between. With the damage output of most enemies being so staggeringly high, it’s not uncommon to have to fight through three or four rooms of tough fights in a row without getting touched once or falling off anything in order to progress.  The checkpoint system also doesn’t save your sunstone energy, so if you die after expending a special attack, you’ll find yourself with fewer options the next time around.

On top of that, the top-down camera sometimes focuses a little too tightly on Knack, especially as he gets bigger, which can result in a lot of one-shot kills from off-screen. It feels more than a little unfair to have a mech swinging punches at you from where you can’t see it, and a lot of satisfaction is lost when you accidentally kill an enemy you weren’t aware of. Additionally, while the damage modelling on Knack is a sight to behold, it can make it difficult to see where his hitbox begins and ends. These incidences are rare enough not to ruin the game, but they do taint it.

On the positive side, the game looks gorgeous. The character models are cartoony and expressive, with a level of detail and smoothness simply not possible on prior hardware. The designs themselves are bright, colorful, and varied, doing a good job to differentiate between the various factions you face, and always making clear the scale of the brawlers. There’s something intensely satisfying about seeing enemy soldiers running around the size of your little toe. It wouldn’t be a stretch to say Knack looks like a Dreamworks movie running in real time (an impression made stronger by the pop dance number that plays over the end credits).

Speaking of music, the game falters a little there, with a largely generic “cinematic” score setting the bigger scenes. With the smaller scenes, though, there’s a lot of creativity and a bit of nostalgia. The jungle tunes in particular remind me a lot of the casually-racist PS1 glory days, with their enthusiasm for bongos and pipes.  The game features some stellar effect work. When you pick up relics or sunstones, it just sounds right. The pieces are sucked into Knack on the screen, and you can hear them clatter into place from the Dualshock 4’s speaker. In a break from the PS1 influence, the voice work is also great, breathing life into a charming (if a little inane) cast of heroes and villains. Knack in particular has a fantastic, deep voice that’s at once soothing and intimidating. You don’t really hear him speak at a small scale, humorously indicating that maybe he doesn’t like his pipsqueak voice so much.

Knack is a new-age throwback to a time when you could get away with telling stupid, fun stories about mascots beating up goblins in a simple, three-button brawler. It’s also a fine showcase for the PS4’s horsepower that doesn’t paint its world primarily in grey and brown. Unfortunately, some of the things thrown back to are better left forgotten and it can be a bit too tough. Gamers with kids might also be interested in co-op mode, which I wasn’t able to try myself, but purportedly makes the game more manageable. Knack’s not perfect, and shouldn’t be your first priority when picking up a PS4, but if you miss the old days, or want to share a bit of them with your kids, it may very well be worth your while.