As consoles evolved over the years, so too did the games that were offered on them. Consoles became more powerful and 2D gave way to 3D, with every game attempting to push the visual envelope ever farther. 2D games did not disappear, however; they just found a new home on handhelds. The Gameboy Advance was perfect for SNES style visuals, and the DS carried on the 2D tradition quite well with many JRPG’s finding their home on Nintendo’s two screen juggernaut.

One such JRPG is Summon Night Twin Age. It may not be the most epic game around, but the lighthearted charm and addictive gameplay make this game well worth playing. The story, character design and dialogue all work together wonderfully to create an experience that is fun and never gets bogged down in melodrama. As the title suggests there are two main heroes of the game, a male (Aldo) and a female (Reiha) with the player selecting whichever one they wish to have the story center around as you get to play as either one most of the time. There are two main races in the game: humans and the Kascuza who are rarely on good terms with each other. The theme of togetherness and understanding is woven deeply into the game, but it never feels so heavy-handed as to detract from the experience. Aldo is a “summon beast,” which is something that must be hidden as summon beasts seem to be generally looked down upon within the game. As the game begins there appears to be problems with the spirits as they are turning dark and manifesting as aggressive monsters.  It becomes Aldo and Reiha’s responsibility to find out what the problem is, and that means needing to leave their small island home and travel to meet a human friendly to Reiha Mardin. 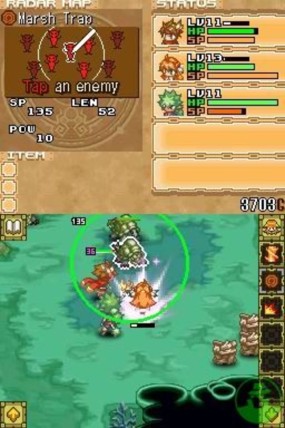 It’s not the most creative of stories but it is handled very well, and is engaging enough to keep you hooked into the game. There are also other allies that you pick up along the way, and interesting dialogue and situations in which to affect your relationship with them. You do this by having a certain character in your party during the missions, which builds up their relationship meter with you opening up new cutscenes and possibilities for romance. This mechanic is fun and not subtle as there is an actual meter showing your relationship level with a certain character, allowing you to easily visually track how a character feels towards your chosen main character.

The main draw, however, is the battle mechanics which make good use of the touch screen. The controls for the game are completely based on the touch screen for the DS, and they work well with movement based on tapping a certain place or holding your stylus in a certain direction. Certain spells require drawing slashes or drawing a line on the screen which how you place your attack or spell. It actually works very well and it is very satisfying to fell swarms of enemies with your well placed slash marks.  There is also a good amount of customization for your characters with many different spells and skills to learn, and then even beyond that you have to assign them to your command palette which is two bars on the side of the screen that you will see while in a dungeon area where you can assign items, weapons, and skills at any time though you can only learn new skills outside of a dungeon. 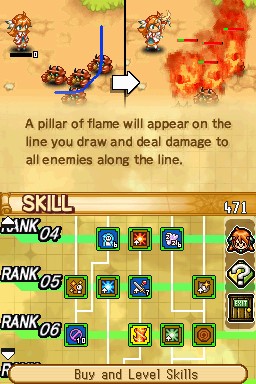 There is no overworld so you are either in a dungeon, a cutscene or on a map screen which allows you to select your next dungeon or shop. There are a lot of ancillary dungeons which allow you to collect items for crafting new weapons at the shop. This is actually very useful in your playthrough as you can get very strong items created for you for a lot cheaper than an equivalent item that you could just buy straight up. There is also a lot of post game content for players to chew on after beating the game. Not only is there a newgame plus style mechanic, but also new dungeons continue to pop up after beating the final boss, which helps you to level up further which is also important to do because higher levels allows you to level up your skills and spells as well.

The story may not be the most outstanding, but every other aspect of Summon Night Twin Age is fun and engaging. Playing through the game with different support characters lets you see whole new dialogue options and keeps it fresh, while the battle mechanics make it fun and unique. You’ll be hooked after the main game has been completed and multiple playthroughs are just as fun and satisfying as the first.