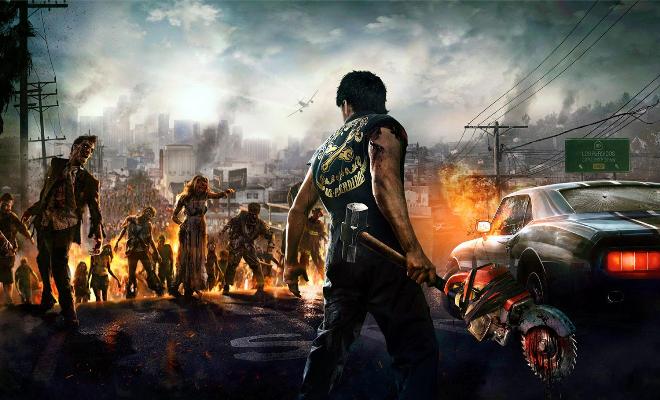 Welcome to Los Perdidos — city of zombies. What was once a Los Angeles style landscape has become ground zero for a zombie outbreak. There are survivors scattered throughout the city and you’re one of them. Nick Ramos is just a mechanic, but it is his trade that will help him make it out of this gigantic mess alive. Hopefully, he’ll be able to leave with at least a few people by his side.

Dead Rising 3 is one of the first exclusives for the Xbox One. Following after the events of Dead Rising and Dead Rising 2, you pick up in a new city with a new cast who are still trying to ward off the undead. While many features remain the same, improvements have also been made to the third installment. Items can be crafted to multiple degrees, players can save anywhere, and time restrictions now barely feel like a problem at all.

In regards to the story, there’s not too much here to draw players in. As with most zombie-based media, the main allure is seeing how normal people manage to fight against the ever-increasing hordes. Nick is the handiest of all Dead Rising protagonists thanks to his mechanical abilities. Not only can he combine two weapons, he can then further combine others to make incredibly devastating new objects. To do so requires finding the proper blueprints scattered around the city. Thankfully, there are many available without having to scavenge specifically for them. As there’s no need for a crafting bench this time around, players can craft in any location provided they have the required implements.

Combining weapons is rarely required but it proves incredibly useful to do so. After all, the stronger your arsenal becomes, the easier you’ll be able to mow through crowds of zombies. The most creative (and humorous) weapons require more items to craft, but the devastation they cause is worth it. Various collectibles are scattered around the map just like blueprints, but usually in clever ways. You might need to climb into a hidden area to find one or even jump from one roof to another to grab them. This all sounds simple in writing but proves to be much more difficult with zombies constantly pummeling you. As such, collecting all items is a surefire method to madness for many players.

Dead Rising 3 ups the zombie count to incredible new heights. There was a time when the sparse clusters of zombies in the original game looked amazing, but that was years ago. Now there are easily hundreds of undead beings roaming around as you wander and scavenge. It almost feels as if there is never a time to relax, because now clusters seem to range from medium to massive. Walking through them is practically a death sentence if you’re not properly equipped. Even driving through the dense crowds is tough because the car will slow with so many bodies in the way. That is, until you combine and create new, destructive cars.

Crafting is extended to vehicles which makes for supremely entertaining experiences. When you have cars with giant retractable blades on the side it quickly becomes passe to simply lob giant teddy bears at zombies. These new vehicles offer greater durability as well as fun methods of weaponization. Until leveling up a handful of times, it also proves to be the safest way to get through Los Perdido’s four districts.

Each time Nick levels up, players get a handful of points to assign to him. They can apply to health, melee or ranged weapons, and even unlock some car blueprints. The further you progress in any skill, the more points are required to reach the next level. The final skills for each ability are locked until players reach level 50. Even after reaching the cap it is still possible to generate more experience. Basically, every skill can be maxed with a lot of determination (or by exploiting experience gains). With a well-leveled Nick and powerful weapons even bosses are a piece of cake.

There are both required bosses and optional ones – called psychos – to fight in Dead Rising 3. Of the two, psychos provide the more unusual experience. Each is based off one of the seven deadly sins and is completely off the wall. Some are humorous, while others seem crass and insulting. In any case, they aren’t able to completely recapture the excellence of the original psychos. Necessary boss battles are usually less wacky, although they sometimes veer into psycho territory. Unfortunately, most of them also require minimal strategy to win. Wild melee attacks paired with timely dodging prove the most effective “strategy” in many circumstances.

Side missions also fall into very similar patterns. Sometimes, all you have to do is clear zombies away from a scared character. Other times, you’re required to do a fetch quest for them. Fetch quests are never particularly fun in games and only less so now that there are zombies reaching for you left and right. Completing these missions grants more experience than just killing zombies which makes them a necessary evil at times. Of course, a handful of missions are actually interesting, but they are the exception to the rule. The lack of variety in missions shows a lack of consideration for evolving games into a new generation.

Visually, Dead Rising 3 certainly looks the part of an Xbox One game, but only because of how many zombies it manages to cram on screen at a time. Characters themselves don’t look much better than games we’ve already been playing. As for the world itself, there’s no heart in it. When compared to the likes of Grand Theft Auto V, which also took place in a fictional Los Angeles, it begins to feel downright antiquated. Still, none of this takes away from how impressive it is to see tremendous amounts of zombies all around Nick and that they rarely cause any slowdown.

At any time, players can choose to get into online co-op. Although it’s called co-op, Nick and Dick can choose to beat up on each other instead. Because of the propensity for some players to “troll” others, it is recommended to play online with friends exclusively. If a friend finds a collectible in your game, it will still be marked as collected once they leave. Another way to play is by running through Nightmare mode; those who feel that Dead Rising 3 made things too simple will find that this mode is closer to the original. Levels are retained once you beat the game as well, meaning players are free to take their maxed Nick into Nightmare mode to even the odds.

Perhaps the biggest issue with Dead Rising 3 is that there’s not much to it. Those who want to simply roam and cause wanton destruction will find their needs tremendously appeased, but anyone hoping to see a game truly trying something new will want to look elsewhere. Dead Rising 3 improves the established formula of the series in many ways, but doesn’t manage to capture the attention of anyone who wasn’t already a fan. Simple fun will only get you so far and players who are looking for a truly “next generation” experience right now will find that Dead Rising 3 simply doesn’t deliver.