Japan, I think we can all agree, can be a pretty strange place. I know what your minds jump to with that statement, but it doesn’t even have to be a sex thing.  This is a country whose chief cultural exports include a glowing monkey man who beats up space Hannibal Lecter to save slug people, an Italian plumber who jumps on turtle dragons and turns into a cat, and dog fighting for children. Even then, though, that’s only what we see on this side of the water. For various legal and cultural reasons, one of the most influential works in Japanese media has never gotten much exposure in North America. This is a work that transcends plebian weirdness. It is out and out… well, Bizarre. 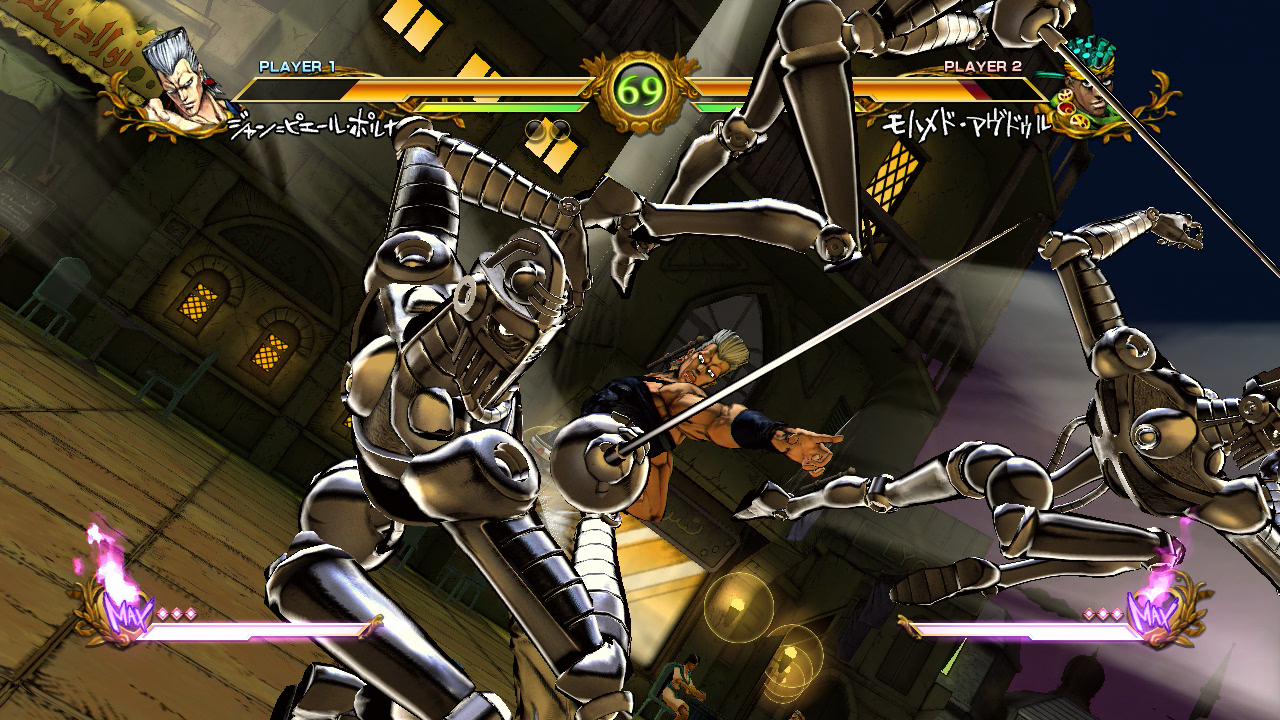 Some of you may be familiar with Jojo’s Bizarre Adventure, and if you are, it’s likely on account of the PS1 fighting game. The game’s known for being very good and pretty rare, and for spawning a popular internet meme where a man stops time and throws hundreds of knives at another man before dropping a road roller on his face. That game is based on one part of a long-running manga, and right now Namco Bandai is working to bring us a new game based on the whole damn thing. Even if you’ve heard of Jojo, you’re probably not as hyped as you should be (read: all the hype) for Jojo’s Bizarre Adventure All Star Battle. Today, I’m gonna try to fix that.

The first part (of 8) of Jojo’s Bizarre Adventure is about a muscle-and-honour-bound gentleman, Jonathan Joestar, who uses magic sunlight breath ripples to explode-punch the zombie minions of his evil adopted brother, Dio Brando, who is a vampire. Jack the Ripper explodes out of a horse’s neck, a man in an extravagant coat and tophat shatters a rock without killing the frog on it, and an urchin steals luggage with the aid of a catapult. It must be noted that all of this capital “C” Crazy amounts to the least crazy stuff in the series by a wide, wide margin.

In the third part of the story, we’re introduced to stands – psychic projections of a person’s fighting spirit, each with unique powers. The stands are initially named for cards in the Thoth Tarot deck, as if the Persona connection wasn’t clear enough already. Actually, Parts 3 and 4 of Jojo are very clearly inspirations for the Persona series. Part 4 in particular involves a bunch of psychic delinquents solving a murder mystery in their small town, and at one point a guy even ends up dead and strung up in a telephone wire. Players familiar with Persona 4 Arena should acclimate quickly to the stand mechanics in All-Star Battle.

The power creep in the Jojo series is positively absurd. In part 1, nobody can touch Dio because he can instantly freeze anything in contact with his skin. In part 3, Dio returns with the ability to stop time. By part 6, our heroes are squaring off against a villain whose power is that he can just straight up end the universe. This is unequivocally fantastic, because it sets up an over the top fighting game to end all over the top fighting games. This is a game where an Italian mobster who can open zippers on anything can face off against a twelve foot tall Aztec superman who makes dubstep whirlwinds with his lungs. 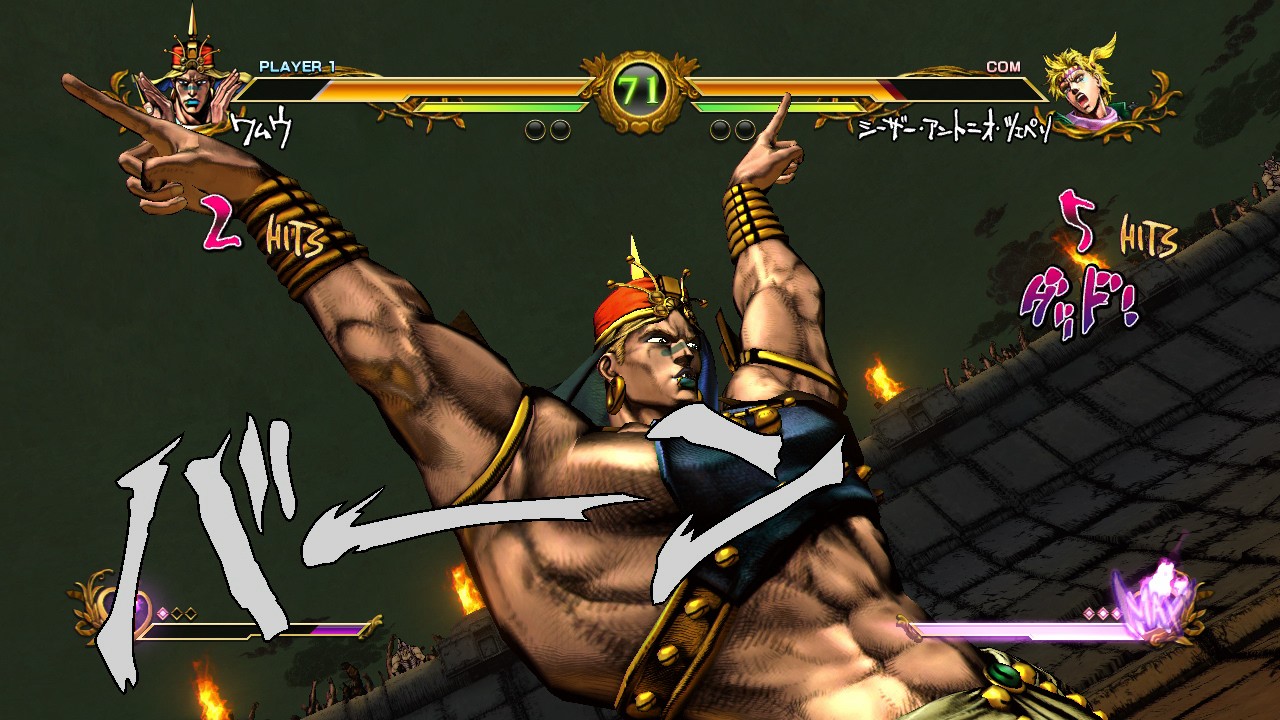 Jojo isn’t just worth your attention for the fabulous insanity though. This is one of, if not the most culturally influential manga in Japanese history. With over 20 years of success under its belt and no end in sight, Jojo is as much an institution as Dragon Ball, and there are more references to it spread across anime, manga, and games than almost anything else in history. It’s also shockingly beautiful, with wonderfully detailed character designs and environments. The series creator, Hirohiko Araki, is the only manga-ka in history to have shown his work at the Louvre, and he was also called on to design clothes for Gucci (only to be later told that his designs were too fabulous to physically exist). The game manages to capture this man’s incredible artwork perfectly, and that alone is worth the price of admission.

With such talent behind it, and such a cultural institution built around it, how is it that Jojo is so obscure in the west? The sad truth, as is often the case with these sorts of things, is copyright law. Araki loves to reference bands and music in the names of his characters, and not in subtle ways. The aforementioned ancient Aztec superman is named Wham, and one of his partners is just called AC/DC. Dio’s sidekick in part 3 is Vanilla Ice, while Jojo’s in part 1 is Speedwagon – “Robert E.O. Speedwagon.” It’s no wonder that manga publishers are hesitant to touch it with a ten foot pole. This definitely bodes well for All Star Battle, though. If Guilty Gear has taught us anything, it’s that fighting games where everyone is named for music are always good.

Not that the game particularly needs that boost. All-Star Battle comes to us from CyberConnect 2, the team behind the brilliant and stylish Naruto: Ultimate Ninja Storm series. If anyone knows how to adapt a manga into a fighting game, it’s them. And in Japan, their work has already been vindicated. Jojo is one of the best-selling games of the year, not to mention the best reviewed. It’s the 21st game ever to receive a perfect score from Weekly Famitsu (though that’s not quite as impressive as it once was), and it scored highly across the board.

Jojo’s Bizarre Adventure: All-Star Battle is, without a doubt, one of the best fighting games to come out of Japan in years. It’s got loads of mechanical depth, gorgeous artwork, and a huge, diverse roster of playable characters. It also happens to be a great introduction to a true Japanese institution. Jojo is one of the most fun, ludicrous, and imaginative fighting manga in history, and its influence can be felt in just about everything that’s come after it. If you’re looking for a solid fighter, a crash course on one of the most important works in manga history, or just general bizarreness, All-Star Battle is the game for you. So get hyped.