This past week, the teaser site “thesurvivor2299.com” updated to reveal new information. Based on the information, it is clear the site is either a countdown to the announcement of Fallout 4 or an extremely elaborate internet hoax. Either way, a new Fallout game is all but inevitable, so let’s take a look back at the last two Fallout games and see how they stack up against each other. Fallout 3 and New Vegas were chosen because they are very similar to each other (making them easy to compare) and because they are the two games in the series most modern gamers have likely played. Perhaps we’ll take a look at the first two games in a future Sequel Showdown, but for now let’s stick to Fallout 3 and Fallout: New Vegas.

When it comes to Bethesda’s unique style of open world role playing games, the design of the world is incredibly important. In order to keep the player interested for the hours upon hours they will spend exploring, the world must be interesting, varied, and full of compelling things to see and do. Now, comparing the Mojave Wasteland and the Capital Wasteland based on this criteria, it seems to me that the Capital Wasteland of Fallout 3 is the clear winner.

Playing through each of these games, it’s clear that Bethesda Game Studios has a ton of experience designing and creating these types of open worlds while Obsidian does not. Obsidian makes fantastic role playing games, but they had never made this kind of world before and there was just no way they were going to be able to create an open world of the quality that Bethesda typically does with New Vegas being their first attempt. The Capital Wasteland is full of unique settlements and interesting things around every corner. Places like Little Lamplight, Megaton, Tenpenny Tower, The Republic of Dave, and Underworld are all iconic and memorable locations that each feel unique and have their own interesting elements.

The Mojave Wasteland certainly has its interesting elements, but many of the locations you visit feel very similar to each other. Whereas Fallout 3 took real world locations and altered them in some creative ways, Fallout New Vegas feels like it takes place in a real world Nevada that’s simply in a state of disrepair. It just lacks the creativity in location design that Fallout 3 has. As an example, in Fallout 3 you begin the game in a town built around a nuclear warhead, but in New Vegas the game begins in an ordinary settlement in the desert. Towns in Fallout 3 are established on a boat, in a museum, on a highway overpass, in a complex cave system, and always have various unique aspects, even when the location is ordinary. The majority of settlements in New Vegas are just regular looking towns and groups of buildings that are really only characterized by the faction that calls it home.

In terms of exploration, New Vegas too often feels like it is preventing the player from exploring while Fallout 3 feels designed to encourage exploration. In New Vegas, there are too many areas you aren’t allowed to go unless you have alignment with a specific faction, which isn’t an issue in Fallout 3. It also feels like the overall size of the world in New Vegas is smaller than it is in Fallout 3. There’s smaller issues as well, like the fact that The Strip serves pretty much no purpose other than going to casinos. Don’t get me wrong, navigating downtown DC in Fallout 3 was an absolute nightmare, but at least there was some semblance of urban exploration.

Fallout 3 has the better world

When it comes to combat, there isn’t a whole that separates these two games. They are both built on the same engine, and thus share most of the same mechanics. The combat is nearly identical in each of these games, with a minor change in New Vegas being the addition of the ability to aim down sights. However, this is neither a positive or a negative, because the shooting in these games is such that you really want to be using VATS all the time anyway, so really neither the game has an advantage in terms of combat.

However, there are some improvements to other aspects of the gameplay that give New Vegas a slight edge. The addition of weapon modding was a welcome feature that gave you some customization over your weapons. Also, the improved companion controls were a nice touch, as was the option to play in hardcore mode, which adds survival elements. Let’s also not forget the card games, which many people may dismiss, but I found myself getting quite addicted to. A nice bonus with the card games was that it finally gave the luck stat a more tangible purpose. 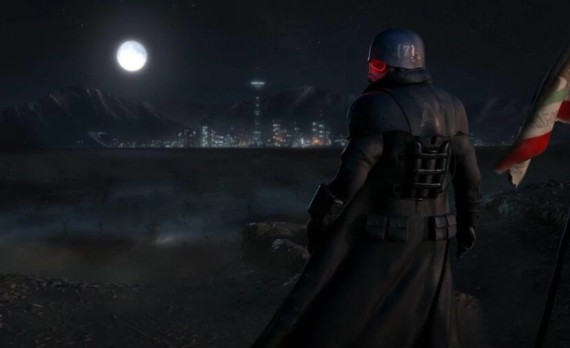 Bethesda Game Studios are among the best in the industry at creating interesting worlds and immersive experiences. They are not, however, among the best in the industry at telling compelling stories, but Obsidian certainly is. Obsidian developed games contain some of the best writing seen in video games, and their skill is on full display in Fallout: New Vegas. The plot isn’t really any better in New Vegas than in Fallout 3, but the narrative is monumentally better.

The dialog between characters, and also the dialog options you as the player are given are just flat out better in Fallout: New Vegas than they are in Fallout 3. You also have much greater freedom over how the story unfolds, with the interplay between the various factions and your choices allowing you to take several different paths through the story. I do think Obsidian’s scope may have overstepped the bounds of the game’s engine though, with the battle of Hoover Dam being one of the most pathetic displays of technical limitations getting in the way of story I have ever seen. That aside though, it’s clear that Obsidian is simply staffed with better writers than Bethesda.

While the story is fine in Fallout 3, the dialog and writing just isn’t as interesting, and the game suffers from a common video game narrative flaw; the motivation of the character not being shared by the player. The crux of the game is that the player character is supposed to be searching for his/her father, which is the driving force of the main quest. Well, the problem there is that you really only get 30 minutes or so to get to know your father at the beginning of the game. We know the character is supposed to have an attachment to their father, they were raised by him after all, but as the player we barely know anything about him. How are we supposed to care about finding a character we don’t even know? In New Vegas, the early game driving force is finding Benny, who we also don’t know much about, but what little you see of him is enough to make you want revenge. It takes much less time to make the player hate a character than it does to make them care about a character, which is why the early narrative sequences in New Vegas come across better than those in Fallout 3.

When it comes to characters, there really is no contest; New Vegas wins by leaps and bounds. As is unfortunately the case in most Bethesda games, the characters in Fallout 3 don’t really have much character at all. In typical Bethesda fashion, the world is the real main character, while most of the characters are inconsequential and underdeveloped. Obsidian’s strongest attribute is their writing and characterization, and it’s once again at the forefront of Fallout: New Vegas. When I think of developers that write compelling and interesting characters, my mind immediately jumps to Bioware, Naughty Dog, and Obsidian, so it’s not really surprising how much better the characters are in New Vegas compared to Fallout 3.

In New Vegas, the companions actually have back-stories and personalities, whereas in Fallout 3 they are basically just pack mules for when you’re over-encumbered. Getting to know Veronica, Arcade Gannon, and the other companions in New Vegas was much more interesting than any conversations in the entirety of Fallout 3. Additionally, all of your companions have a unique quest associated with them that adds to their characterization. It’s clear that Obsidian is used to developing party based role playing games that put a large focus on characters, and their attempt to use the follower system of Fallout 3 to bring that style of character interaction to New Vegas really enriches the overall experience. 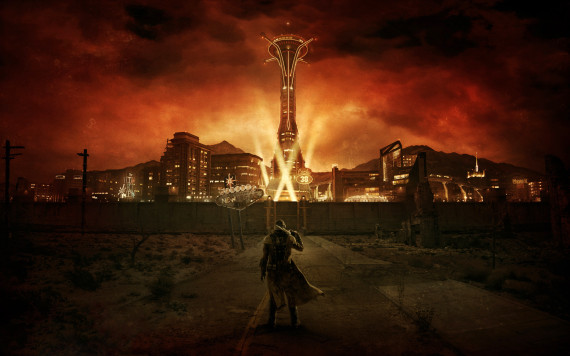 One of the most disappointing aspect of Fallout 3 for me personally was the absurdly small number of quests in the game. There were only 20 quests in the entire game, with the idea being that only major activities were added to the questlog while smaller tasks (that would have been quests in an Elder Scrolls game) weren’t logged as quests. I understand the sentiment of making only the major events count as quests, but it just makes things more confusing. It’s hard to keep track of the small not-quests when you don’t have a quest log to manage them. It certainly achieves the goal of making the quests feel more meaningful, but it makes the smaller tasks basically irrelevant.

Needless to say, Obsidian opted not to go with that system for Fallout: New Vegas, and the result is that endlessly addicting feeling of always having something to do. There are simply tons of quests in New Vegas that take you all around the game world. As far as quality of quests is concerned, each quest in Fallout 3 definitely feels more important, but that’s only because there are so few. There are definitely more menial quests in New Vegas, but it felt like there were just as many sprawling quests as Fallout 3, it just had smaller ones in addition to the bigger ones. Having all the different factions with their own specific quests was also an interesting aspect of New Vegas. 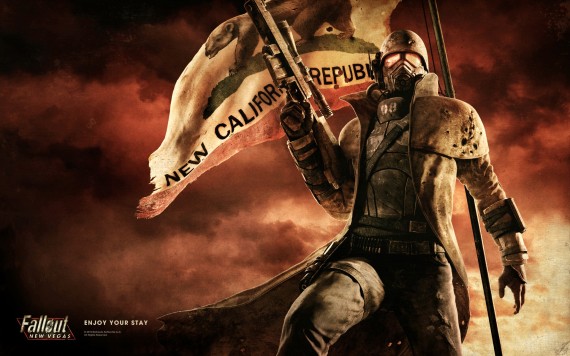 Well, it’s clear that Fallout: New Vegas is without a doubt the better game, but I’ll always have a soft spot for Fallout 3. Of course, an extremely iterative sequel like Fallout: New Vegas will usually win in a head to head matchup like this. Obsidian was able to take everything that was great about Fallout 3 and bring their own strengths to the table to create a game that is quite simply better in almost every way. However, if I think about what game I enjoyed more, it’s probably Fallout 3. Fallout 3 was a much more “important” game, being the revival of a classic series and the first game made in this style. The revelatory experience of playing Fallout 3 for the first time back in 2008 is one that could never be recreated. Playing Fallout: New Vegas for the first was much less of an event, it simply felt like a slightly improved version of Fallout 3. So, while the people that played Fallout 3 first (including myself) probably got more enjoyment out of it than New Vegas, there is really no denying that Fallout: New Vegas is the better of the two.