War of the Vikings has been out on Steam Early Access for a little while now, and around the time it was released, we brought you a preview that gushed about the game’s impressive map design, and how it perfected War of the Roses’ slick-but-complex combat-system. The other day we were lucky enough to get early access to some brand new content that’s being released in the game’s transition from Alpha to Beta (which is happening today), and we even got a chance to ask a few questions to the game’s producer, Gordan Van Dyke.

To kick things off, one of the biggest things coming with the release of the Beta update is Conquest mode. While the main objective in the game-type is to take-over control-points across the map, you can’t compare it to the mode of the same name popularized in the Battlefield series. Rather than being able to take control of whichever point you’d like whenever you’d like, things are more sectioned-off and linear — in a surprisingly appealing way. Where in a more Battlefield-like Conquest mode you could easily sneak behind enemy lines and capture any control-point, there are only ever two control-points at play: the one you’re defending and the one you’re attacking. These two points are typically only a bit over a hundred yards apart.  As is important in a game so focused on melee-combat, this ensures that there are no alternatives to direct-conflict. Once the enemy begins capturing your control-point, theirs becomes locked and vice versa. While it may not seem like much, these decisions really help promote combat, rather than sneaking around and secretly capping points. The game is either won by one team capturing every control-point on the map, or by one team owning a majority of the points once the timer runs out. However, on the map “Docks,” there can be a draw, as there is an even number of control-points in it. Like most modes in the game, conquest will eventually support sixty-four players. 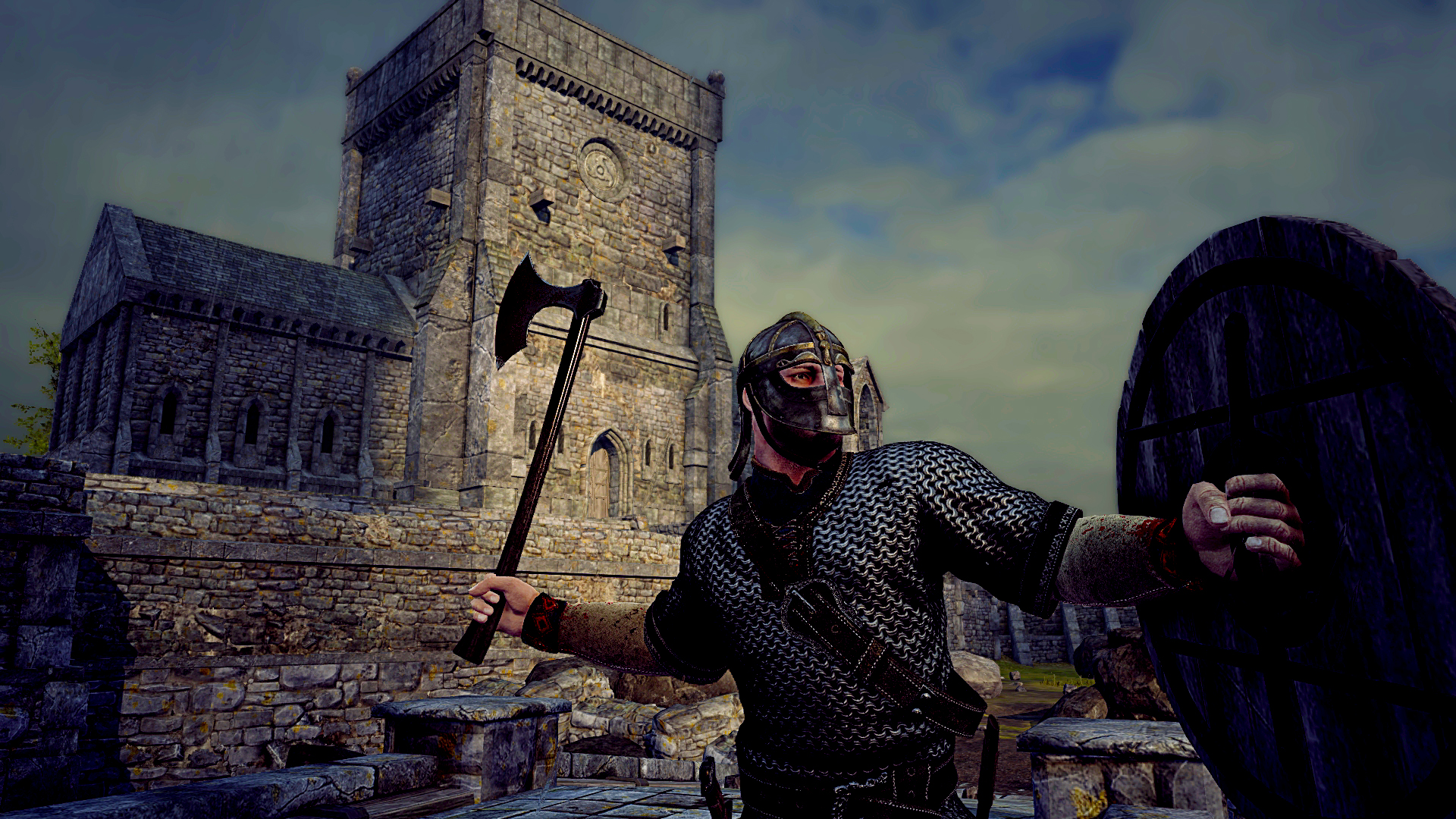 While it won’t be fully implemented until a later date, the release of the Beta will also give players their first glimpse at the game’s “BattleChatter” system. As Van Dyke explains, the system is in place to “…immerse our players and give them a lot of audible feedback so that the world around them is kind of alive and giving them responses, and bringing them into this environment.” BattleChatter is basically an answer for those who don’t want their immersion broken by the need to communicate with other players. Whether it’s that you don’t want to hear other players screaming over their headsets, or you don’t own a headset and don’t want to type-out the classes of nearby enemies, BattleChatter should have you covered, as player’s avatars will shout important information dynamically. If you’re wounded and a teammate heals you, your character will say “Thank you.” If an archer shoots near you, you’ll shout “Archer.” This may not be a revolutionary concept, it’s been seen in many other games, but they are going to some pretty great lengths to make the feature fit the time-period.

Given you’re playing the North American version of the game, your team’s BattleChatter will always be in English spoken in faction-appropriate accents. But your enemies, whether they be Saxons or Vikings, will either be speaking Old English or Icelandic respectively. Additionally, we’ve been assured that all of the voice actors for each faction are genuine, fluent speakers of the languages. This will – ideally – help simulate the confusion caused be the language-barrier that existed between the Saxons and the Vikings. As we said earlier, though, it won’t be fully implemented until a later date. However, while we didn’t get to see it in action, it should be functioning for the Warrior class with the Beta update. 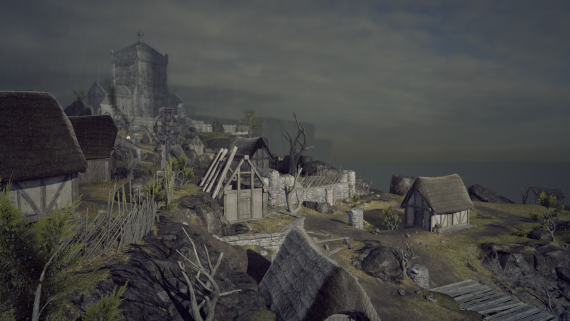 And then there’s the new weapon-type: the Spear. Unlike the current melee weapons in the game that have a left-swipe, right-swipe, and a downward-slice, the Spear only allows for an upper-stab, or lower-stab. If our time with the weapon was any indication, though, those stabs are devastating. As Van Dyke explained, however, the Spear does call for an exceptional amount of precision if it’s to be used with any effectiveness; and it should be used while you’re with other troops, rather than while running-around on your own (which you really shouldn’t be doing in this game anyways). As such, once customizable classes and weapon-unlocks are introduced, the Spear will be a high-tier weapon, and will therefore take longer to gain access to than the other weapons. Since those unlock systems aren’t in place yet, though, the Spear is available to all players for the Beta.

As for new environments to slaughter other players in, today’s update brings-forth two. The first of which is Cliff, a map that can be played in either Team-Deathmatch, or the new Conquest mode. Cliff has its players in a small, English village near the ocean. It’s, of course, quite dreary; but garnished with bright greenery and looks as you’d expect it would, with buildings and pillars adorned with crosses, and fog looming all over. The map hosts TDM skirmishes well enough, but truly shines in Conquest. The Vikings spawn on a rocky trail near sea-level that leads to the village, and the Saxons spawn at a sub-village that is connected to the main one via bridge. As most games of Conquest begin, both teams scurry to the capture-point closest to them, and the run to fight-over the one in the middle. The three capture-points in the middle are rather easy to access, though as we mentioned earlier, once all of the points have owners, only the two that you are currently defending and attacking are in play. Where things start to get the messiest, though, is when a team pushes another to their final control-point. Each team’s final control-point can only be accessed by traversing an incredibly narrow choke-point, in both team’s cases, a bridge. This gives the struggling team a chance to redeem themselves, as the long, narrow path makes their enemies easy targets. And, while it is rather short, there is a respawn-delay. These final-stretches to victory/possible-failure are incredibly tense, but are always rewarding… granted you’re on the team that wins. 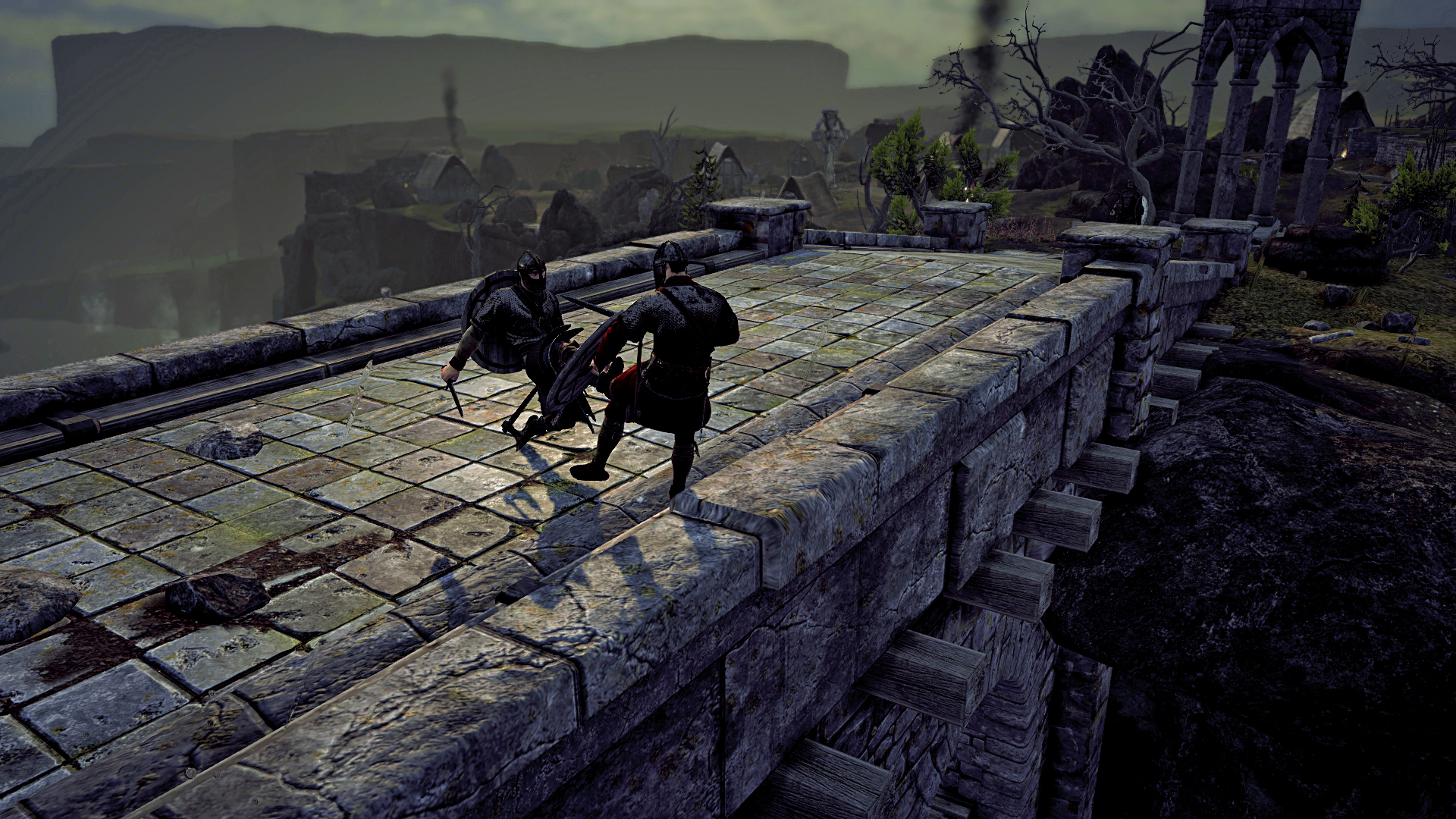 The second, and final, new level is Sanctuary, a map that can host both Arena and Team-Deathmatch games. It’s set in a foggy, broken-down, well, sanctuary. Unlike most of the game’s maps that feature vibrant colors, Sanctuary is incredibly dark. Aqueducts full of water surround the map’s center-most battlegrounds, and despite it being a fairly small map, there’s a good amount of versatility within it. It appears to be a solid addition to the game’s already impressive set of maps.