The Holiday Express popped up on Steam the other day and, being a sucker for toy trains and Christmas, I found myself utterly unable to resist its $3.00 charms.  As a bonus it’s part of the Train Simulator series, so it has the added effect of offering a taste of a game I’ve always had some curiosity about.  Who wouldn’t jump at the chance to try their hand at being a sim toy train holiday engineer?  Opportunities like this don’t come along every day.

What you get with The Holiday Express is a cute little five-mission, two tutorials, video game equivalent of a mug of (all ages) holiday cheer.  Driving a train around the living room, behind the furniture, into the walls and across the mantelpiece is every bit as charming as you’d hope.  If you’ve never played a train sim before it can take a bit to get to grips with the acceleration and braking speeds, making it easy to derail as you shoot around a corner too fast, but a little practice will sort that out.  It doesn’t take long to start linking up the cars and managing the railroad’s switches to bring the haul to its proper destination.  If you’re feeling properly adventurous you can even break into the editor and create new rooms and scenarios of your own.  Cute and festive as it is, though, The Holiday Express is in desperate need of a final round of polish.

It’s hard to gripe too much about a $3.00 game when it’s as charming as The Holiday Express, but parts of it simply don’t work.  Low-res textures and furniture with ultra-sharp corners is one thing, but sections of the track are doing things the game engine doesn’t seem designed to support.  It’s far too easy to derail the steam train when going over track without any supporting ground beneath it, even if you’re traveling at an appropriate, steady pace with no change in speed.  The diesel engine doesn’t have this problem (or at least I didn’t experience it) but the steam engine is virtually unplayable if you want to explore the higher reaches of the living room.  Other problems involve a camera that clips through anything, zones clearly marked as the goal but require a restart of the scenario when they don’t register properly, and no way to skip the pre-mission briefings.  Also worth noting is the difference between The Holiday Express’s description, “A winter storm has scattered the presents and decorations around the house and they face a race against time to find them before Christmas day arrives.”, and the actuality of four simple scenarios to warm up with and a pleasantly complicated one to finish off, none of which have anything to do with the game’s description.  It’s lovely and fun and very Christmas-y, and the cheap cost makes overlooking the game’s issues easy, but unless the developer puts some serious time into cleanup there’s no way it will be worth the post-Christmas $19.99 price tag.  For right now, though, and throughout its December sale, The Holiday Express manages to rise above its low-budget nature to by sheer force of seasonal cheer. 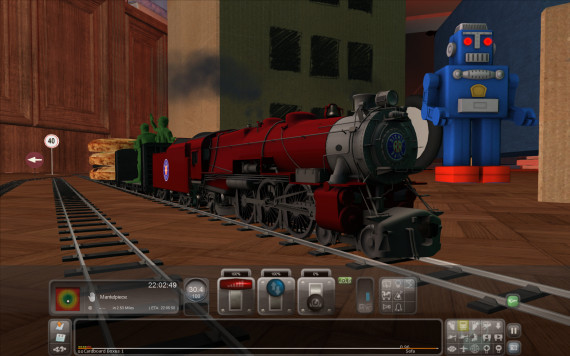 After taking the steam engine up a very long 1 in 10 graded slope, I finally can personally relate the the classic children’s tale of The Little Steam Engine That Could.  Starting at a nice 40+ MPH and watching all that speed leech away as the combination of the rise and the weight of the cars slowly take their toll is a nerve-wracking experience that completely justifies a chant of “I think I can.”  Pure bull-headed steam engine determination isn’t guaranteed a victory, but it feels great when it happens.  More importantly, you never know when you’ll find context for the stories you took for granted when you were a child.