For many Sonic fans, Sonic the Hedgehog 2 is the pinnacle of the franchise. The game has been re-released several times since its debut on the Sega Genesis in 1992, but none of those iterations have officially included the Hidden Palace Zone until now. Christian Whitehead and his teammates at Sonic Retro have revived the forgotten stage for the remastered mobile release. Originally created to display Sonic’s transformation into Super Sonic, Hidden Palace Zone was scrapped after the decision was made to grant players the ability directly after obtaining all seven chaos emeralds. Although corrupted fragments of the stage can be found on the original cartridge through game enhancement, this marks the first time the level has appeared in its completed form. The question is, is it any good? 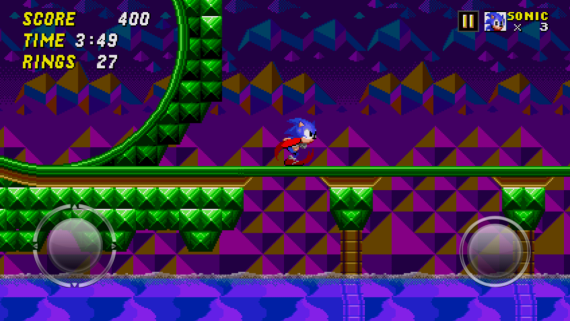 Even after its publicized resurrection, Hidden Palace Zone is designed to remain hidden. In fact, many players familiar with Sonic the Hedgehog 2 probably won’t find it on their first play-through of the mobile version, and I think that’s a great design choice. I stumbled upon it when I overshot a jump in Mystic Cave Zone Act 2, expecting to fall to my death in the spike pit every other version of the game had taught me was there. Instead, I kept falling, all the way down to Hidden Palace Zone. It was a terrific moment of childlike wonder that really took me by surprise, and I commend the developers for that.

The first thing you notice about any sonic level is its music, and fans will recognize Hidden Palace Zone’s is the same as that found in the two player version of Mystic Cave Zone, which may be a bit disappointing to some. It’s not the most memorable track you’ll find in a Sonic game, but it suits the stage well. The level is taller than it is long, making it suitable for explorers and speed demons alike. In true Sonic fashion, there are a multitude of ways to make your way through the stage, and a nice balance of speed and platforming throughout. That being said, there isn’t a lot to find in Hidden Palace Zone, and overall it feels a bit bare. 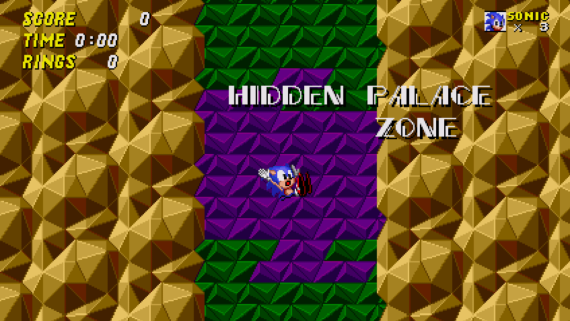 There are a few bespoke elements, such as glowing bridges and dinosaur-inspired badniks, but the stage doesn’t do enough to make itself memorable. Other one-act stages in Sonic games are unique and exciting experiences, but Hidden Palace Zone feels incomplete without a second act. There’s also a notable lack of difficulty in the stage, making it feel like exactly what it is: a bonus level. The most exciting addition it brings is arguably its brand new Robotnik boss battle, which is pleasantly challenging; Robotnik’s Egg Mobile is outfitted with a musical device that causes bombs to drop from the ceiling, and it’s a fun battle even if it seems a bit out of place after the watery caverns of Hidden Palace Zone.

Fans wills be happy to finally experience the stage after all these years, but it’s disappointing to see Sega play it safe on a level that had so much room for creativity. I personally would have liked to have seen them develop a brand-new second act for Hidden Palace Zone, which could have allowed them to realize the stage’s full potential, and reminded fans that they can still create terrific Sonic experiences in the vein of the hedgehog’s hey-day. Don’t get me wrong, it’s not a bad stage; it plays well, and doesn’t feel out of place in Sonic 2 as a whole, but it’s not the perfect addition many fans will have hoped it would be. 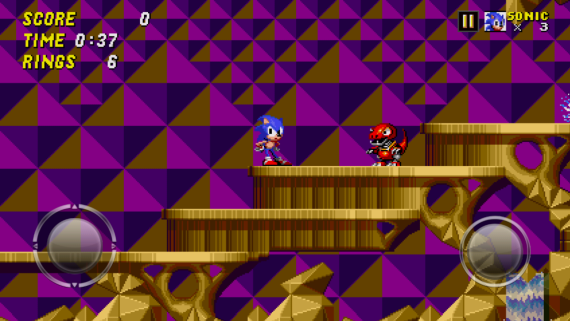 All in all, the Hidden Palace Zone is a nice addition to a time-tested classic. It’s very much a bonus level, and won’t blow you away, but it’s a fun experience while it lasts. Luckily, it’s an optional stage (as long as you don’t miss that jump in Mystic Cave Zone), so players who want to play the game as originally intended still can. But if you feel like experiencing the return of a long-lost Sonic 2 stage, it’s well worth your time; just don’t expect anything earth-shattering.