The UK based online retailer Zavvi.com made kind of a huge mistake last month, and are trying to rectify it in the most depressing way possible. Several customers had preordered Tearaway because they have good taste and could tell even in the past that Tearaway was going to be excellent. Zavvi, being a generous kind of company, decided that as a reward for getting such a great game, they would send the customers a free Vita. As it turns out, they were not the winners of the “buy a game, get a free system” special promotion but of the “buy a game, oops we messed up” special promotion. A less well-promoted offer, but far more satisfying and hilarious.

Zavvi was far less amused and quickly acted to rectify the situation. It turns out the whole thing resulted from an error in their warehouse. Luckily, they took immediate action to ensure such a mistake would not happen again. They terminated those responsible for the errors, redid their inventory, and restructured their online ordering system to prevent – hahahahaha nah, I’m just kidding. They threw a fit, blamed the customers and demanded they send their Vita’s back or else they’d pursue legal action. Things start off friendly enough, and after realizing their error Zavvi contacted their customers with the following message:

“We are very sorry to inform you that due to an error in our warehouse we have dispatched the incorrect product.
We are contacting you in order for us to arrange a collection of the incorrect item which is on the way to you.
If possible, please keep the parcel in its original packaging ready to hand back to the courier.”

As their client base was flush with proper British gentlemen, some people actually complied and sent back the awesome thing someone gave them for free. Unfortunately for Zavvi, not all the customers were so gentlemanly and agreed to comply with the request that they give back the stuff they already received and probably opened and sold on eBay. Citing the British common law statute of 1837 titled, “finders keepers, losers weepers”, they simply ignored the request and went on about their lives with their two PlayStation Vitas, presumably playing Tearaway in one hand and Gravity Rush in the other. They were living like kings, until Zavvi decided to amp up the pressure to crazy levels and sent out the following letters (courtesy of darkzero). 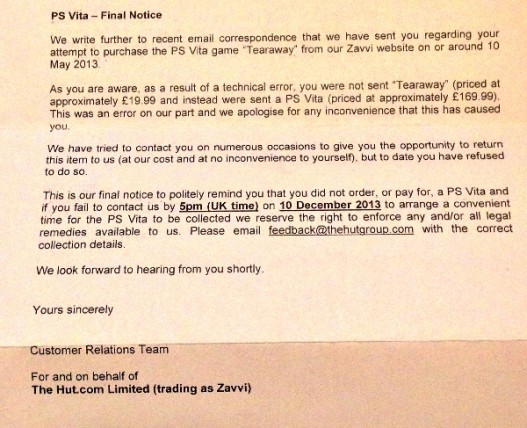 If you didn’t feel like reading all of that (seriously man, it’s like 100 words I shouldn’t even have to summarize this), the gist of it is “give us back our crap or we’re telling the cops on you.” Sending people something and then accusing them of theft is a lot like licking someone’s face and accusing them of sexual assault, and Zavvi should at least be aware of how bad this looks from a PR perspective. I fully expect next year they will be rummaging through people’s homes, taking old video games and family photos and claiming those were sent out by mistake as well. While the court of public opinion has ruled that this is a jerk move, whether or not Zavvi has an argument from a legal perspective is more interesting. There seems to be some conflicting reports on the matter, as something this stupid appears to not have happened before, and thus is confusing legal scholars on how exactly it should be dealt with. For example, the aforementioned website cited the following argument on why the people did NOT have to send their Vita back.

“The Distance Selling Regulations are very clear on this. If you’ve been sent unsolicited goods, you are entitled to treat them as an unconditional gift and do with them as you choose. You are not required to keep them for any amount of time and you are certainly not required to pay for them. Any attempt to demand payment (by threatening means or otherwise) is unlawful.”

Again, this legal argument (termed the nana nana boo boo, stick your head in doo doo defense) is wildly cited and known to most every expert in the law. It was most recently brought up in the Supreme Court case of Finders v. Losers, with the justices siding 6-2 with the Finders, declaring that “finders were indeed keepers, and losers were out of luck, and should perhaps stop being so weepy about the whole thing”. However, Eurogamer received the following argument from a consumer watchdog group that turns that whole argument on its head.

Consumer watchdog Which? has told Eurogamer that it believes customers will have to return the PlayStation Vita consoles sent in error by Zavvi. “If a consumer has received goods by mistake then they are not legally entitled to keep them,” a Which? spokesperson explained, contradicting some of the advice offered below from other sources. And, should Zavvi follow through on its threat and sue customers, Which? believes that a UK court may actually side with the retailer. “In any legal action the ruling is likely to be that the item should be returned because it was sent in error,” the company concluded.

It is unclear whether or not Zavvi will actually pursue legal action against those refusing to return their Vitas, but this is shaping up to be an epic legal battle. Finally, we will find out which is superior: finders keepers or takebacksies. This is a conundrum that has confounded judges for generations, at it looks like we might finally get a resolution to the age old debate. It seems like a tremendous waste of time (and money) to take someone to court over what basically amounted to $200, and with an amount that small the case is likely to be kicked down to a smaller court, or Judge Judy. And that is if Zavvi actually goes through with the whole thing, as the letter could have just been a scare tactic to round up some more Vitas from the easily intimidated.

While we wait until Zavvi decides what their next move is, I would recommend our British readers find somewhere more competent and less evil to buy their games from. Actually, scratch that. I’m heading over to Zavvi right now. There is like a 50% chance that they will end up sending me their CEO’s credit card information if I buy a stick of gum.