It’s been a very long time since Jumpman was last seen.  He had two games on the Commodore 64, a DOS remake by Apogee and a few fan updates, and then… nothing.  The years have rolled by with the series basically dead, but one of the people who bought the rights from Jumpman’s creator, Randy Glover, never got around to using it and figures now would be a good time to try a Kickstarter campaign.  With a very few days left on the clock a demo has been released, so we can finally get a feel for how this new version should work.

First, though, why on earth would anyone care about a 30-year-old Commodore 64 game?  Well, I’m glad I’m pretending you asked!  Jumpman was pure single-screen platforming bliss, with each of its 30 levels offering a new variation on the action.  You’re Jumpman and you need to collect all the orange circles (they’re supposed to be bombs, I always called them crystals, and they were really six pixels arranged in an oval) to complete the level.  The basic structure of the level involved ladders, girders, and ropes, and plotting a course through it all was made more difficult by bits of the level tending to be created or erased when a bomb is collected.  The way Jumpman navigated the levels was also unique, in that so long as any part of him touched a platform or rope he’d automatically climb on to it.  Straight ropes are for descent, jagged ropes for ascent, and he can jump off at any time.  Mastering the levels meant being in constant motion while taking into account Jumpman’s full body area, because landing a jump is more about touching a platform than landing his feet on it.  Unlike modern jumping heroes, however, Jumpman can’t fall too far before it counts as a death, leaving him to tumble to the base of the level.  Still, he does collect any bombs he touches on the way down, and completing a level by flailing into the last one is always a great gaming moment. 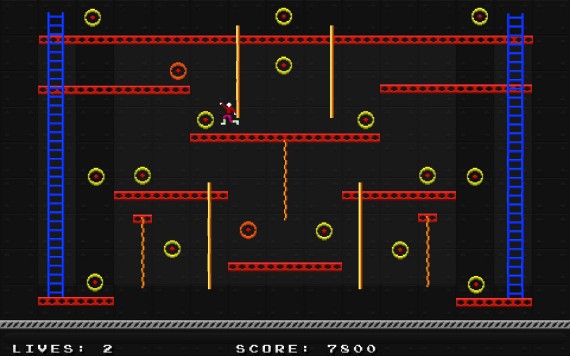 The other notable aspect of the original Jumpman is that every level is something different.  One level collecting the bombs activates robots, who will move for a bit before settling down again until the next bomb is collected.  Another replaces the floating bullets with bigger squares that force a jump in a random direction when they hit.  Or replace the bullets with hail that bounces down the platforms from the top of the screen, and of course the level is all about climbing to the top.  Or Jumpman makes a small explosion at his feet when he jumps, requiring careful positioning in order to not destroy a section of the level you’ll be needing later.  Or many, many, many other tricks and surprises.  The level design is, not to undersell it, simply fantastic and endlessly creative.

This puts the Jumpman Forever campaign at a disadvantage.  Following up a genre classic (obscure, yes, but still classic) isn’t easy, and the demo is of an incredibly early version that still needs serious tweaking and bug-squashing.  The bullets that randomly wander the screen are unfairly fast, the distance you can fall before it counts as a death varies depending on the game’s mood, and ladders are almost impossible to walk onto and off of.  The basic controls, though, feel like Jumpman in all the right ways.  The speed of movement, jump distance, ledge grabbing, and level design all feel right, and while the variety of challenges doesn’t seem to be there quite yet, the demo is also ridiculously hard so I’ve only seen 5 of its 8 levels. 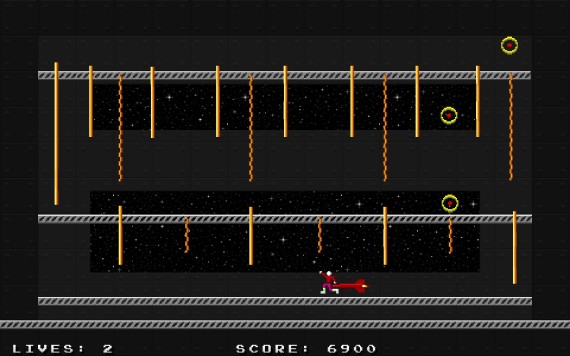 While the Jumpman Forever demo has its issues, it’s a promising start for a proper Jumpman revival.  Most of the important bits are in the right place and the issues with it being buggy and frustrating are admitted to up front by the developer, so odds are good they’ll be addressed once the project gets past it’s “quick & dirty demo” stage.  If this sounds like I’m giving Jumpman Forever a positive write-up based on nostalgia and wishful thinking, I’d have a hard time arguing otherwise.  Jumpman was unique and awesome, and its style of platforming isn’t one that’s seen much in the way of revival.  If Jumpman Forever gets the polish and creativity it needs, it will be a welcome return of one of gaming’s lost platforming icons.