Assassin’s Creed IV: Black Flag didn’t entirely feel like an entry in the main series. Naturally, there was the familiar conflict we’ve been following indistinctly, as well as a main character whose life transforms after donning the signature outfit. Most of the features made a return as well, with an assortment of jaded figures to pardon from life, and a large, detailed map littered with diversions to explore. It’s strange, then, that its most distinguishable asset came by way of a makeover. With a passable tale as a compass, its piratical world was a boundless playground, offering a level of freedom formerly only teased. This makes it all the more surprising that its DLC, Freedom Cry, has a shocking and almost cynical lack of freedom for a story about an escaped slave.

Fortunately, this constriction is not without its purpose. In Freedom Cry, the openness we’ve come to appreciate takes a backseat to a powerfully emotional journey, following the struggles of Adewale, Kenway’s first-mate in Black Flag as he finds himself in the French-run town of Port-au-Prince. The story revolves around liberating slaves, and establishing a revolution that will put a stop to the atrocities committed by the vicious plantation owners. Freedom Cry isn’t afraid of showcasing the cruelty of slavery at every opportunity, either, with slave auctions and torturous beatings happening in plain sight. 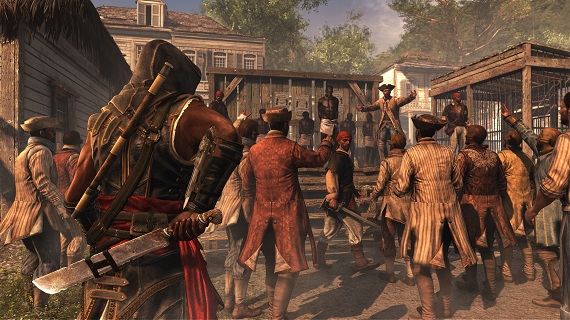 Perhaps its greatest strength is in its righteous narrative, brazenly touching on subjects mostly unseen in gaming; such as the struggle of living under the literal whip of oppression, and the constant trading of human lives. It’s a bracing tale, especially when compared to the carefree telling of Edward’s exploits, and serves as a strong motivation to liberate the captured slaves and assemble a worthy resistance; both of which are mechanics that help to drive the story forward.

With side-missions cleverly integrated into the brewing revolution, your actions outside of the main quest feel as if they’re bettering the city, despite serving the mostly superficial purpose of unlocking upgrades. It’s the moral cross that weighed heavy on my conscience, though, more so than the need to complete every slave-saving opportunity I was thrown — of which there are far too many. Yet, it’s a suitable arrangement, as your position in the narrative easily justifies the repetitive nature of such actions. Unfortunately, the same cannot be said about the returning diversions of Black Flag. There’s a lack of solidarity throughout the adventure, partly due to the drastic shift in character. It simply doesn’t make sense for Adewale to dive for treasure or go whaling, making much of that content feel like filler.

Ship boarding makes a return, though, only with a slightly sharper difficulty curve. This time around, most ships you battle are surrounded by protective boats, demanding a more strategic approach than the fire-and-swerve methods that worked so well in Black Flag. There is, however, a feeling of fulfillment following the destruction of an enemy ship, if only until you’re reminded of the captured slaves trapped beneath the deck, drowning helplessly. Even when boarding a ship, there are simply too many lives that cannot be saved. It’s a difficult situation accompanied by a heavy dose of moral ambiguity that is often a reminder of just how nasty reality can be. 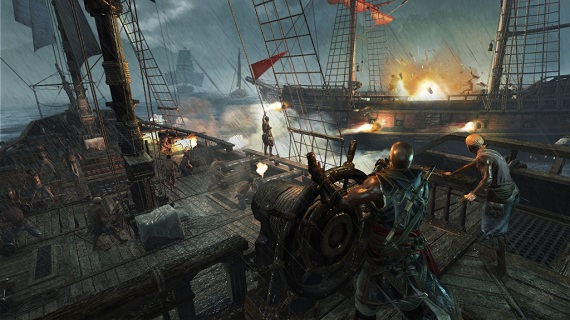 Thankfully, Adewale makes for a far more compelling leading-man than the plainly charismatic Edward Kenway, as his life is unlike that of most Assassin’s Creed protagonists. Despite being a pirate ship captain and assassin in his own right, Adewale knows the plight of slavery, and that pain reflects in each swing of his large machete, making for a far more satisfying feeling of progression. Adewale carries himself with a sense of pride; both in his people, and the code hes sworn to uphold. Ultimately, that’s the driving force behind many of his actions in game, and helps justify much of the violence.

Although a majority of the story takes place in the town of Port-au-Prince, there’s a small chunk of ocean and several islands that play hostess to various treasures and activities. Even so, being as the entire experience is narrow and more focused than Black Flag, the optional checklist of tasks feels like a perfunctory addition. While Port-au-Prince itself is not a particularly thrilling location, it does register as a distinct town, and offers much of the same diversity as larger areas in the main game, in spite of its overall denseness. You can hunt, collect and explore to your hearts content, but the feeling of child-like wonderment that accompanied the first few discoveries in Black Flag is nowhere to be found.

However, the problem with Freedom Cry isn’t its compact setting. Though the story is an improvement on that of the main game, and certainly a compelling one, it takes an unusual step backwards in one of the most impressive aspects of Black Flag. From a technical perspective, Freedom Cry quite clearly lack refinement, with many returning rough edges from Black Flag far more discernible now, as well some glitches that can occasionally break a mission, or make combat trickier when Adewale disappears into the ground. Fortunately, game breaking bugs are few and far between, with the more frequent glitches found in the animations — which seem to lack polish, as well. 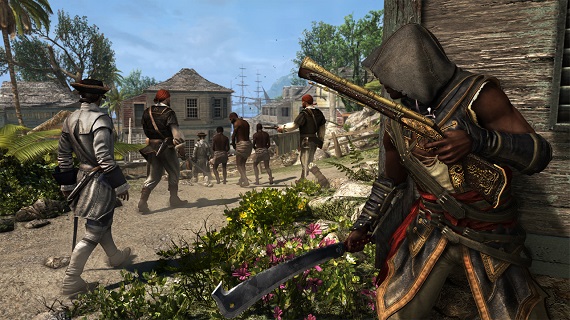 There’s a lot to love about Assassin’s Creed IV: Black Flag Freedom Cry. Its darker theme and moments of genuine sadness make for a captivating adventure, while the “new” lead character and his evil-thwarting machete serve the most satisfying form of justice. Unfortunately, multiple technical glitches and underutilized mechanics hold this DLC back from true superiority. But with around 5 hours of content — most of which is engaging — it’s hard to pass on a chance to reenter the world of Black Flag, even if it’s a smaller, more close-set version. Freedom Cry is simply a great addition to an excellent game, offering a story worth experiencing across a setting worth exploring.