Super Smash Brothers is that game that transcends fandoms. It firmly goes out of its way to be appealing from the furthest distance and from the cloudiest viewpoint. Some can say that Nintendo recycles Zelda or Mario ad nauseum all they want, but that argument doesn’t hold water with Super Smash Brothers. It’s one of the most prolific series in modern gaming, gathering innumerable fans and being a game that has been statistically proven to sell Nintendo’s systems. But it’s been a long time since the series appeared on the Nintendo 64 and many other games have attempted to use the series’ fundamentals as their own frameworks. Some games have even changed up the party gameplay in fresh, new ways, but every time, it doesn’t prove lucrative. So why is Super Smash Brothers so immune to submission? Even with games that improve upon Super Smash Brothers’ concept, why is Nintendo’s crossover title still the gold standard of multiplayer fighting games?

Super Smash Brothers was the brainchild of Masahiro Sakurai and Satoru Iwata. Originally pitched as a multiplayer fighter with original characters, Super Smash Brothers was Sakurai’s answer to the growing technicality of fighting games. Dissatisfied with the complexity of tournament play, Sakurai developed a fighting game with simpler controls and a perspective that was more in-tune with a 2D platformer than a traditional fighter like Street Fighter. After showing the game as a prototype with characters like Mario and Fox, Sakurai and Iwata’s idea was approved by Nintendo. Better yet, they were given permission to keep the Nintendo characters in the game. Super Smash Brothers was released for the Nintendo 64 in 1999, earning popularity and sales from fans. The series became an even bigger hit with Super Smash Brothers Melee on Gamecube, which introduced new techniques, a larger roster, more modes and an even bigger respect for Nintendo’s many franchises. It became the best-selling Gamecube game of all-time. Super Smash Brothers Brawl for Wii continued the series’ tradition of mass Nintendo fan service, with a crossover story mode and broader roster, all while delivering the trademark multiplayer chaos that the series has ingrained in its DNA. 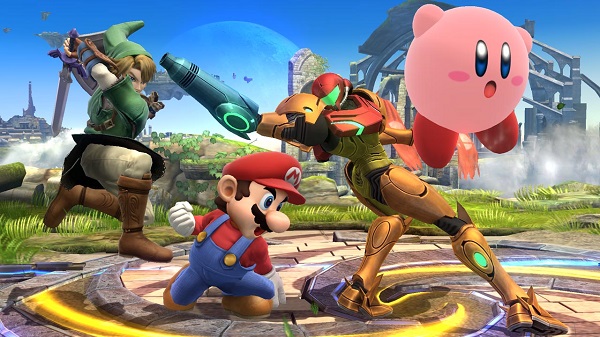 As you might guess, Super Smash Brothers has become one of the most popular gaming series of all time and one of Nintendo’s most powerful IP’s. It pioneered the subgenre of fighting games that based itself on chaos over precision, removing the technicality of Street Fighter and replacing it with accessibility. While games like Power Stone had already begun this fascination with multiplayer fighters, Smash Brothers is where it hit its stride. Learning the moves of your favorite character was easy and fun, but gradually improving toward mastery is where the series’ longevity began to take root. Playing against three friends in multiplayer was not only a brilliant and addictive idea, but it took advantage of the Nintendo 64’s four controller ports and embraced the party atmosphere.

You could also attribute the series’ appeal to its roster: a cavalcade of characters from Nintendo franchises. Mario, Donkey Kong, Link, Pikachu and even those folks from more obscure Nintendo franchises like Earthbound’s Ness were able to beat the crap out of each other. It was Nintendo’s way of paying tribute to its own history, a celebration of what earned it so many devoted fans. The moves of each character were pitch-perfectly implemented. Mario’s fireballs, Pikachu’s Thundershock, Link’s bombs and Samus’ Screw Attack were the tip of the iceberg, fully representing each character’s gaming legacies. The game even got to expand already established characters’ profiles; we wouldn’t have Captain Falcon’s Falcon Punch if it wasn’t for Smash Bros. 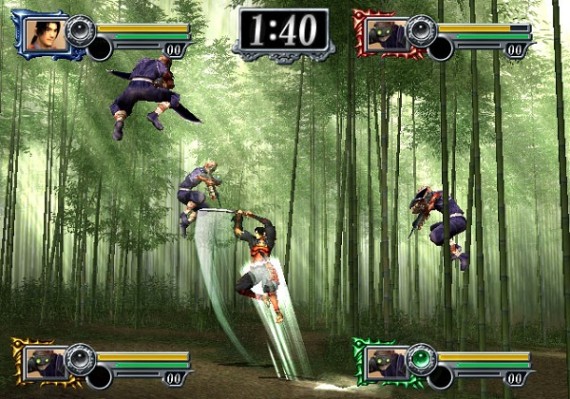 But times have certainly changed and the Smash Brothers formula is no longer isolated to Nintendo. Countless games have shared that idea of party-based appeal and frantic combat. Licensed properties like Teenage Mutant Ninja Turtles and established IP’s like Viewtiful Joe have all gone after multiplayer fighters in the same way that Smash Brothers did nearly 15 years ago. The format clearly has appeal; it’s not a complex perspective and it generates that rush of excitement when you fling a character off-screen. Its simplicity also appeals to the younger crowd who would find the intricacies of Street Fighter IV to be overwhelming, especially online, and the local multiplayer generates a familial vibe, one that can be shared with parents or siblings without feeling too passive and subdued. Even more serious IP’s like Onimusha have (in a kind of tongue-in-cheek way) approached this concept. Dashing for health items and bashing an opponent into submission has put a goofy twist on franchises that prided themselves on drama and seriousness.

But the clearest rival to Smash Brothers since the series’ inception was Sony’s Playstation All-Stars Battle Royale for the PS3 and Vita. Sony collected a roster of 20 characters (24 if you include the DLC) and put them in a crossover aesthetic that would not be out-of-place in Smash Brothers. From the items to the stages to the taunts, it all clearly paid homage to that long-tread multiplayer fighter vibe. But Sony also went a few steps further with a vastly superior online infrastructure than Super Smash Brothers Brawl’s and a different approach to KO’s, where Super moves were powered by AP orbs and were the only way to defeat your opponents and score points. It was labeled as a Smash Brothers clone from the very start (even in a leak, before it was officially announced), but upon its release, it really became more than that.

However, Playstation All-Stars did not release to the same level of excitement that its hype had implied. It earned average ratings from critics and did not reach the level of sales as was expected. Despite some DLC characters, support for the game withered and it was labeled as a massive disappointment for PS3 and Vita owners. Playstation All-Stars Battle Royale faded into obscurity throughout 2013, but why? The game was not a Smash clone in the same way that any other game like it was. Superbot Entertainment ambitiously threw away the notion of simply copying Nintendo’s gameplay and generated an idea more in common with the power-up levels in the Sony series Modnation Racers. Sony’s massive support for PSN was miles beyond the unavoidable lag in Brawl’s online play and the support for tournament fighting and trackable stats through your profile were Sony’s method of making the series competitive. It was a very different approach to Smash Brothers’ concept and in that regard Superbot deserves a LOT of props.

So, it still stands: how is Smash Brothers still on top of its genre? Why has nothing dethroned it yet? There could be a number of reasons. First, the combat is still extremely accessible. It’s something that does have its level of skill-based technicality, but it never alienates the younger crowd either. Sakurai’s vision of creating the alternative to venerable fighting games, to create the “anti-Street Fighter”, was clear as day and it paid off big-time. Games like Power Stone or Viewtiful Joe: Red Hot Rumble were simple, but their gameplay never reached an evolved state. Getting good at the game wasn’t as rewarding as mastering the mid-air item grab or standing dodge in Melee, since the game never demanded a tremendous amount of skill to provide a win. On the opposite side of the spectrum, though, Playstation All-Stars tried to make the game too technical. Simply tossing a character off-screen wasn’t an option; all you could do was damage the opponent, grab the AP orbs, and hope that they don’t steal them back, leading to a rubber-band effect that meant a considerable amount of Overtimes. Combine that with basic combos that lent more to action games like God of War, and the entire system felt too complex to be approachable to a wider audience. It was too technical for the kids, but didn’t provide enough depth for fans of more prominent PSN fighters like Street Fighter IV or Blazblue.

But the clearest explanation would be the roster. This is a Nintendo game and Smash Brothers bleeds it. In a cruder way of saying, Smash Brothers has nostalgia in its guts. It embraces its history to an almost fetishistic degree, citing tremendously old, long-since retired franchises like Ice Climber and Earthbound (don’t even get me started on Mr. Game and Watch). But the more successful franchises like Mario, Pokemon and Zelda, series that still have relevance in the market, are represented just as well, if not better. This reverence is equally apparent in the stages. Melee’s Super Mario Bros. 2 throwback with its pixelated flying birds and the traffic in the homey town of Earthbound’s Onett are all bathed in nostalgia. A venerable Nintendo fan will grin that their favorite series is in the game. The similar games? Not so much. TMNT: Smash-Up doesn’t have much appeal even to established fans of Teenage Mutant Ninja Turtles, the handheld Jump Ultimate Stars will only appeal to manga fans in Japan (or to those who own an imported copy) and Onimusha fans will likely not give Blade Warriors a chance due to its silliness. Playstation All-Stars Battle Royale might have a slight advantage, but its obsession with the more contemporary Playstation franchises like Uncharted, God of War and Heavenly Sword combined with its abundance of third-party characters that do nothing to represent the Playstation brand make its nostalgia appeal much less prominent. Smash Brothers is a series that manages to respect the old dogs, while still giving them enough upgrades to be worth looking into even decades after their inception.

In a way, you could say that Super Smash Bros. has always used nostalgia as its appeal. It capitalizes on Nintendo’s own massive history and uses its past mythologies over the newer ideas. But that’s not a bad thing. In fact, it’s given Super Smash Bros. a considerable edge over anything that has challenged it, even if the challenger is better in one way or another. After getting hooked on playing as your favorite Nintendo character, the game’s intricacies follow suit and it no longer feels like a simple distraction. Combat depth and further reverence toward its franchises has given Nintendo something very unique in its library of game series. It’s been challenged time and again by game after game, each one trying to marry its source material with accessible fighting game mechanics. But at the end of the day, that’s Nintendo’s formula and the ones who have perfected that formula better than anyone else are Nintendo. Super Smash Brothers’ throne has been repeatedly contested, but never usurped, and when it comes right down to it, we really wouldn’t have it any other way.