As a frequent Vita importer, there is nothing more annoying than out of region DLC. Since the Vita doesn’t support multiple accounts, you can’t simply download the DLC and get the most of your game. This can be especially frustrating when the DLC is part of the patch (so you’re losing space for it) and you need a free download to access it, which was the case for Soul Sacrifice. Thankfully, the latest God Eater 2 patch adds five new missions, two costumes per gender and also fixes a number of things. 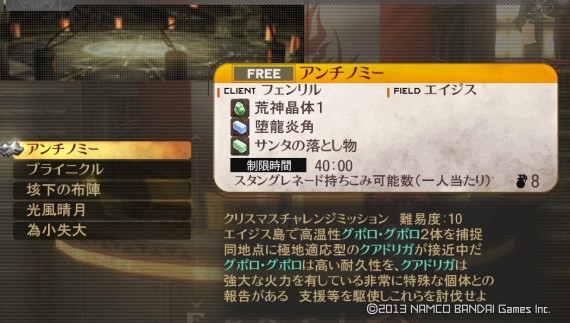 The five new missions are unranked, though they’re believed to be rank 10. Each mission gives a new material for completing and that is required to make one of the Christmas outfits. The material needed for the other costume will require some extra work, but is worth it if you want a more friendly Santa outfit.

While none of the missions add anything big, it’s great to get them as part of the patch. Hopefully this means we will see the rumored story missions added the same way, so importers can fully experience the story or at least have more levels to complete.