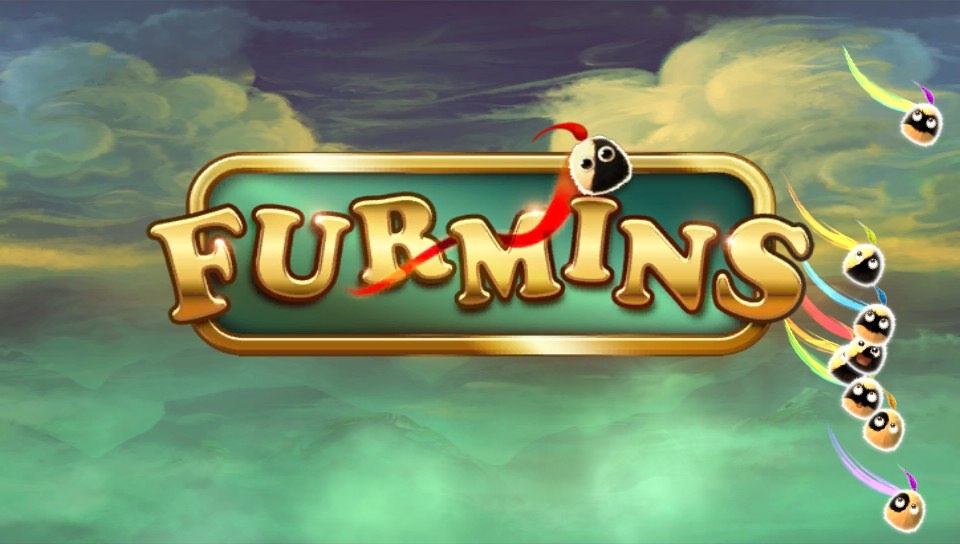 Housemarque made their name with the Super Stardust games, and have been in the news recently thanks to Resogun being the PS4’s killer app. Less than a month after that, they’re back on the Vita with Furmins — an iOS port that takes the game from Apple’s devices and plops it onto the Vita. Since it could be a touch-only affair, it’s a bit odd to not have it as a PS Mobile game, but that would take away the button controls for menus which do come in somewhat handy.

Your goal is to take a group of Furmins from the start to the bird-birched ending area. This may sound a bit like Lemmings, but this has less instant gratification due to its structure. Before hitting the Play button, you’ll move pieces around the level to properly move the Furmins where they need to go. At a minimum, you need to craft a path for them that will get them to the goal. Ideally, you want to also collect candy pieces scattered about in order to increase your score, get more stars, and unlock another set of stages hidden behind a star count. 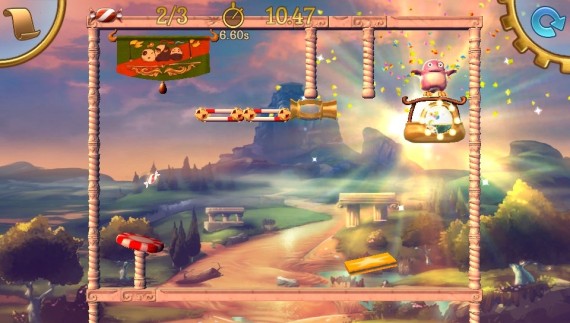 Trial and error is the name of the game here, as you can run through an idea in your head only to see it fail miserably in execution. New items and objects are introduced with mere text – you aren’t shown how they work, so you need to make educated guesses beforehand. Or you can simply press Play, watch how the Furmins fall and react to things without your meddling, and then move each piece around in the world to see what works and what doesn’t. Unlike a lot of puzzle games, the pieces don’t reset, so you’re free to tinker with just one piece if it’s causing you problems, or you can move everything around and hope to make great strides – and then have a chuckle when that winds up failing even worse than before. In theory, this would seem to result in Homer Simpson-esque rage towards an imaginary BBQ pit, but in execution, it’s fairly enjoyable.

While you’ll fail a lot, knowing that you can make incremental changes to each piece means that the levels never feel too daunting. It seems like you’re always just one small change away from a solution, and even when that doesn’t wind up being the case, you never want to rage quit. The best thing to do is just take a small break and collect your thoughts. The reactions of things like conveyer belts and ice cubes can be unpredictable to some degree until you’ve spent a set of levels with them to get used to their intricacies. Unlike a lot of physics puzzlers, it’s a user-friendly experience that eases you into things while still providing a healthy challenge.

The touch-heavy controls work perfectly, as one would expect from an iOS port. The graphics are very bright with a lot of color splashed on-screen. Foreground objects tend to be more solid colors, while the backgrounds feature more lush ones. It may seem odd, but in execution, it makes the foreground objects much easier to see and prevents them from blending into the background. Small touches like wind gusts and ice melting look fine, and the graphics are quite pleasing. The soundtrack varies between upbeat and upbeat and relaxing. There’s a bit of a soothing dentist office vibe to the tunes, which may not be the most complimentary thing, but does seem to suit what you’ll hear. None of the music is amazing, but it’s all just fine to listen to while playing the game. 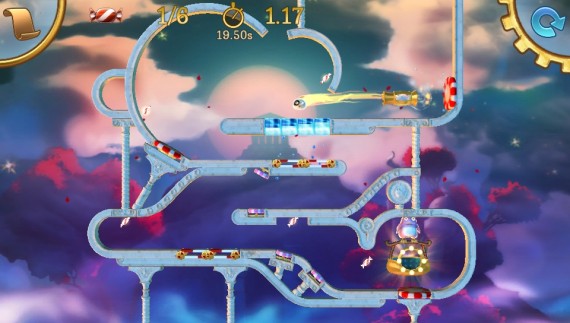 With dozens of levels to try out and a lot of replay value thanks to the three-starred system, Furmins is an easy recommendation if you grew up loving Lemmings or the Incredible Machines (or if you just dig a good physics puzzler). Since it eases you into the mechanics through easy-to-follow trial and error, it makes a great gateway game if the genre has previously come off as too intimidating. The bright colors and cheery vibe to it make it a perfect buy for kids with a love for physics as well. These kinds of games work well at introducing kids to physics, and I can see teachers using it as a way to break the ice on a subject that some may find boring.