Of all the various genres of video games, role playing games are probably the one that typically has the most amount of the focus put on story and dialogue. Sure, RPGs are also characterized by combat that requires an element of strategy, character progression, and a running time much longer than other genres, but story is almost always a major component. The stated goal of Questrun is to distill the role playing game down to nothing other than strategic combat, removing any element of narrative, exploration, or long term commitment. 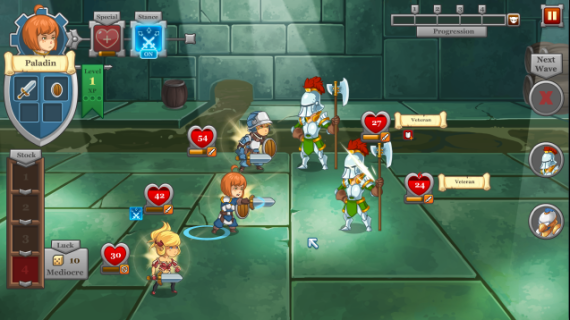 Questrun has several different missions that you can choose from, with more opening up as you complete them. Missions vary in length and difficulty, but always have you controlling three characters in a series of battles which increase in difficulty. The game goes for a pseudo-turned based system, but it’s not really a turned based game. Combat works on a cooldown system, much like the active time battle systems of classic RPGs such as Final Fantasty VI and Chrono Trigger. Where the combat differs from those games however, is its much faster pace.

The biggest defining factor of the combat in Questrun is that both your characters and the enemies attack automatically when their cooldown meter runs out. Each character has only their basic attack and a special move which operates on its own meter. Characters will attack the enemy directly across from them with their basic attack without any input from you. Your only real options in battle are changing positioning, using items, and using special abilities. The result is a combat system that has some room for strategy, but doesn’t come off feeling overly complex. Unfortunately, the fact that combat is constantly moving means you don’t really have time to analyze the enemies or develop any sort of in-depth strategy.

A core component of pretty much any game being billed as an RPG is an element of character progression, and while Questrun does have leveling and loot, it has no degree of permanence. The game doesn’t feature any named characters, only classes, and these characters have no permanent stats. Every time you start a mission each of your three characters starts at level 1 with their base weapons and attributes. The characters level up as you win battles during the mission, but none of that progress carries over once the mission is completed. While this does mean each mission has a clear difficulty curve as it progresses, the lack of any sort of permanence makes your accomplishments feel less significant. You can buy new character classes and some cursory upgrades in the store between mission which are persistent, but they only apply to certain types of missions, which sort of defeats the purpose. 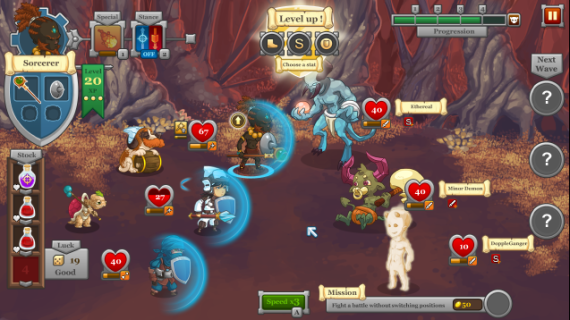 The lack of any sort of permanent character progression wouldn’t be a huge issue if not for the fact that the game is actually quite difficult. As soon as all three characters go down, you fail the mission and have to start it over completely. The most frustrating aspect of the difficulty is that it doesn’t seem consistent or fair. The game has a fair degree of randomness, which results in failure not always feeling warranted. Enemy makeup, item drops, and even point distribution upon level up are all entirely random, so often unlucky occurrences can entirely ruin your chances in a given mission. A particularly puzzling design element is the fact that you can’t even choose which characters you want to use, instead being given a random selection of three with the option to spend 10 gold to re-roll your party. You can re-roll as many times as you want, but it does add up quickly if you’re looking for a specific set of classes. Later in the game you unlock the ability to choose, but the lack of ability to do so early on is nothing more than unnecessary annoyance.

In a lot of ways, Questrun seems like a game that should be on a phone or tablet rather than a PC. The game can be played entirely with the mouse, there is no demand for precision in terms of controls, and it has nice looking hand drawn art that would be right at home on a small screen. Additionally, the focus on fairly quick missions over long drawn out sequences would make Questrun a great fit for mobile devices. The problem here is that the game isn’t on any mobile devices, at least at this point. 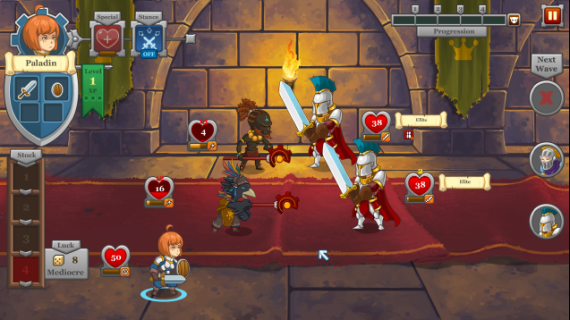 When a game’s stated goal is to distill role playing games down to nothing but combat, the combat needs to be really exceptional to carry the whole game by itself, and this is where QuestRun comes up short. The combat has its charm and even flashes of brilliance, but the strict adherence to a blistering pace really limits the player’s ability to strategize. Additionally, a lack of any sort of permanent character progression and a frustrating element of randomness means you have no other option than to keep trying and failing the same missions over and over again. The game has nice looking visuals and a pretty good soundtrack, but ultimately feels like something better suited to mobile gaming, considering there are much better options for strategic combat on PC. The game is available now on Desura and is also up for vote on Steam Greenlight.