A little surprise has quietly crept up at the official Nintendo site, where the upcoming release schedule shows Inazuma Eleven planned for a Q1 2014 release on the Nintendo 3DS.

A popular (and downright crazy!) soccer anime franchise in Japan, the video game treatment is handled by Level-5 (Dark Cloud, Dragon Quest VIII, White Knight Chronicles, and more recently Ni no Kuni). Level-5 has crafted a unique soccer RPG franchise out of it, which has been well received in Europe (where the sport is actually popular). Now in a rare turn of events, North American audiences seem to be in store for the fun.

While it is not clear which of the Inazuma Eleven games is being released (chances are it may be Inazuma Eleven 3, which was released for 3DS in Europe last year). Fans of Inzamua Eleven (and soccer?) in North America have a cool little sports RPG to look forward to. 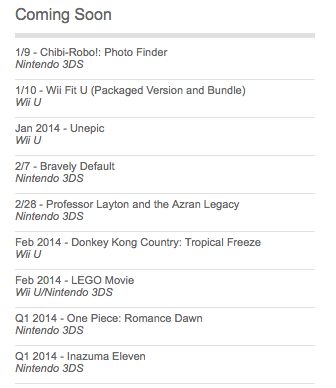