The Viking-inspired world of The Banner Saga is in something of a bad way. The Gods are dead, but that’s old news. More pertinent is the fact that the sun has inexplicably stopped, trapping the land in a cold, endless twilight. A caravan of Varl – giant men with horns sprouting from their skulls – sets out for their homeland of Grofheim with Ludin, the Prince of Men, in tow. It’s hoped that he will help to shore up the fragile alliance between the races, but only days into their journey they find themselves beset by the Dredge – an ancient and powerful enemy long thought extinct. The heir to the Varl throne is killed in the opening skirmish, leaving an uncertain army under the command of Hakon, his right-hand man.

Across the continent, a mass of Dredge sweeps southward, destroying everything in its wake. This includes the small village of Skogr, which finds itself besieged by an army of evil colossi decked in black armor. With their chieftain dead and their prospects looking grimmer by the minute, Rook, the town huntsman, leads his clan west and away from the encroaching horde. His only aim is to help his clan survive, but his decisions could very well shape the fate of their world, even as it ends around them. 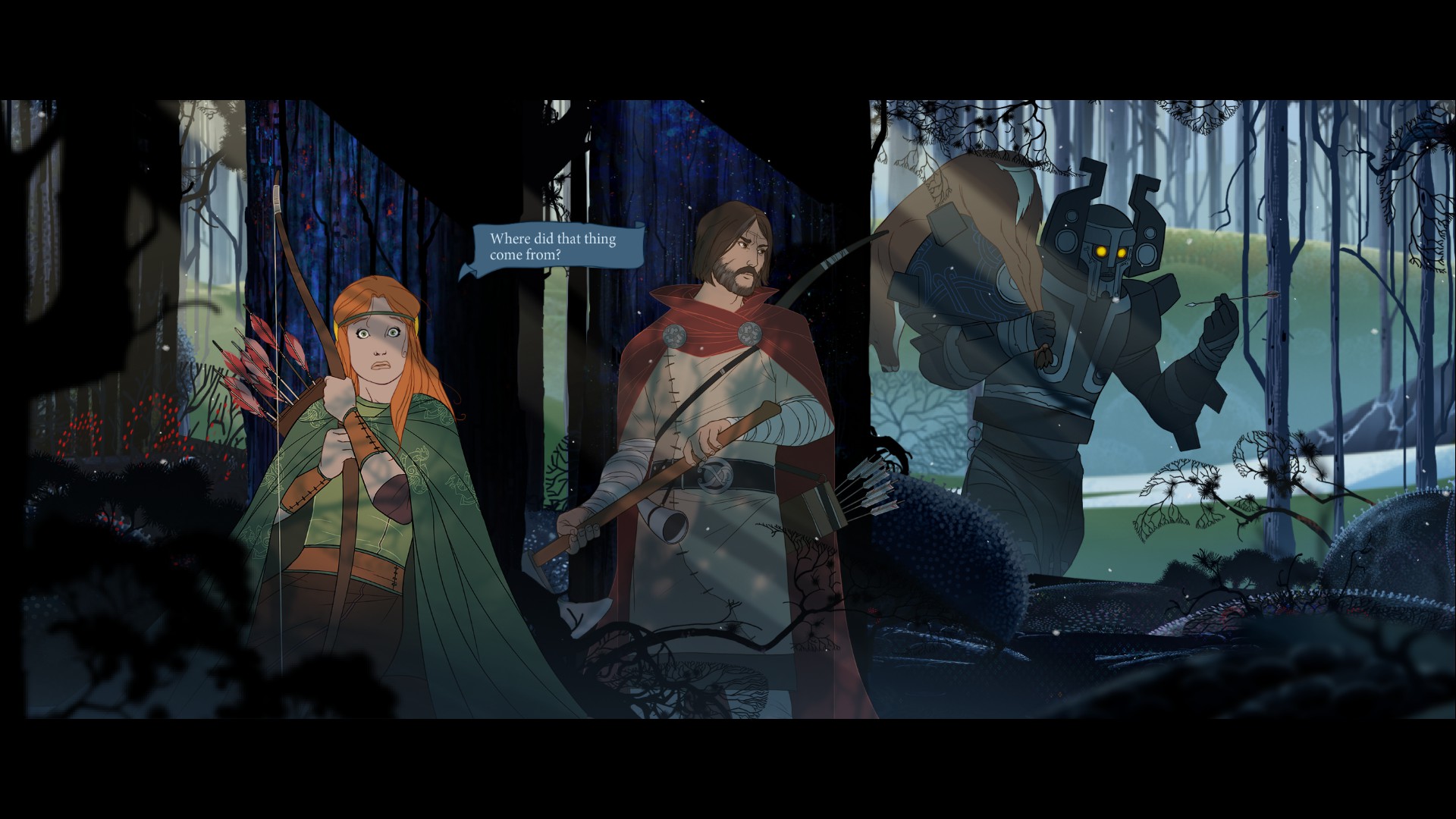 It’s interesting to see the Bioware formula applied to this brand of epic, world-spanning fantasy. You’re still confronted with ethical conundrums, but instead of making decisions for a single, player-created character, your perspective is constantly shifting between heroes. Similar to Game of Thrones or Fire Emblem, this approach gives you a broader perspective on the conflict and the politics surrounding it, as well as a greater sense of the characters involved. It also allows the story to flow more smoothly, instead of contriving reasons for a single person to be present at every world-shaping event in history.

All of it is presented beautifully, with a sweeping orchestral score composed by Austin Wintory (the genius behind Journey’s soundtrack, which should tell you everything you need to know), and an art style reminiscent of the golden age of animation. The game makes heavy use of rotoscoping, especially for its battle animations. As a result, despite all the effort made to avoid fantasy clichés, I find myself heavily reminded of the animated Lord of the Rings Films. Animation elsewhere is fairly sparse – most cutscenes just involve characters standing around talking as the wind occasionally rustles their clothing – but the character portraits are so detailed that it hardly matters. Likewise, the world that surrounds them is breathtaking, styled after the backgrounds of Sleeping Beauty, and divided into myriad parallax layers that give a sense of depth. 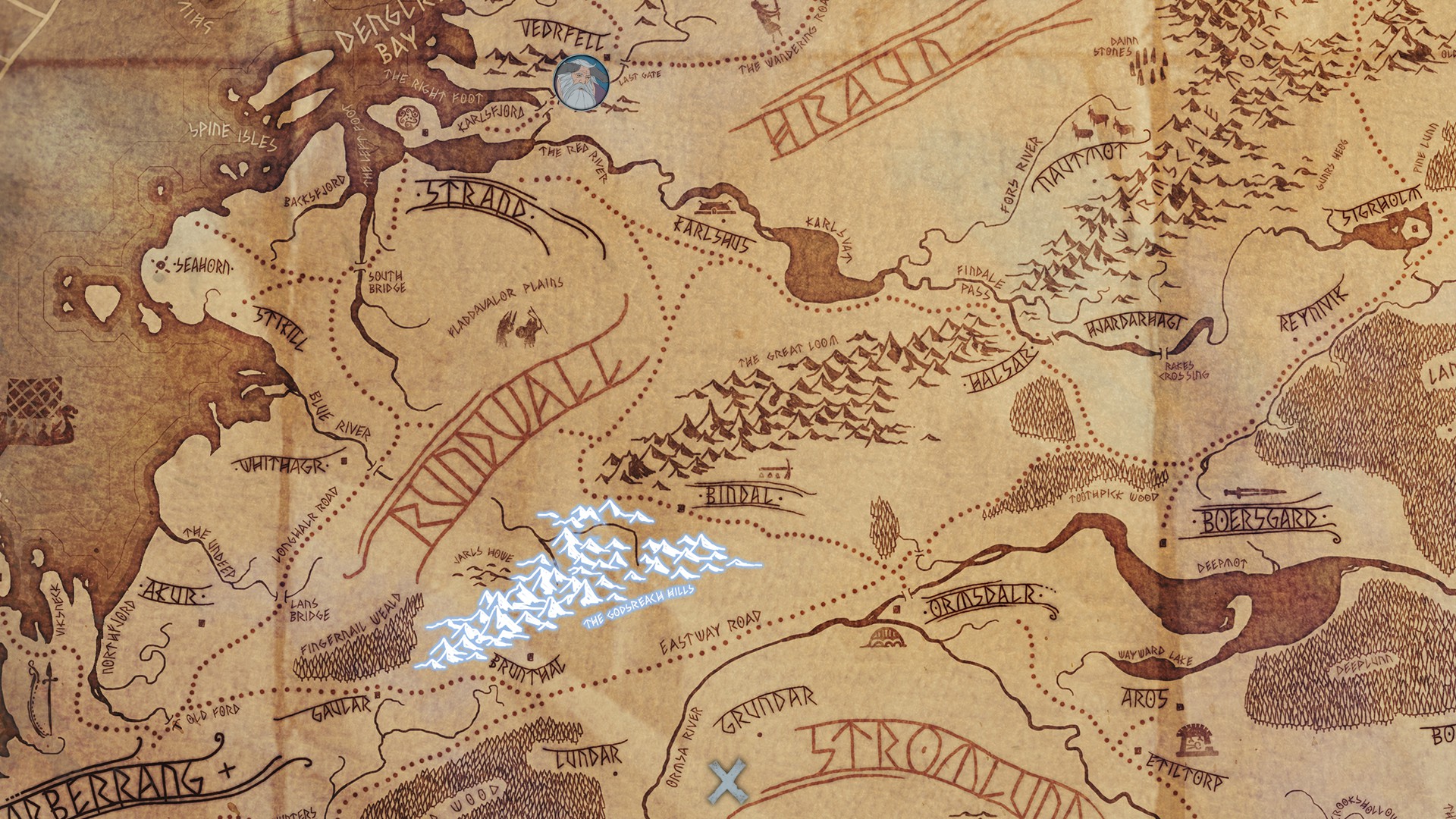 That depth isn’t just a sense, however. Stoic have written up a staggering quantity of lore to bring the game world to life. Men and Varl have a long and complicated history of wars and alliances, as well as many little details that define their races. Though the gods are mostly based on Kickstarter backers, they’re integrated into the story well enough that you can’t tell which. Additionally, every place in the world has its own name and bit of backstory, which you can read by selecting it on the world map.

There are a lot of “verbs” at play in the design of this game, but at its heart are choice and consequence. In most games, these apply only in terms of dialogue choices, but in The Banner Saga choice permeates all aspects of play. Here the game begins to resemble The Oregon Trail. Throughout your adventure, you’ll find yourself leading huge caravans on massive treks with very limited supplies. Days have lost all meaning, save that they measure roughly how far you’ve gone and how much you have left. Every stop you make to rest, recover, and raise your party’s spirits is a day’s worth of food you don’t have to feed the hungry families that follow you. You’ll frequently be asked to make tough decisions as you travel, like whether to add refugees to your party (knowing they’ll mean more mouths to feed), or whether to steal livestock from a farm. Some of these decisions can even permanently kill your party members. 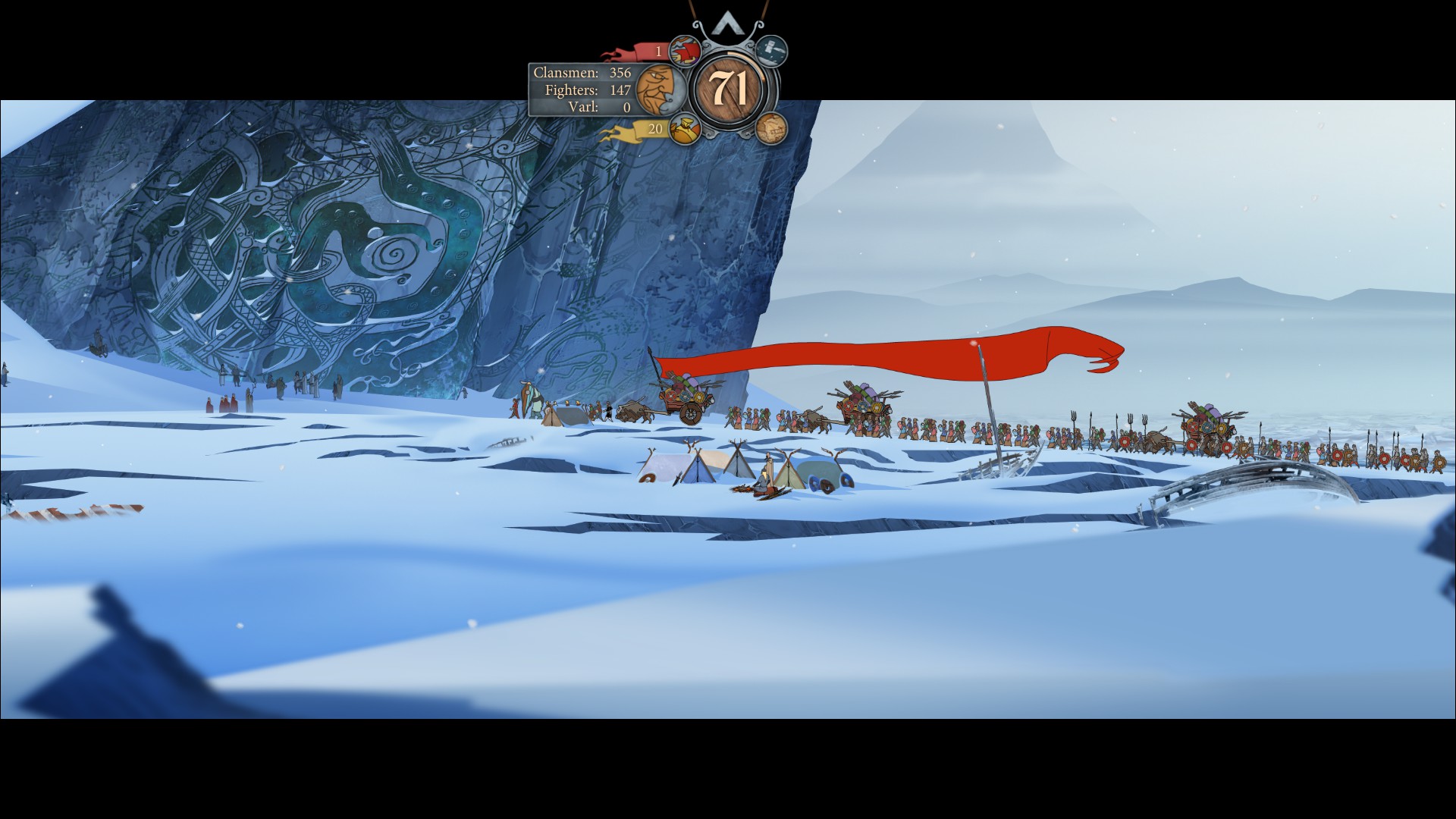 On their own, these are interesting enough quandaries, but they become truly compelling as they feed into the game’s combat. If morale is low around camp, your party will go into battle with lowered willpower, a resource that lets you use special abilities and make extra moves in combat. If your characters are knocked out in battle, and you don’t give them time to rest, they’ll enter the fray with reduced strength, which measures both their health and how much damage they can mete out. You need supplies to replenish these stats (or at least to do so without letting members of your caravan starve to death), but they will cost you in “renown,” a currency that you also need to level-up your party.

Things become even more complicated in “wars,” which pit the population of your caravan against hordes of Dredge. If you’re outnumbered, or your morale is low, you can expect your forces to fight poorly and take heavy losses. On top of that, your party will often have to fight on the front lines, and the battles you face will be that much harder if your soldiers can’t pick up the slack. Altogether this creates a real sense of “momentum” both for and against you – when you’re doing well, you’ll win battle after battle, but if the tide of war turns, you’ll have a hard time stopping it. The game does a good job of making you feel desperate when things are bad, but fortunately (or unfortunately, depending on how you look at it) loss is not the end. Instead you continue onward, usually heavily injured, and sometimes with heroes dead, forging ahead on a story that is uniquely your own (at least, that’s the sales pitch). 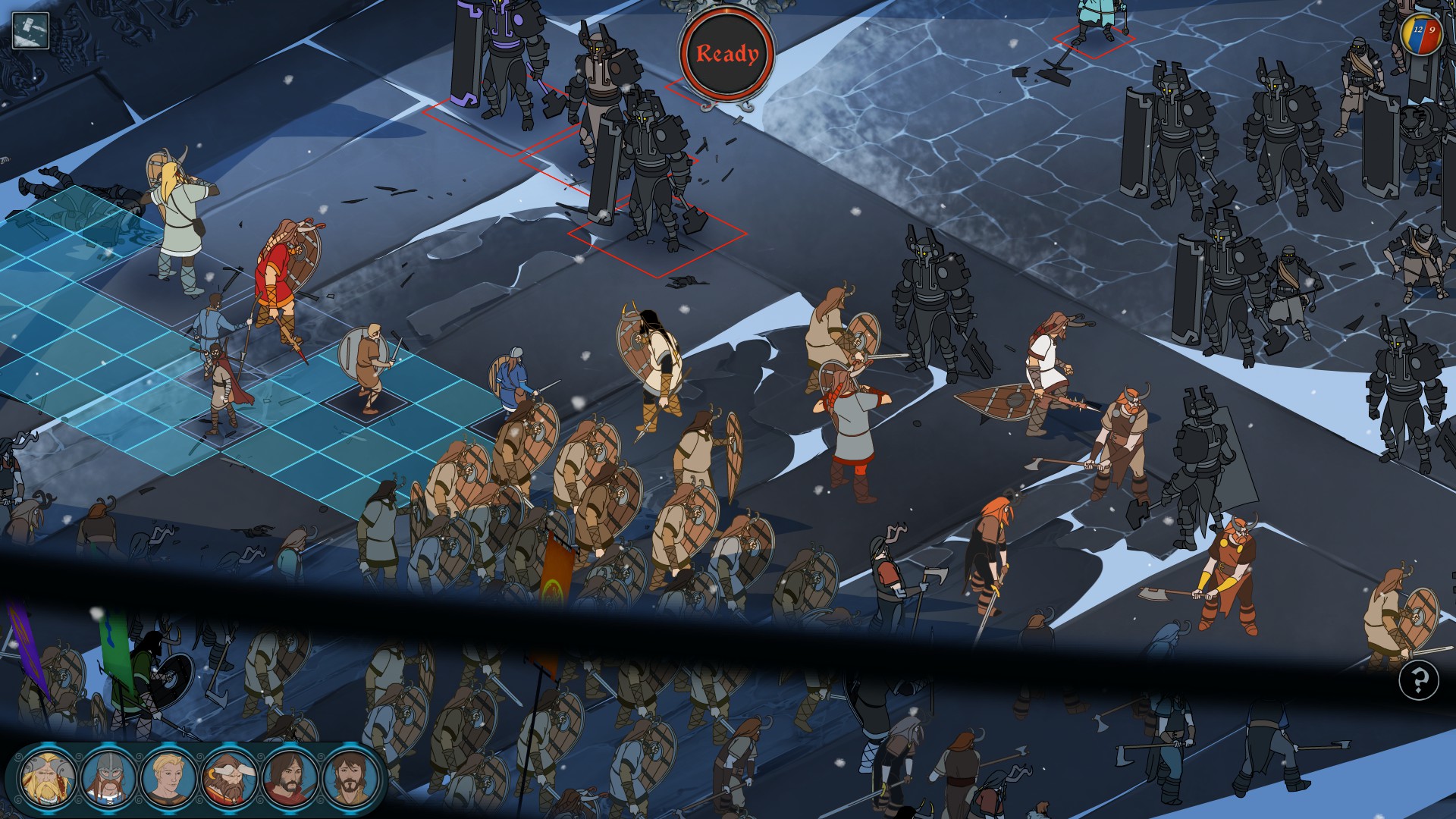 Combat itself is deep and engaging. You pick a party of six heroes from a larger roster, decide the order you want them to move in, and place them on the square grid battlefields as you see fit. From there, you’ll take turns positioning yourself and striking at the enemy, trying to whittle away at their strength and armor before they can do the same to you. Turns always alternate between you and the enemy forces, meaning that the individuals on whichever side is outnumbered are able to take more actions per round (until only one remains, at which point it’s essentially open season). Coupled with the fact that attack strength is directly tied to health, this creates a more interesting dynamic than the standard “hit each enemy in turn until they’re all dead” strategy typically seen in these sorts of games. That’s still perfectly viable, but there’s equal benefit in whittling down a number of enemies at once so that they waste turns without doing any real damage. 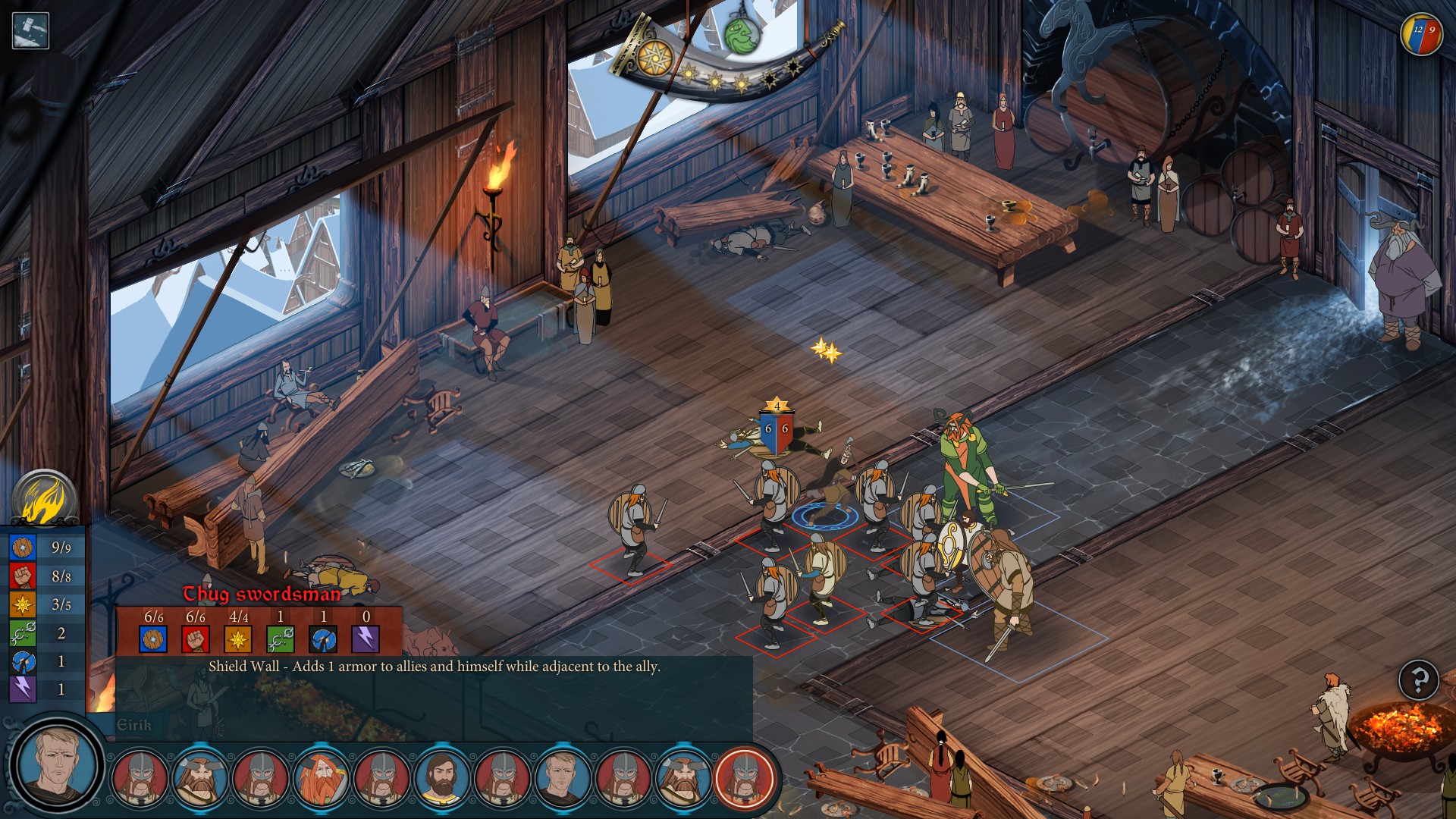 Your choice of heroes has an immense impact on how battles play out. With differing stats, there are obvious variations in defensive and offensive capabilities, as well as support, but that’s just the beginning. Some characters come bearing sword and shield, while others have ranged weapons like spears and bows. Varl take up 4 tiles instead of just the one, so they can be used to block the paths of enemies, although it’s likewise easier for them to become trapped. On top of that, each character has their own class ability fueled by willpower – some can push enemies around, while others can bait them into wasting their turns, or trap tiles so that they can’t advance. Some abilities, like magic, can hit multiple enemies at the same time, although it’s possible to blast your own units with heavy collateral damage in the process.

Combat can be a little frustrating, truth be told. There’s no way to change turn order once you’ve seen the battlefield (outside of one character’s special ability). This means you need to reload your last save if you want to change your approach, which fundamentally undermines the core concept of living with consequences. The lineup of enemies is rebalanced depending on which heroes you select, but not on the order they’re in, so it’s usually not possible to change your party in order to exploit their weaknesses. The way turns are set up can also make it impossible to save individual units if they come under heavy threat. Still, all this can be worked around if you play carefully. 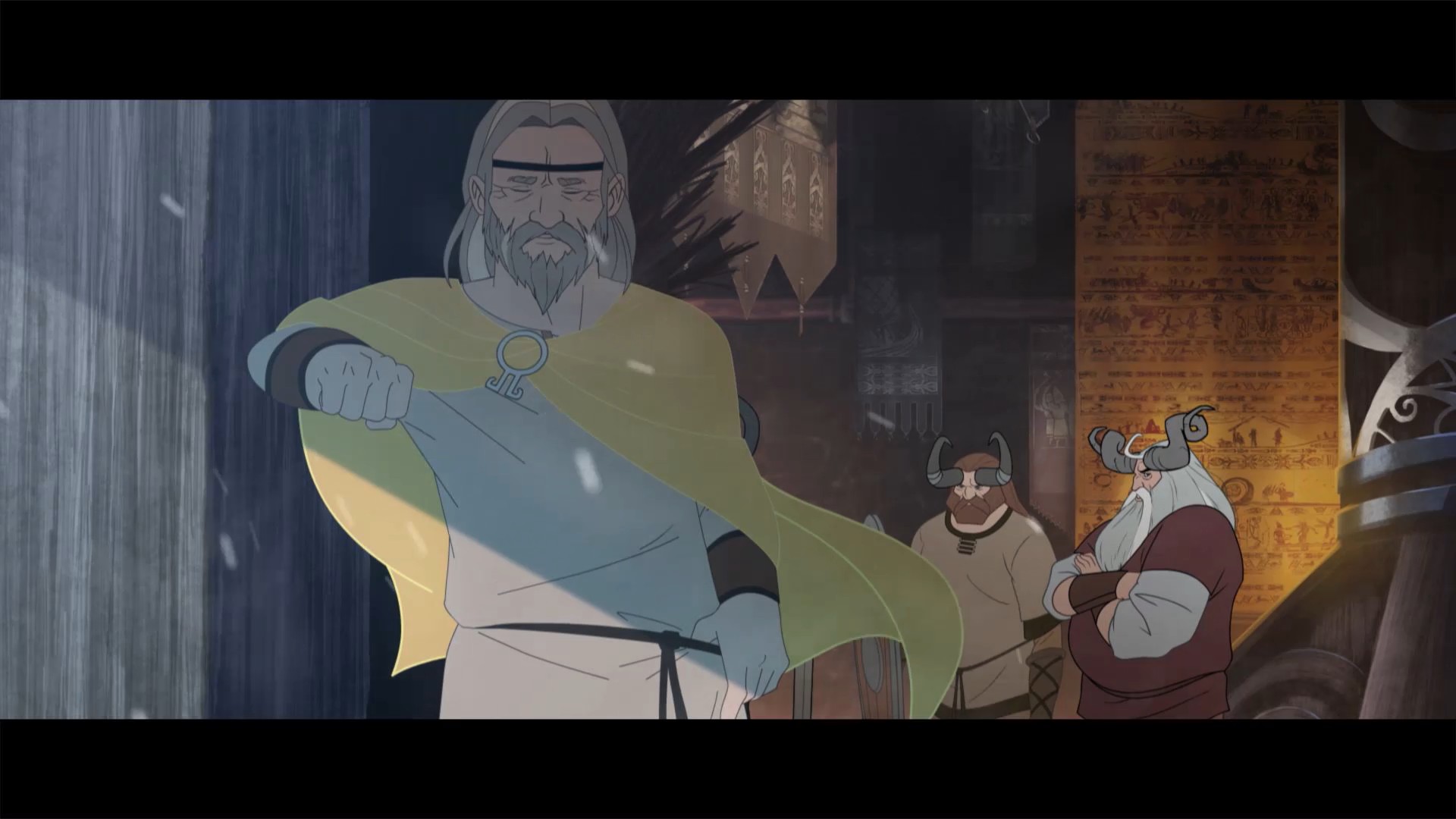 An original work of epic fantasy in the truest sense of the term, The Banner Saga can only be called a triumph. Feature-quality production values make the world come alive, while weighty choices and deep combat with a real sense of consequence make for a story that feels both personalized and dramatically satisfying. If you’re getting tired of swords and sorcery, or just looking for meaty tactical battles, few RPGs will satisfy you better.