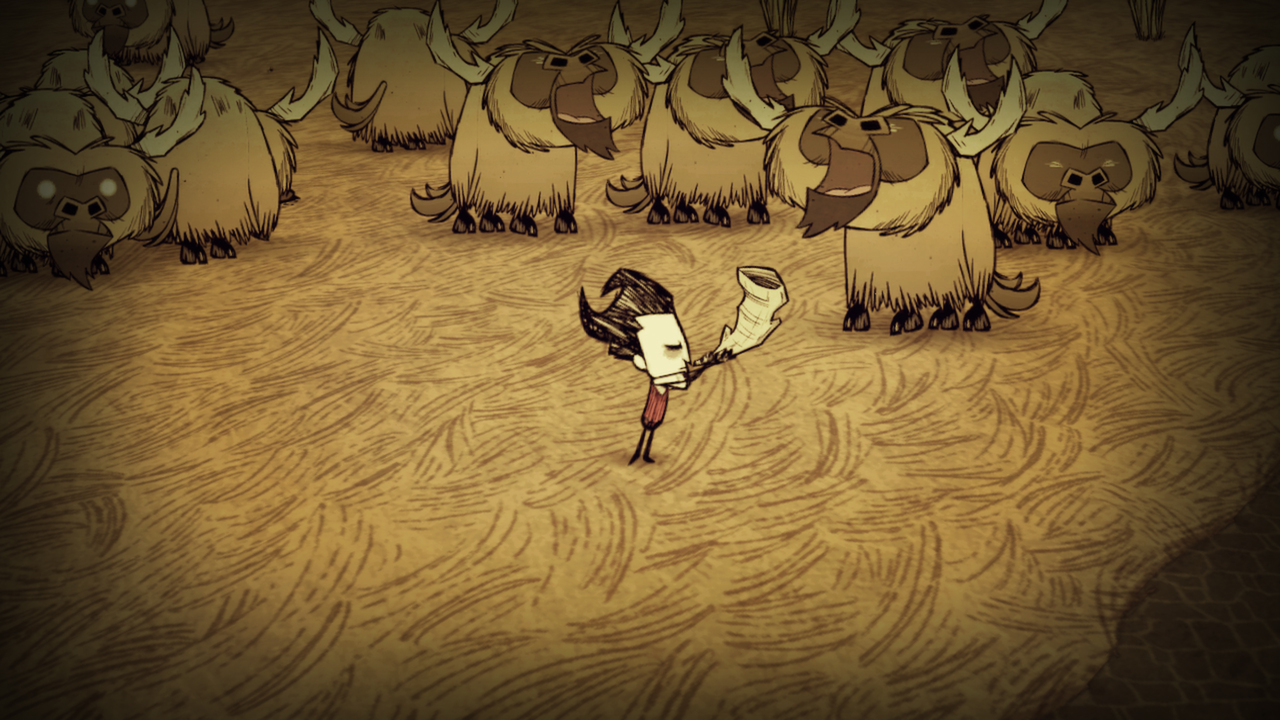 It’s a lovely day to go for a walk through the forest. The dark night has given way to a clear morning and I’ve been toiling over the fire to cook up food and spending a little time with the alchemy engine to get a shopping list of parts, because keeping busy is a good way to preserve sanity while waiting for the dawn to come. Charcoal for a boomerang, spider web for a bug net, spider organs and ash for healing salve, and general scavenging to keep food supplies from draining too low will fill up the new day nicely.

A quick stroll north, carefully circumventing the robots patrolling an area I don’t have weapons strong enough to survive venturing into yet, and I find the skeletal corpse of an adventurer who died with his boomerang, which is not only a very helpful item but also frees up the resources I’d already gathered for other things. I’ve never gotten to use a boomerang before, though, so the first thing to do is find something to chuck it at. Tossing it at a crow nets a black feather, useful in a crafting recipe for… something. I’ll look it up when I get back to camp. Unfortunately it also comes back and smacks me in the face, knocking my health down to just above nothing. That didn’t go well but practice makes perfect, and it seems like a nicely powerful weapon so obviously the smart thing to do is use it again as quickly as possible. Turns out practice makes dead, and I’m all out of sacrificial altars for revival. The unforgiving lands of Don’t Starve have killed me again, but next time will go better. Probably.

Don’t Starve originally came out on PC and created a solid fan-base for itself by being a really fun survival/crafting game with a humorous gothic-lite style. It kept interest up by being constantly updated with new features and plenty of secrets, growing from its initial impressive size to a huge epic of carving out a life in a hostile land, if only you can manage to avoid the many endless ways death can cut the adventure short. There’s lands to explore, a giant network of caves underground, monsters of all shapes and sizes, tons of resources if only you can figure out how to both collect use them best, and, if you can find it, an Adventure mode to provide a bit of plot to counterbalance the free-form Survival mode. Don’t Starve is loaded with content, but it requires a motivated player to get to it.

The main issue many might have with Don’t Starve it that you need to make your own goals. There’s no “go here do this” to the game, nothing pointing you in the right direction. You get resources by harvesting them from the world, craft them into items, use them to harvest more resources that then get turned into new items to help you live longer. You need to keep on top of health, hunger, and sanity, and there’s no instructions on how to do this outside of the obvious “eat food” and “don’t get hit”. Everything else is trial and error or a quick trip to an FAQ.

After a few games and a few deaths, however, the pace of play picks up because experience is at work teaching you what to do. Gather resources like flowers, grass, twigs, rocks, berries, and carrots as quick as possible. Craft flint and twigs into an axe and harvest trees. Plant the pine cones to replenish the tree supply and combine the wood and some rocks into a fire pit, which will eventually be the centerpiece of home base. Spend every second of the first few days putting that base together and then start budgeting time between resource gathering and exploring the wide-open world. While that sounds a lot like work it’s actually a rewarding kind of fun, once you get the taste for it.

The work of survival can be a bit grinding at times, but there’s a satisfaction to be had from making a plan and seeing it through. Today I have food but want to build something, so it’s off to harvest logs and craft them into boards. Trees are cheap, plentiful, and easily renewable, but tomorrow I want gold and finding veined rocks isn’t so simple. Loading up on roasted carrots and berries and taking the trusty pickaxe out for a stroll into the stony wastes solves this problem, but there’s frequently other things to find there as well, such as a jagged pile of rocks that signifies a cave entrance. That’s an adventure for another day, though, because the gold I’m bringing home will make an alchemy engine, which in turn allows the creation of much better gear that increases the odds of crawling out of the cave alive. The cycle of work/reward turns at a pleasant pace, making the results of all that effort feel like something earned.

And then you get cocky and decide to attack the wrong monster. Or an unexpected swarm of bats invades the camp, or a surprise tentacle in the swamp, or maybe you weren’t quite so prepared for winter as you thought you were. Death isn’t truly inevitable, but it’s going to take a whole lot of dying to learn how not to do it any more. Then it’s time to choose who you want to play as this time, roll up a new world, and start all over again with, hopefully, a better plan.

Nice as that is, the depth of play wouldn’t mean much if the transition to console hadn’t been smooth, but Don’t Starve has made the change with perfect grace. The two games are nearly identical except for control method, and after a few minutes the switch from mouse and keyboard to controller is almost completely forgotten. Sorting inventory or crafting is simple, and clever use of the plus pad gives you multiple context-sensitive actions per item. You can change inventory on the fly with the right stick, or pause and take your time with the R2 button. There’s no pause for crafting, though, and it’s easy to waste a night weighing options, planning the resource-hunt for the next big project. Then again, nights are dark, deadly, and draining on sanity, so what else were you going to do with them?

Don’t Starve is a fantastic, huge, deadly ball of entertainingly gothic survival. It requires a self-motivated player to get the most from it, but once you start to learn its systems, each game lasts a bit longer than the previous one, and the ability to experience more of the world reveals more secrets and avenues of exploration. Restarting from scratch after each death is tough, but each new play-through gets a bit more efficient, until systems that were taking a week to access in earlier attempts become just another goal to clear on day 2. The initial startup may be work, but the fun of exploration beckons once you’ve earned a spot in the world, and it feels like a privilege that’s been earned. Even though that privilege is sure to eventually end in an inglorious death, it’s impossible not to look a little farther and experiment a little more. The world may be strange and dangerous, but with a little luck and a whole lot of experience, you might be able to tame it, eventually.