The original Muramasa was one of the Wii’s most impressive games. Its stunning visuals and unique art style mixed platforming and brawling fairly well — but with a few control hiccups. Fans hoped to see it remade on stronger hardware and they did when Rebirth hit the market last year and brought with it a new platform (PS Vita) for the game to shine, enhanced graphics and improved controls by revamping the layout. Another big reason to buy it was the promise of DLC. Fans were initially skeptical about this since it wasn’t done on the Wii, and it could easily come off as phoned in. Fortunately, that’s not the case with the first piece of DLC.

Fishy Tales of the Nekomata features an entirely new character to play as, with her own story that it set apart from the main game. Okoi is out to avenge the death of her brother and uses her cat-like claws to do battle. While the game’s main story features two characters that can swap blades, she can swap forms at will. This results in her transforming into various cat-based entities to unleash hell upon ninjas – which is always a good time. These forms offer up some new ways to play the game compared to the main game’s regular cast.  The default form is just a calico cat who can slice fools up and blast them with energy, but if you store up your strength, you can become a giant cat head formed by tons of cats coming together (because video games!) and unleash holy hell. Each of these forms plays completely different, and unlike just swapping blades using Triangle in the base game, really does change how you play the game. 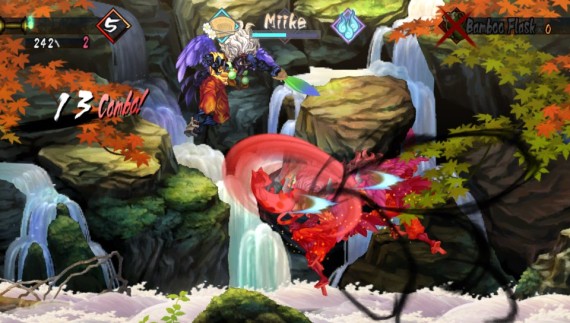 Her human form is very similar to the main game’s play style, while the cat form is super-fast and requires you to be more precise since the range is so much shorter and the character model is so small. The giant cat head feels like a reward since it’s so overpowered and yet you do have to be wise when using it since it’s a limited-time thing – it’d be like wasting an invincibility star on a single enemy in Super Mario Bros. While you could do that, it’s better to take out as many enemies as possible, or at least whittle them down to very little health whenever possible. Given how drastically different she plays from the main game’s cast, it’s easy to recommend getting this DLC just to check out how much Okoi’s various forms change up the gameplay. If you grew weary of it before, this could be just the thing to get you back into the game.

On the AV side, this DLC delivers the goods. You get more gorgeous art to look at with a ton of color popping off the screen. The screenshots here, taken with the Vita, don’t do the graphics justice since they’re so lossy — but you can still get a good idea for just how bright everything is. Environments are full of detail and every part of the world is bathed in color. After years of getting used to subdued Earth tones on consoles, seeing something with so much life to it is shocking — but it’s a pleasant surprise. The voice acting is in Japanese, but has plenty of passion behind it, and the subtitles seem translated about as well as they were in Rebirth, so everything’s easy to understand. The music is the same kind of feudal Japan-style that permeates the main game, and is very fun to listen to. 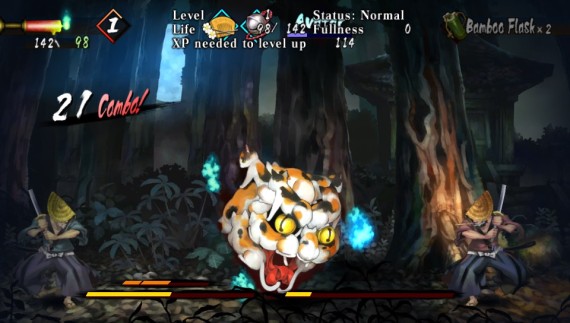 At $5, the first DLC offered up for Muramasa Rebirth is easy to recommend because of how drastically it changes the gameplay. If you thought the base game got old somewhat quickly due to the blades not offering up much variety, you’ll love the cat-based forms and the constant change in attack range. You’re forced to think on your feet in every battle and can’t slack off since the challenge is fairly high. Everything in it retains the original’s high production values, and while this side-story may only take a few hours to complete, it’s worth buying if you enjoyed the base game.