Being a grown man with the occasional laziness-beard makes it hard to game on the go. I’m not saying that it’s embarrassing, but pulling out a bright yellow Pikachu 3DS wouldn’t be very professional at the various grownup establishments I frequent. Thankfully, there are plenty of mobile games I can indulge in while standing in line at the local shelter, or “donating” some blood for cookies and juice. The only real problem is making the choice. After all, those 99 Cents were hard-earned, and gambling with games can be dangerous when the stakes are high. Fortunately for you cheapskates: I, the self-proclaimed mobile game guru of the gaming-sphere, will help you spend your “riches” wisely. In this weekly column, I will showcase outstanding mobile games in short, easy-to-read gatherings of words. You’re welcome.

Developed and brought to us by Glitch Games, the company responsible for the Forever Lost series, and some other pretty nifty adventure games. They’re a company that embraces bugs and glitches, if only to exploit their humor, and consists of two handsome men and what appears to be a robot. 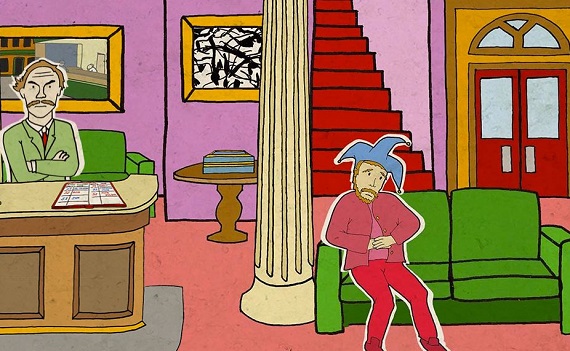 I know what you’re thinking, “who let the weird kid that eats paste do the artwork for a video game.” You’d be wrong to think that, though. Grown men made this. And it’s likely something of an homage to Camille Pissarro. Nevertheless, it’s an adventure game; something the fellas at Glitch Games have been tinkering with for quite some time now. They’ve had plenty of time to perfect the craft, adjust the gears and twist some knobs — after all, you don’t get over a million downloads by making terrible games. Well, you technically could with the right marketing, but that hardly counts as “success.” Financial success, sure, but where’s the integrity? Regardless, Ferris Mueller’s Day Off is a special dose of clever, and not just because it’s infested with 80’s pop culture references. It has class — and that’s not something you find in every app-market release.

Okay, that’s cool I guess, but I’m not convinced.

Ferris Mueller’s Day Off is a point-and-click adventure game with puzzles to solve, an inventory to manage and amusing references. Lots, and lots of amusing references. Sure, you may not always ‘get’ them, but that just means you need to visit Blockbuster — I mean, Redbox — and catch up on the classics. The puzzles, which comprise a good chunk of the gameplay, are as interesting as they are confusing. There are more than a few instances where the solution doesn’t seem to make much sense, but that didn’t bother me in the least. Puzzles don’t have to make sense. Honestly, where is the sense in spending hours putting a thousand pieces of a puppy in a teacup together? That’s what I thought.

The goal in the game, which is as silly as its art-style, is to find a sickly mule — a lot like what one would do during closing hours at the pub. It roughly follows the film which it draws its name from, and includes some smile worthy referential gags throughout. It’s simply a colorful game, in every sense of the term; from the bright drawings that look like reform school cafeteria doodles, to the campy storyline and puzzles — it’s a variable hodge-podge of classic adventure game mechanics and blatant silliness. 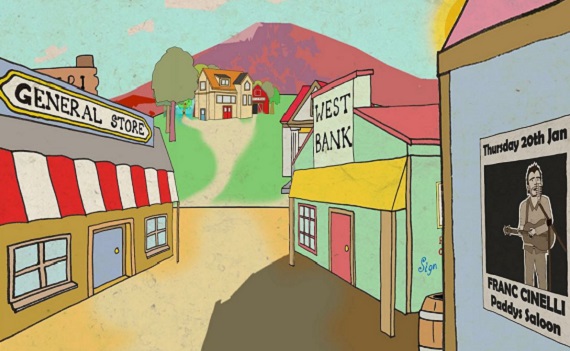 Sounds like my cup of tea. Is it worth it?

Value is subjective. Do you want to talk to silly people, solve quirky puzzles, chuckle at 80’s and 90’s movie references and play an oldschool point-and-click adventure game with nifty graphics on your smartphone? Good, because if you didn’t I’d be worried about you. Only crazies aren’t interested in such a glorious combination of features. Also, it’s worth noting that any game containing such an abundance of puns is worthy of a purchase, regardless of your feelings towards its genre. It’s like a law or something.

There’s a wonderful soundtrack for those with ears, as well, which greatly compliments the visuals. But perhaps most importantly, Ferris Mueller’s Day Off is really fun to play. That’s a no-brainer when it comes to video games, isn’t it? The point-and-click genre has always been a go-to for adventure fans on the go, and this is a well-crafted, hugely enjoyable and funny addition to the roster. There’s some confusion here and there, but also so much to love that at some point your fingers will start tapping the screen in some uncomfortably erotic ways. Don’t waste anymore time, all the humor and charm of Ferris Mueller’s Day Off can be yours for one simple payment of 99 cents.

You’ve just been schooled by the Mobile Patrol. For more great mobile game related news, features and reviews, check back on a weekly basis. There just might be some. Maybe. Sometimes. When there’s nothing more exciting to write about. You’re welcome.