Now that the PlayStation 4 has been out a few months, it seems Sony is finally releasing a quality headset to go along with it. The mysterious headset, known as the “Gold Wireless Headset”, has appeared on both Best Buy and Play-Asia and is looking to the the ultimate companion for PlayStation gamers. 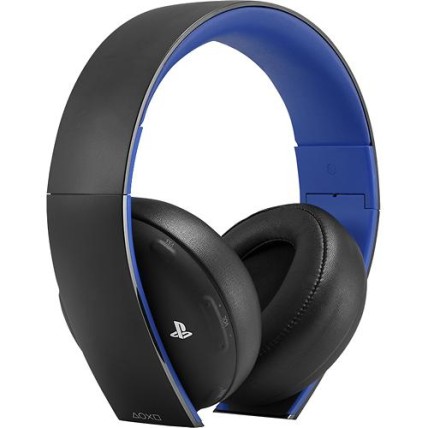 The headset, pictured above, looks to be a revision of the Sony Studio Headset done in a PlayStation 4 theme (black/blue). According to the listing, the headset works on the PlayStation 3 and 4 wirelessly, while also supporting the PlayStation Vita and other devices via 3.5 mm cord. As with previous models, the headset has a hidden noise canceling microphone and apparently supports 7.1 virtual surround sound. While none of this is out of the ordinary, the listing does have a rather interesting feature.

Developed by PlayStation: With the Headset Companion App, download custom game modes created exclusively for PlayStation® by developers that are specifically tuned to enhance the audio in your favorite games

Depending on how many developers support this, it could make the “Gold Wireless Headset” a no brainer for Sony faithful.

Currently Play-Asia is selling the headset for $129.99, which falls in line with previously released headsets. They also list it as a January release, though that is most likely just a place holder.

Check out other images of the headset below: