Supergiant Games is best known for Bastion, an insanely creative isometric RPG with layers, upon layers of imagination. It received plenty of awards, and each one well deserved. It would have been easy enough for the folks behind the hit to simply churn out a sequel, reuse some gorgeous artwork, and tweak the already excellent mechanics. And we would have been happy about it, as well, because it’s not everyday that a game like Bastion comes along. Instead, Supergiant decided to take the riskier route; the more inventive approach. Have you heard about Transistor? Of course you have, but just in case I’ll refresh your memory.

Transistor — followup to the indie sensation, Bastion — is a sci-fi themed action RPG with a thick coating of strategy. It’s about a young singer named Red, a mysterious weapon, and a strange narrator. Sure, a Bastion sequel would have been just dandy, but all it takes is a glance at the world of Transistor to realize that it’s a clear evolution of its predecessor. The cyberpunk backdrop, intricate design and astounding attention to detail is nothing short of stunning. While the surface is all we’ve managed to explore thus far, Greg Kasavin, Creative Director at Supergiant Games — as well as the key writer behind both Bastion and Transistor — has answered a few of our questions before returning to the lab.

[Hardcore Gamer] The artwork in Transistor is breathtaking — something of a living painting. Was there any particular sci-fi-themed inspiration behind the stylistic visuals?

[Greg Kasavin, Writer and Creative Director, Supergiant Games] One of the ideas that got us excited early on was making a game in an original science-fiction setting of some sort. We were particularly interested in the cyberpunk aesthetic as a starting point, with its massive futuristic cities and its grounding in contemporary times, as opposed to a distant future with spaceships and laser guns. At the same time we think cyberpunk has been done really well in a lot of movies and games so we wanted to find our own angle on it. Jen Zee our art director drew inspiration from the art nouveau movement from the turn of the 20th century, characterized by lots of gilded and natural patterns, as well as elongated and classical-looking forms. We were interested in combining these vintage types of elements with ideas for what a futuristic city could be like. We wanted to create a romanticized setting — classic rather than utopian.

That said, from an art standpoint Jen took inspiration from any number of sources ranging from games to classical artists so it’s hard to pin it down to any one thing. It took us a while to get to the look you see in the game, so it’s good to hear you like what you see of it! Our main goal there is to create a distinct-feeling sense of place with its own identity. 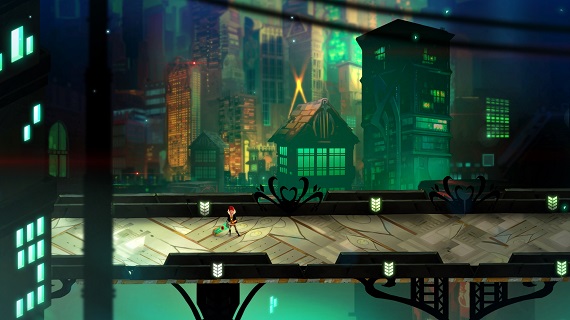 “We wanted to create a romanticized setting — classic rather than utopian.”

Bastion was a very theme-heavy game, and featured a fantastic story involving its world. Is this something we can expect to see in Transistor — and if so, is there anything you can tell us about the story?

Our first game Bastion is very much an expression of our values as a studio, as we really believe that games are capable of creating great stories through the play experience, and that games are capable of being much more than just fun to play. We couldn’t be happier with the response to Bastion’s story, and it’s fair to say that the story of Transistor is just as important this time around.

You play as this character called Red, who happens on this mysterious weapon of extraordinary power. Its former owners are desperate to retrieve it, so Red finds herself fighting across the city of Cloudbank in search of answers. That’s the basic setup! We like to throw players in at the deep end rather than giving a ton of plot and exposition up front, so that way you can just start playing and get into the game in a more natural way. You’ve then got a whole game ahead of you during which you’ll be able to piece everything together. You’ll notice immediately when you start playing that there’s a voice coming from the Transistor, this weapon Red is carrying around. We were interested in exploring the relationship between these two characters as part of the story. 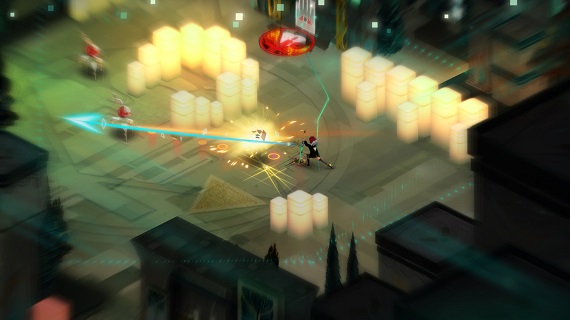 “Games are capable of being much more than just fun to play.”

After watching every bit of footage we could get our hands on, it’s evident that there’s a fair bit of interesting combat in the game. Will there be any new or surprising mechanics to tinker with as well?

One of our main goals for the moment-to-moment play experience of Transistor is to capture the thoughtfulness and drama of some of our favorite turn-based games but in an action-oriented context. So you can play Transistor similar to other action RPGs, but at the same time there’s this whole strategic planning mode layered into the action, which opens up a lot of possibilities from moment to moment, and should lead to a lot of exciting, unscripted battles. I think the balance between the real-time and quasi-turn-based aspects of the game is a big part of what makes it feel special.

“We wondered if we could make a whole new world and set of characters.”

Was Transistor something — or a part of something — you’ve always wanted to make, or did the idea spring in a brainstorming session?

Some of the ideas on Transistor date back to before Bastion was released, when we dared to start thinking about what if maybe we’ll survive our first game as a small independent studio, and be able to make another something else on our own terms. We loved making Bastion, and we want to be able to stick together as a team and keep doing whatever it is we’re doing for as long as we can. Having made Bastion, we wondered if we could make a whole new world and set of characters and play mechanics from scratch, and in a different direction from our first game. Some of the inspirations on this project go back way longer than that, though, and they’re personal to each of us.

At the same time, Transistor is the result of our iterative development process, as our ideas never start fully formed and always evolve in ways that surprise us. For example the initial idea for Bastion was just ‘an action RPG where you build the world around you’, and it evolved from there. Things like our use of narration weren’t there from the start. I think not getting too far ahead of ourselves in the early concept stage is important because so many aspects of a game come together in the feel of it. You just have to build it, listen to it, and keep pushing on what’s good about it while getting rid of what’s not good about it. So, we try to come up with a general set of ideas about the tone and play experience, then see where that leads us. We then start to see many long-standing personal influences naturally start to creep in. It’s been great having every member of the team that made Bastion together again on Transistor.

According to the man behind the answers, the team is pretty far along in development and Transistor should be releasing later this year. It will be available on the PlayStation 4 and PC.