Sony, Microsoft and Nintendo have been going at each other for years now, so no one expected anyone to slide under the table and deliver a sneak attack, but that’s what microconsole developers were trying to do in 2012. The market of microconsoles is bigger than ever before, with Amazon’s 2014-scheduled venture into Android-based home systems marking the 12th system in the field to be announced/released/teased since 2012. Despite the massive amount of options, the systems have been financial flops, simply becoming running jokes for gamers who continue to use Sony, Microsoft and Nintendo consoles for their gaming. But every with all that negativity, more and more companies are preparing Android microconsoles for launch, like arranging deck chairs on the Titanic. The gist? Android microconsole creators are trying to solve a problem that doesn’t exist with a solution that no one likes.

The industry’s fascination with inexpensive Android consoles could be attributed to the Ouya, a cheap alternative to the expensive consoles delivered by the Big 3. The Ouya took off on Kickstarter in 2013, and quite frankly, it was an interesting prospect. This idea of a cheap, Android-driven console alternative to the stalwart kings above was something that a lot of people didn’t expect. It preached freedom for developers and encouraged ideas like modding and even hacking for consumers. It became a tremendous success on the crowdfunding laboratory of Kickstarter, becoming one of the most profitable efforts to ever grace the website. It was a tiny sprite amongst Sony, Microsoft and Nintendo’s monolithic golems. But despite its success, it still wasn’t catching gamers’ eyes in the same way its competitors were. It was more a curiosity, a jumping point to see if Android-based consoles had a proper place in the market. Sadly, the Ouya team struggled with a number of issues, including gathering exclusive support from developers and even claims of Kickstarter fraud. But the Ouya’s release was humble…almost too humble. Despite the Kickstarter stardom, the Ouya system was panned for its build quality and lackluster lineup of games. The Ouya’s Free the Games Fund added more trouble with under-the-table inflation of crowdfunded backing to achieve success in the program. The Ouya has become an obscurity. Since its release, I’ve only seen Ouyas on store shelves once, buried beneath the point cards for free-to-play browser games like Neopets and Club Penguin. 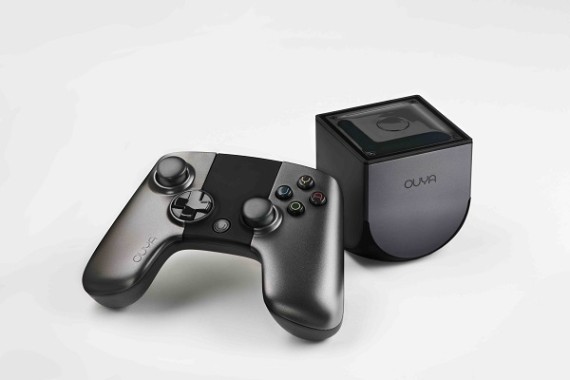 But even from the get-go, gamers knew that nothing big would come of the Ouya. It had the vision, but it didn’t have the tools to make this “free gaming” environment take off. Despite all its woes, though, the Ouya still generated a lot of discussion in the gaming world, enough discussion that other companies wanted to get a piece of that pie. So began the tidal wave of Android-based microconsoles. Established hardware companies like Nvidia and Mad Catz, fresh crowdfunded endeavors like GameStick, everyone wanted on board. A new market was growing, a market where inexpensive console alternatives were popping up everywhere (and the options are still enormous).

While the sheer number of microconsoles is certainly impressive, the gaming community has ignored their presence, only recognizing their existence as a joke in the huff and buff of the console wars. After the Ouya’s performance on the market, there’s really no reason to take this far-off corner in the industry seriously. They’re a subgenre of tech devices so riddled with incompatibility with their market that they’re practically destined to fade into the background.

The appeal of these microconsoles is normally attributed to their price, which rarely cracks $200. The Ouya was a cheap $99, a fraction of the price Sony, Microsoft and Nintendo tagged to their systems. It didn’t require much to manufacture at all, but the price isn’t just there to appeal the customer; the Ouya’s price reflected its value. The system wasn’t built for massive AAA games like Killzone; its appeal was inexpensive Android-run games, games that even a smartphone could potentially run. Android games aren’t necessarily deep, either. Some of the most popular games on Android like Angry Birds or Cut the Rope are portable titles, ones that work best in short bursts. Being able to play a quick puzzle during a bus ride, then close up and move on is why these games were designed. They’re like potato chips; brief bits of gameplay to satiate a minor hunger, not some massive brunch buffet. The Ouya could manage those small, “potato chip” games, but wouldn’t have the power to make anything AAA (or even AA). Gamers couldn’t be convinced purchasing a console that could only provide small games, especially when they’d run fine on a smartphone or tablet (devices that wouldn’t be tied to the living room). These issues persist in systems like the Mad Catz MOJO and Gamestick; these systems are simply ways to use Android on your television at home, rarely going any further than that.

Some of these systems have tried to combat that simplistic identity, but oddly enough, have made their situations even worse. The Nvidia Shield system didn’t only have Android capabilities, but it also touted its ability to stream games from your PC and to your TV. These features were certainly interesting, but technical issues prevented the streaming feature from working optimally. Due to its wi-fi requirement for streaming, you couldn’t take the system out of the house, a big faux pas for a handheld. Lag persisted, game libraries became ghost towns, and to top it all off, the system was much more expensive than other microconsoles at a whopping $249. This price point (one even higher than one of its competitors, the Nintendo 3DS) was a colossal downside to a system that was already technically flawed. Even worse, other systems like the JXD share the Shield’s price point of $249 without any noticeable advances beyond the ability to play Android games.

And that’s why these microconsoles are so underwhelming to gamers: they don’t provide anything substantial in their home console context. The Android games that these consoles are built for are games that people can play elsewhere on cheaper and more convenient hardware. Many people carry a smartphone or a tablet with them anywhere they go; it’s a go-to convenience, so small, bite-size games are perfect there. When you’re in the living room, your options are broader and you want to take advantage of the more relaxed and down-to-earth atmosphere with something more engaging and substantial. A cinematic epic like Uncharted or a multiplayer party in Super Smash Brothers Brawl: those kinds of games blossom in the living room. Where you’re on the go, it’s harder to be engaged on a small screen, so the brief distractions of Cut the Rope make sense.

And this brings us full circle to Amazon, who’ve continuously said that they’re set on releasing their upcoming game console this year. While details are scarce and no specs have been listed, a price point of $300 has been targeted, one equal to Nintendo’s Wii U Deluxe Set and just $100 less than Sony’s PlayStation 4. Amazon has been successful with their Kindle Fire tablets, inexpensive Android-based tablets that challenged the expensive premium of the iPad and opened up a whole new market for smart devices. Amazon opened their proprietary app, music, movie, book and game markets, going to town and making bank in their new market that they created. But the issue, once again, lies in price. A Kindle Fire HD is currently $139 in a small 8GB model and it can do everything that Amazon’s supposed $300 game console can do. To make matters worse, the “Kindle Box” like all home consoles, is tied to your living room. The portability is null. Amazon is tying down the portable smartphone game market. It’s putting an already substandard game genre into an environment where its greatest strength, portable convenience, doesn’t exist.

The problems of the microconsole market continue to stick around and many manufacturers have already seen the edge of the cliff thanks to poor sales and low market presence. They want to bring games that already lack lasting appeal to an environment that depends on that appeal. They’re trying to solve a problem that doesn’t exist. Amazon’s game console is likely to be the most successful of the microconsoles, due to the retailer’s massive presence in tech gadgetry, but unlike the Kindle in its tablet market, this idea of opening up a market for cheaper alternatives in game consoles doesn’t have the fundamentals to work correctly. Gamers expect more from their console games. They expect better presentation, more involved design, and artistic elements that an Angry Birds game simply can’t deliver. Microconsoles are an effort to bring the brief distractions of “potato chip” games into home consoles’ world, a world where bigger experiences are honored and smaller distractions are condemned.

And here we stand in a wide sea of irony. Despite the repeated flops and underwhelming performances from them all, the microconsole market, a market that no one really wants, is bigger and more saturated than ever.

What are your experiences with microconsoles? Share them in the comments!