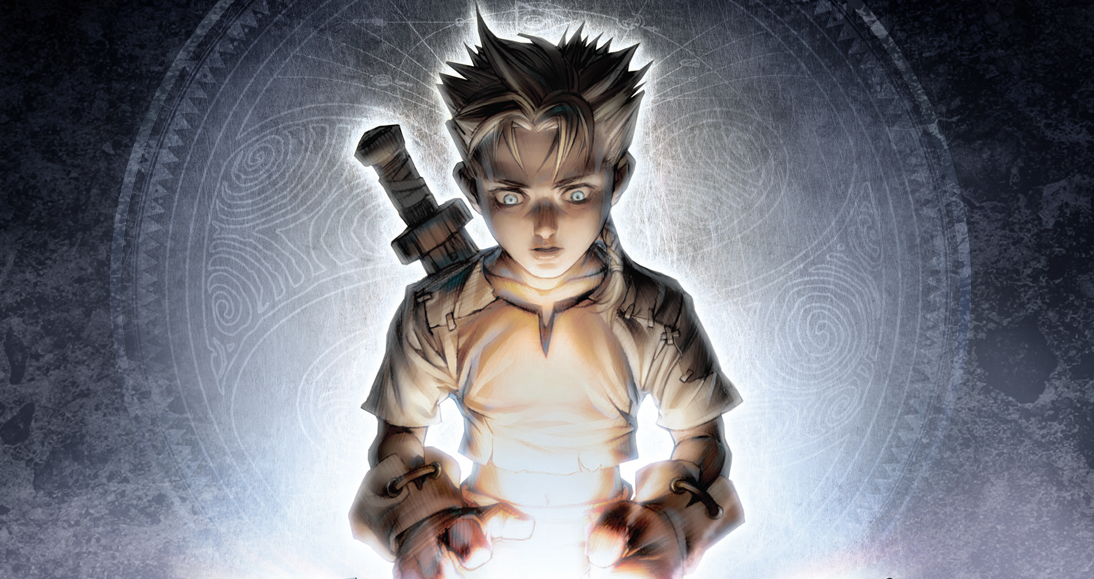 There’s something odd about an HD port built for a console which itself has games that are being ported to a superior console. Let’s reflect on Fable Anniversary for a second: it’s a 2014 Xbox 360 remake of an Xbox game from 2004. We’re in an age where people are demanding for spectacular looking games like Grand Theft Auto V and The Last of Us to be ported to Xbox One and PS4, and this is an Xbox 360 port of an original Xbox game. As such, judging it is fairly hard to do after spending countless hours over the past few months scrutinizing next-gen ports like Tomb Raider, Madden 25 and Call of Duty: Ghosts, when Fable Anniversary would be a resounding success if it matched the 360 quality of any of them. Still, while a remake of Fable might have been better suited for release before Fable II or as a three-pack with its sequels on Xbox One before Fable IV (please?), the sheer fact that Lionhead and Microsoft care to do it at all is great fan service for players who have had to deal with an antiquated game — classic as it may be.

In fact, it’s such a classic that describing such a widely-known story seems irrelevant until you realize that there are prospective gamers who weren’t even out of diapers when the game was originally released, so here goes: Fable sees you take the role of “The Hero of Oakvale” who begins his quest as an unassuming boy until his village is brought to ruins by invading barbarians. The hero survives and is rescued by an even older hero named Maze. Maze sees great potential in the boy and takes him under his wing at the Heroes’ Guild. The hero grows up here, honing his skills and training for the perils that lie ahead. When he’s finally old enough, he sets off on his quest and can choose to either be the savior of Albion or its reckoner. This is of course the major gimmick of Fable, a game that allows you to choose the path of your character throughout their entire life. It was a concept that was ahead of its time in 2004 and remains interesting even after ten years and countless imitators. Of course, it’s major flaw is still the missed potential that was put in the spotlight thanks to the endless hyperbole from Peter Molynex. 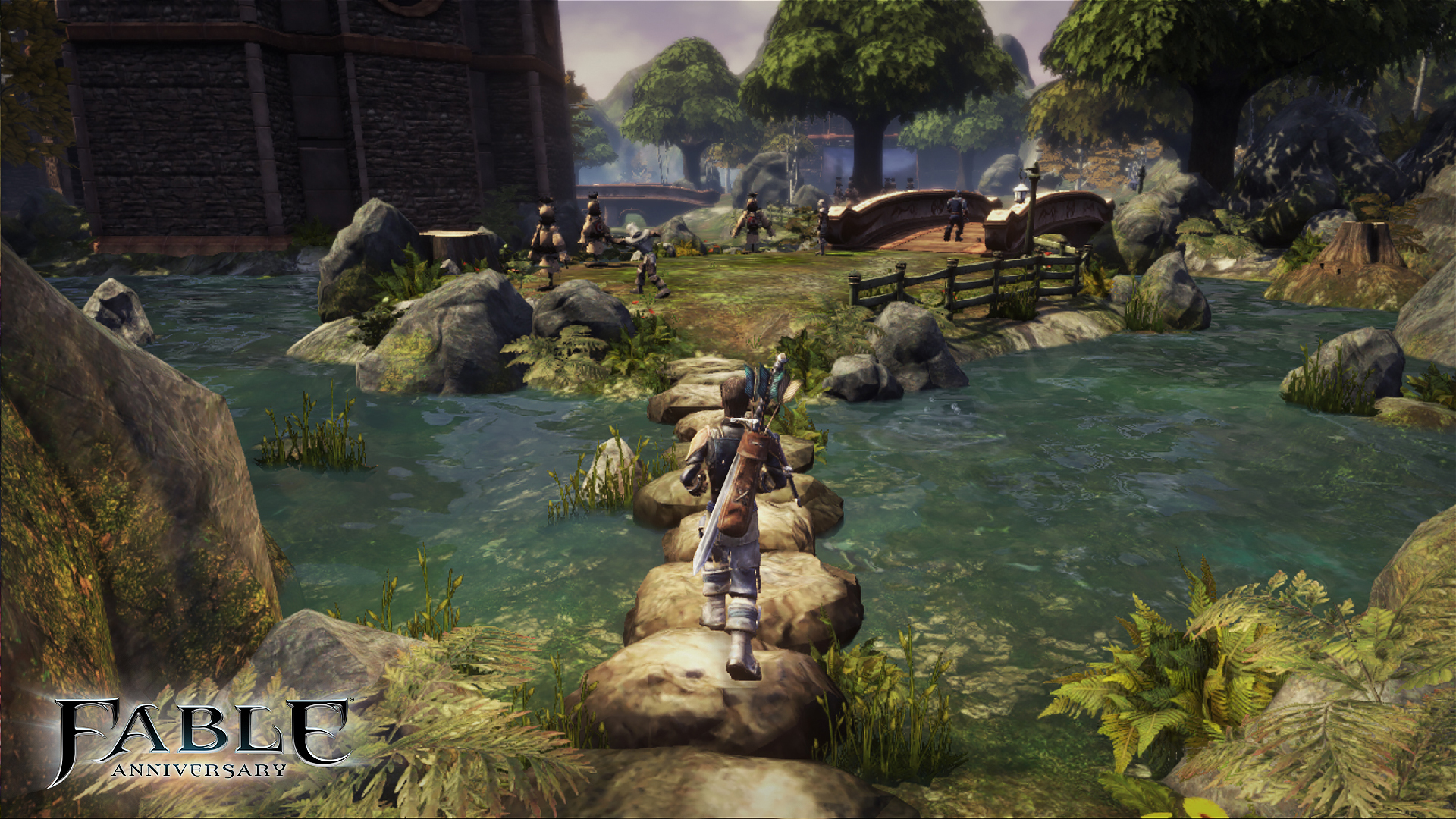 Sure, you see the hero grow from a child to an adult, but the childhood lasts about five minutes and adolescence no longer than ten. The rest of the game simply sees you controlling your average adult warrior. There are also elements like marriage and family drama that come into play that never realize their full potential. Instead of being an experience where you truly assume the role of another being, it’s built like an average RPG with some nifty life-building elements thrown in. Still, it’s a criticism of the game as old as time itself (or at least the Xbox 360) and the important thing is that the game is still enthralling all the way through.

Gameplay itself is a nice blend of action elements with those traditional to an RPG. On the offense, a melee weapon, long range weapon and magical will powers are always available, each assigned to a different face button. For defense, numerous gear combinations are available to ensure you’ll always be protected in the heat of battle. Plus you can block and roll. Enemies tend to rush you and offer quite a challenge for those unfamiliar with the proper strategies. Grinding isn’t a common occurrence, but going into battle well stocked with items is always necessary. While it’s not the deepest system, it’s still arguably the best one in the Fable series and remains enjoyable today. 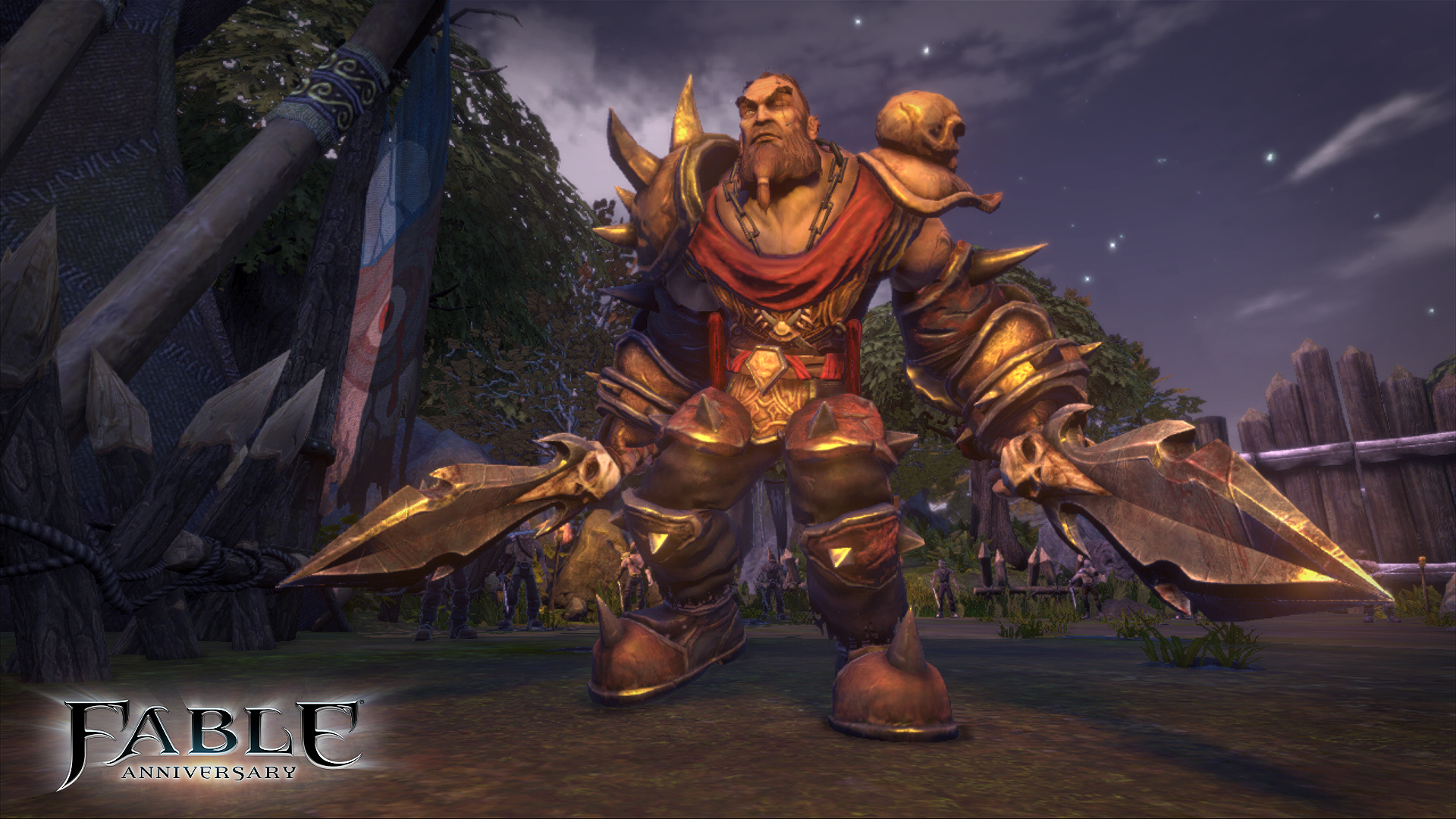 Of course, it’s no secret that Fable is a great game, so the most important aspects of this release is if it’s aged well (read above) and the quality of the port. Simply put, the result is leaps and bounds above the original. Fidelity, special effects and lighting have all improved and it’s clear to see the differences in almost every area. Upgrades to characters and building exteriors are the most noticeable, with faces seeming more realistic and less pixelated and buildings revealing never-before-seen nuances. Even trees in the backgrounds and leaves on the pathways of villages are more detailed. Everything has a smooth look which gives it a nice overall aesthetic comparable to other Xbox 360 games. The only flaw in the new look is that sometimes things can be a bit too smoothed over and come across a little smeary. Sometimes the sharp edges of the original helped to keep objects separated, something that can sometimes be a problem here. The other continually noticeable boost is the lighting, with plenty of new shadow effects and nuances between different lighting situations, where as before things were basically light or dark. Overall, while it’s not perfect and hampered by the fact that practically every Xbox 360 game now looks long in the tooth, it’s certainly the preferable way to experience the game — nostalgia or not.

Another big improvement is that of the interfaces. The previous ones were rough even in 2004, seeming basic enough to be more at home with PS1-era games. Thankfully, they’ve been completely overhauled for this release, matching up better with the subsequent Fable games. Navigation-wise, they’re a bit too clumsy. The triggers, shoulders buttons and analog sticks all come into play when scrolling around, resulting in a learning curve that shouldn’t exist for menus. Still, there’s only so much that can be done and at least the old interface wasn’t simply re-skinned. 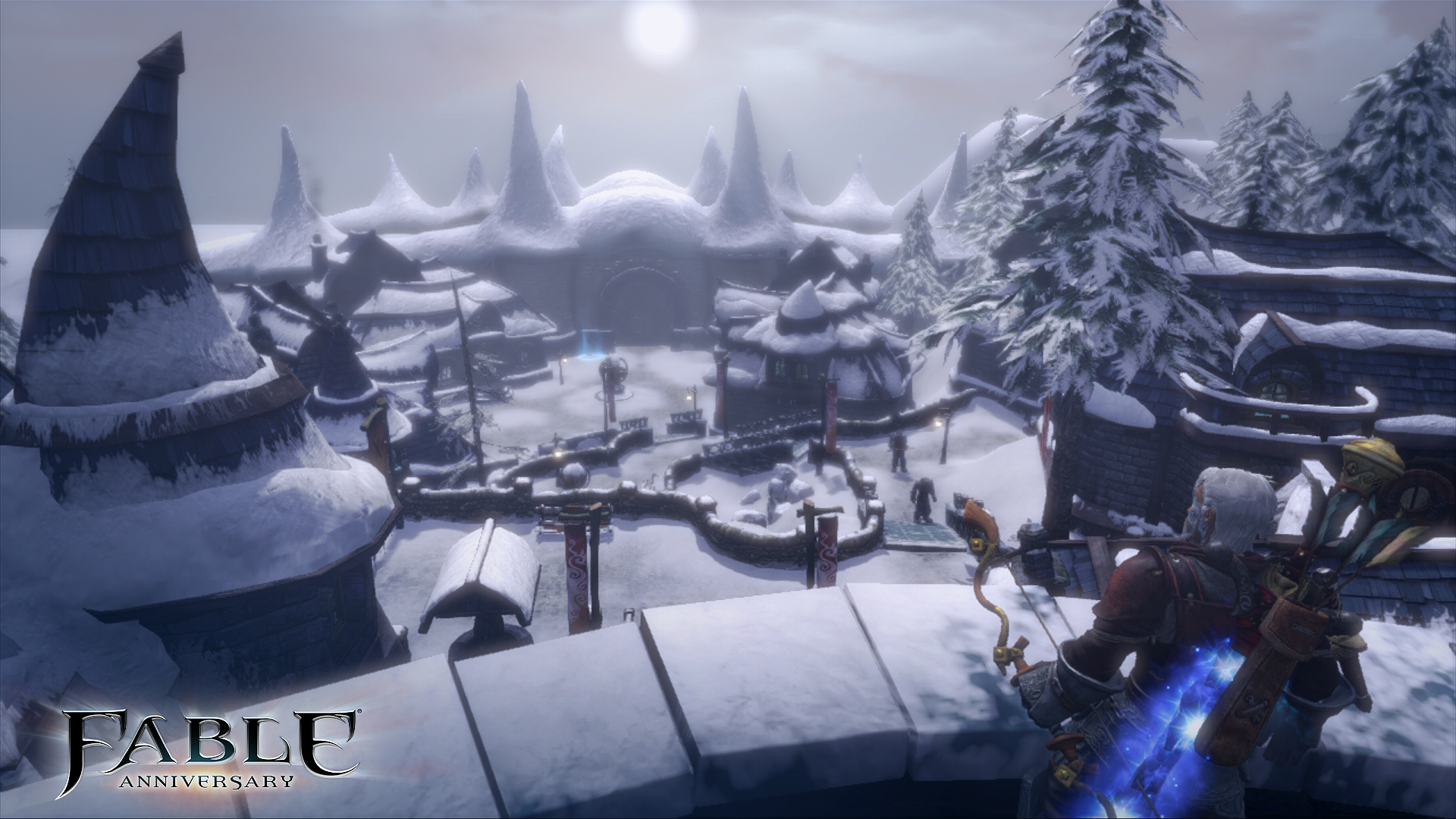 The final new feature in Fable Anniversary (besides achievements) is that of SmartGlass, something that is weighing heavier and heavier in overall experience these days. As admitted by Lead Designer Ted Timmins, it was basically implemented here as way to test the technology’s capabilities for future implementations. Thanks to that, there are actually a few interesting features that the app offers. Unsurprisingly, it’s basically an interactive map, but they’ve worked with Prima to also provide the locations of key items and characters (without going into too much detail). While this may seem a bit like cheating at first, it’s helpful enough only to ensure that you won’t get lost and makes it so you won’t result to using a full-blown strategy guide.

Another cool feature is that of photograph locations throughout the map that when touched display a viewpoint from the original Xbox game. This is quite nifty as it allows you to match up with your television and see exactly what has been improved for the Anniversary edition. It’s also said that backgrounds for key players have been written and are viewable upon meeting them, but I was unable to find how to access these. A title update will be supposedly be released on launch day, so perhaps they will become easier to find then. The only real negative of the experience is that it doesn’t show the NPCs that can be interacted with on the map. Unfortunately, this makes it so you can’t rely solely on your tablet/smartphone, which is a bit of a bummer. 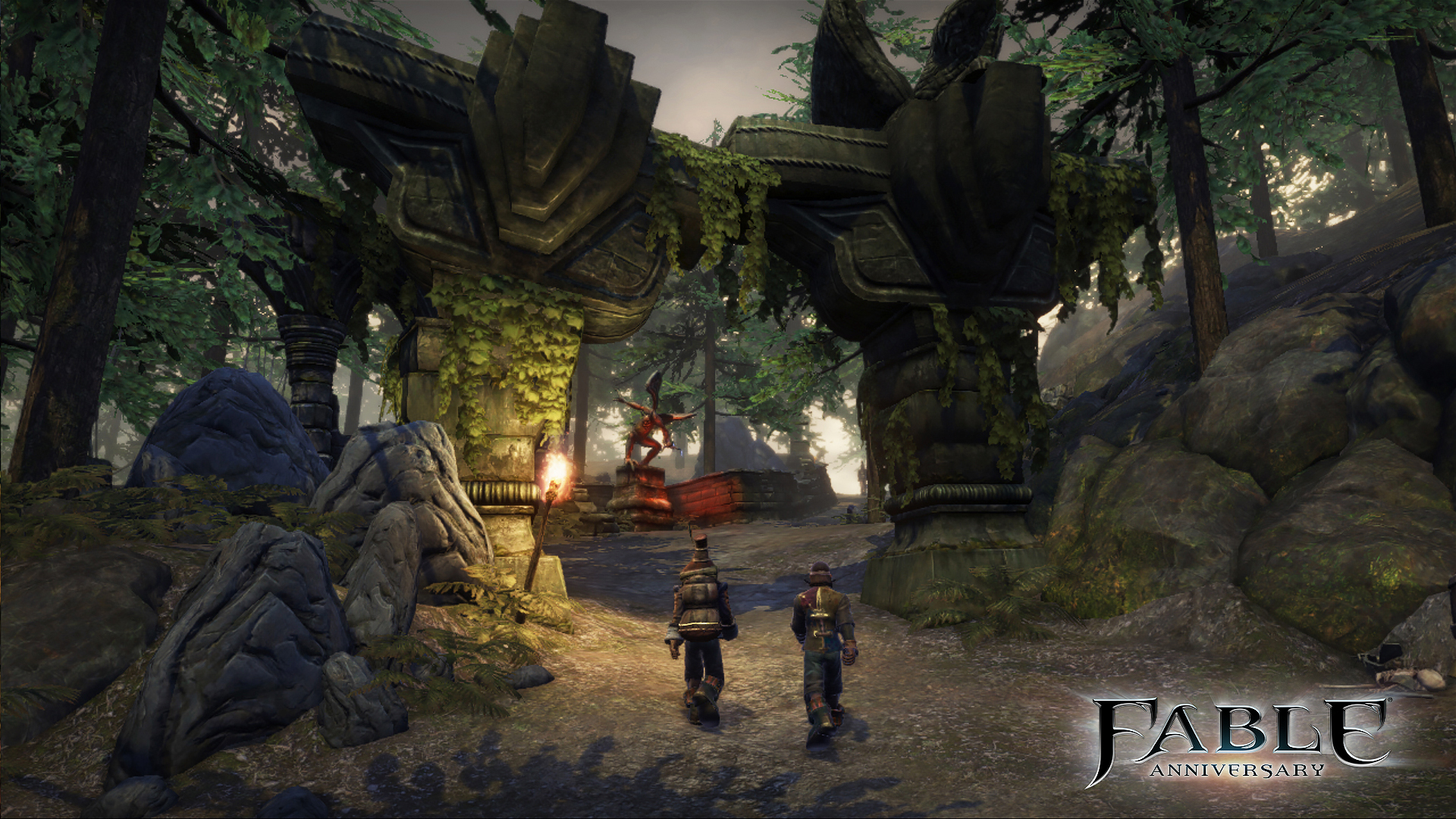 Fable Anniversary is a port of ten year old game released on eight year old hardware after we’ve witnessed the power of next-gen. Yet even with so much stacked against it, it manages to impress. There’s not much of a “wow-factor” because of its ill-timed release, but with the exception of completely rebuilding the game for Xbox One, there simply isn’t much else that could be done that isn’t accomplished here. Sound, functionality and graphics are all substantially improved and breath new life into a game that has aged remarkably well. Even after two sequels and console generations, Fable has the uncanny ability to suck you into its adventure through the world of Albion. Anniversary is more of a preservation if anything, ensuring that the entire franchise can now be played in the same manner on the same console. As a museum piece, it’s a wonderful effort that ensures the game will remain relevant for a new generation of players. As a game, it’s the definitive edition of a superb title that has a lot to offer even in 2014.