We were pretty big on Faif when it first launched on the Google Play store. It offered a unique twist on the match-3 — or 5 in this case — genre, and spiced up its RPG mechanics with a hint of gambling. That’s why we decided to sit down and discuss Faif with Nico Saraintaris, game designer and co-owner of Beavl.

[Hardcore Gamer] I know this is a silly question, but what exactly is Faif? What does the word mean (if anything), and why is that the title of the game?

[Nico Saraintaris, Game designer, Beavl] Faif is a turn-based Puzzle/RPG game based on gambling. After choosing 5 adjacent tiles, you only get one! So you’ll need to play wisely with the odds and defeat your enemies before they defeat you. It’s still in development, so expect awesome features like boss fights, permanent rewards and lots of new content. We are updating the game almost every week.

About the name, you know. We are an independent two man studio from Argentina, so English is not our mother language — hence the grammar awkwardness or the funny sentences! Faif is how we depict in our heads the pronunciation of “five.” We know that the correct form is /faɪv/ but hey, faif works for us. 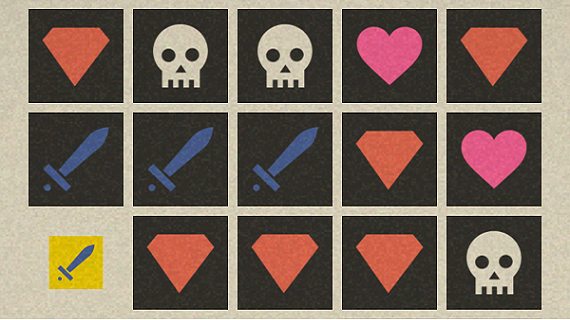 What was the original idea behind Faif?

Last Ludum Dare (#LD28) was kind of weird for us. We’d decided to skip it — busy weekend, one of us turning 30, etc. — but on Monday, the last day for jamming, we had an early meeting, talked a little about how awesome the theme was (“You only get one”) and took the day off to make a game.

While chatting and doing some brainstorming, we came up with a really simple core idea. Select five tiles, get only one. And why five? Because we thought that it’d make things easier to play with the odds. You know, you choose two swords, two skulls and one heart and you have 40% chance of getting swords, 40% chance of getting skulls and 20% chance of getting hearts. After this initial idea, we designed the attack move, one of the core rules of the game: if you get a sword, you’ll deal +1 damage for each skull in the selection. A nice risk/reward rule, considering that by getting a skull you lose a life. And for the rest, we are still tweaking the whole thing and working on general balance and lots of surprises.

What are some challenges you faced converting the original version into the much more beautiful version we see today?

Adding more content and trying not to unbalance the whole game! We are working on more spells, better upgrade system, some rewards and boss fights. And that’s the reason why players sending us their ideas is so important to us. We play the game a lot, but man, some feedback we’ve received was really eye-opening and really spot-on. 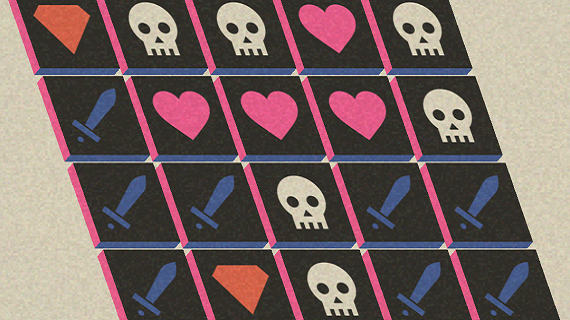 Was there any particular influence behind the mechanics and design?

Concerning mechanics, we love mashups. You know, you have two things that are well-known, you mash’em together and voilà! If you’re lucky, you have something entirely new and exciting. Dungeon Raid, 10000000 and Puzzle Quest are games we really like, and those are also labeled Puzzle/RPG. We also like more obscure mashup games like Shadow Break (breakout + beat’em up).

Speaking of design, we fell madly in love with Risograph Calendars by J.P. King. We used his palette, took the geometric shapes and added random movement to the picture. We designed everything else, like the buttons, tiles, icons, etc. and added even more movement to the mix. Including switching the board when it’s you opponent’s turn, something we are really proud of and players seem to love!

How do you feel about the response, and what are you doing to expand on the original concept?

Wow, the response has been great! Lots and lots of players email with cool and really crazy tweaks and ideas. As we said, our main objective is to add new content and work on general balance — and by new content we mean more instant spells, rewards, permanent stuff, boss fights and more side story. After all these we’ll think on new game modes. We’ll see how it turns out. We are extremely thrilled with the game and we love all our players showing so much interest in it. Thanks, thanks and thanks, you are truly amazing.

You can play Faif on the Beavl site or support the developers by enjoying the 50% off early release sale on Google Play.