Earlier this week, Sega debuted the Sonic Boom CG animated series for Cartoon Network. Pitched as a fresh approach to this long-running series, Sonic Boom was just as confusing as it was ambitious. When the series was announced to have tie-in games both on Wii U and 3DS (fulfilling the third tier of Sonic’s exclusivity on Nintendo’s consoles), the trailer left the internet in a state of post-apocalyptic dizziness. It was so disorienting seeing a Sonic trailer with so many non-Sonic ideas floating about (and don’t even get me started on the Skrillex music in the background), but Sonic Boom’s vision was something of a blank canvas, a way to reinvigorate this series with fresh talent and unheard-of alteration. Sonic Boom is Sega’s proclaimed “renaissance” of the Sonic series, a way to give the long-running series an aesthetic update, and while it’s far too early to tell if this is the direction for the series to go for good, there are many reasons as to why this game will be one of the most important games ever released in the Sonic the Hedgehog franchise.

Considering Sonic’s history, it’s easy to consider Sonic Boom a betrayal. It’s a way of throwing away the past and starting from scratch instead of simply refining it. The last time Sega tried to “reboot” the Sonic series, we got Sonic the Hedgehog on 360 and PS3 (commonly referred to as Sonic ’06), quite possibly the worst game in the series. Sonic ’06 attempted to put a bunch of colorful anthropomorphic animals into a human world that looked disturbingly similar to Final Fantasy; from the get-go, it was bad. The game was intended to reset the canon, ignoring critical moments like Shadow’s past in Sonic Adventure 2 and Blaze the Cat’s history in Sonic Rush. In a nutshell, it was an entirely separate universe from Sonic prior to that. Every character’s background was changed to fit their new roles, which made it all the more confusing when the game was represented in Sonic Generations, confirming that Sonic ’06 was actually a part of the Sonic canon. The skepticism surrounding Sonic Boom is surely connected with this failed effort to reboot the Sonic series. Sonic ’06 changed so many things, many for the worse, so Sonic Boom’s trailer was jam-packed with differences from what gamers grew up with in Sonic the Hedgehog 3 and even Sonic Adventure.

But before we go over the gameplay itself, let’s address the elephant in the room: the characters’ new designs. The Sonic Boom versions of the four main heroes have been prodding the minds of long-time fans of the series since that first silhouetted teaser last year. Like the “green eyes” argument from yesteryear, now it’s the “blue arms” argument, a direct address of Sonic’s now blue arms. But that’s a petty complaint. Overall, the characters seem to stay true to their classic designs, with the exception of Knuckles, who’s much taller and more muscular (at the chagrin of the fans). Sonic, Tails and even Amy seem to follow a more subtle re-working, with most promotional art following Sonic’s way-past-cool tradition and Tails’ gearhead mechanic identity. Amy’s promo art seems to display more of an attitude for her character, which appears more confident and active than her Sonic-chasing damsel history (the trailer for the game actually shows some interesting acrobatics for her, both in swinging across levels with her Piko Piko hammer and even landing on her feet after a great fall while her friends land flat on their backs).

As of right now, the only other long-time Sonic character to be announced is Dr. Eggman, who is still up to his old tricks and hasn’t changed much aesthetically, though other characters like Shadow could appear later on. Aside from the quartet’s creepy fascination with bandages, the heroes’ personalities don’t seem to take too many sharp left turns compared to their appearances in Sonic Colors and Sonic Generations. The voice acting crowd is supposedly the Generations crew, with Roger Craig Smith (Chris Redfield from Resident Evil 5) reprising his role as Sonic. The other characters appear to retain their voice actors, which is good, since another voice cast overhaul is sure to offer a degree of confusion and demand re-adjusting all over again.

But one of the most noticeable changes to Sonic’s history is the game itself. Sonic Boom doesn’t look like a Sonic game. Yes, there are high-speed sections, but a majority of the trailer didn’t have much of that. Instead, you see the four heroes jumping, swinging and solving puzzles. The trailer never seems to show off the speed equation for Sonic the Hedgehog. It demonstrates multi-faceted levels like caves and factories more than linear speedways filled with loops and corkscrews. With an emphasis on slower platforming instead of momentum-driven speed sections, the gameplay appears surprisingly varied. It’s interesting to note that Sonic Boom is not being developed by long-time devs Sonic Team; instead, it’s being developed by Big Red Button Entertainment, a Western studio featuring Bob Rafei, one of the original founders of critically acclaimed development house Naughty Dog. That certainly explains why Sonic Boom’s gameplay is so unlike that of past 3D Sonic games; it actually looks more like a PS2-era platformer, such as Naughty Dog’s Jak and Daxter.

One big example of this gameplay shift is a scene with the four heroes back-to-back, about to fight a crowd of robots in what looks like a typical combat scenario. Combat is not something you really associate with a Sonic game (unless you want to count the Werehog segments in Sonic Unleashed, but I sure as hell won’t). Combine that with a massive boss fight closing out the trailer and Sonic Boom appears to be one of the least “Sonic” games ever pushed by Sega. It clearly has a Western style to it; characters are expressive, but still involved in their own world. Gameplay styles like Tails’ laser gun and Amy’s Piko Piko acrobatics seem like something ripped right from a PS2-era Sony platformer. 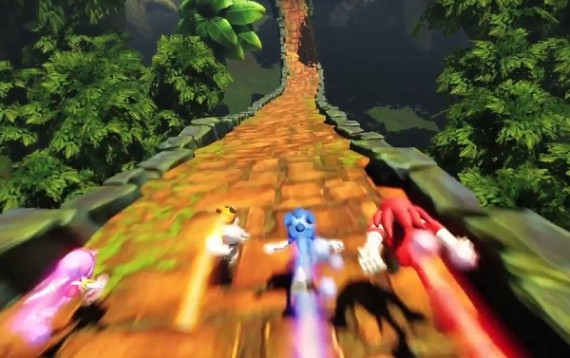 Now, is that a problem? Well, not necessarily. While some Eastern publishers have had major issues getting Western developers to make great games for their long-tread series (Resident Evil: Operation Raccoon City certainly comes to mind), Big Red Button Entertainment certainly has the pedigree on their side. This shift in gameplay design isn’t as disorienting since it’s in a style that the developers are clearly comfortable with. Rafei and his team at Naughty Dog made Jak and Daxter into critical darlings and iconic characters for an exceptional platforming empire. With so much pedigree in the group, it’s tough to imagine the team being unable to change up the Sonic series in that way.

But there still is a looming problem that Sonic Boom seems to unearth: this doesn’t look like a Sonic game. It has combat. It has slower platforming. It has laser gun shooting. Those things aren’t really things that you’d associate with The Blue Blur. And with this dramatic shift in gameplay style, there is a possibility that the series’ trademark element, speed-based platforming, will be neglected. The trailer alone seems to deemphasize that mechanic in favor of tighter variety and multiple gameplay styles. There is the risk of Sonic the Hedgehog losing that identity, and instead dividing up the gameplay between the characters and their respective abilities. It’s going to be a challenge for Big Red Button Entertainment to retain that tradition instead of simply designing a Jak and Daxter game with blue paint covering it and the Sega logo slapped on the box.

Sonic Boom has left countless gamers in a stupor simply with how drastically different the game is from previous Sonic games. Even looking beyond the buff Knuckles and overuse of bandages, Sonic Boom’s trailer is a sign that the speedy gameplay can’t carry the series on its own much further. Back in the 2000’s, the trifecta of Sony platformer series, Jak and Daxter, Ratchet and Clank and Sly Cooper, were all embracing variety in their platformers. It was no longer only about jumping gaps and collecting items; it was about action-focused combat, multi-layered level design, and pretty much every gameplay mechanic you could possibly think of. But these series became some of the best ever released on the PS2, while also creating some memorable characters to meet and worlds to explore. Sonic Boom seems to be that pivotal moment where that multi-faceted sense of diversity in gameplay is finally able to enter Sonic’s universe. Unlike Sonic and the Black Knight or Sonic Unleashed, Sonic Boom is a way for these new gameplay ideas to become integral instead of extraneous. For better or for worse, it will change everything.

Sonic Boom will be one of the most important games ever released in the Sonic franchise because it is likely to determine what kind of direction the series will follow over the next decade. Big Red Button Entertainmentz: you guys have your work cut out for you.