We’ve already reported on the console differences for the upcoming Metal Gear Solid V: The Phantom Pain. What we didn’t talk about in that post, however, was Konami’s announcement that they have a little something extra planned for PlayStation 4 and MGS fans. It goes without saying that limited edition consoles are some of our favorite ones around. Going back to the days of the Biohazard Dreamcast, Final Fantasy III Limited Edition DS and Tales of Symphonia-emblazoned GameCube, we have had an affinity for these exorbitantly grand (and rather expensive) systems for quite some time. Thus, when we say that MGSV’s Fox Edition PlayStation 4 ranks among our favorites, you then know it has to be good.

Konami’s Fox console will be the PlayStation 4’s first special edition. So what exactly is “special” about it, you ask; simple: the giant Fox Engine logo stamped on the top, glossy section of the PS4 itself. While there’s not much else that sets it apart from the standard systems, we see its minimalist design as classy and elegant — nothing like that Yakuza PS3 released some years ago.

Nevertheless, the system is up for per-order on the Japanese Sony Store for about $460, which isn’t too bad at all — especially considering these bad boys will show back up on Ebay in a few months for at least twice that amount. That being so, at this time it’s still unclear as to whether the bundle will launch outside of Japan, though we’re suspecting we here in North America will never see this puppy on store shelves. After all, special edition consoles just don’t seem as big of a deal here as they do overseas.

Ground Zeroes is scheduled to hit store shelves on March 18 for PS3, PS4, Xbox 360 and Xbox One. 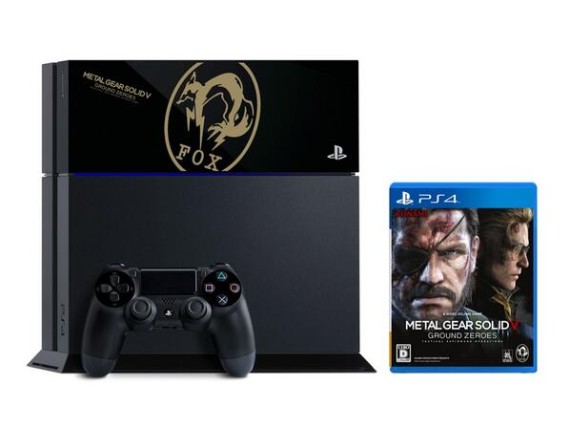