Well, I didn’t see that coming. A lightly-promoted animated film based on a toy released in February with a budget just north of 50 million dollars is not exactly a recipe for success. Yet against all odds, The LEGO Movie managed to score a 96% approval rating on Rotten Tomatoes and in just two short weeks has grossed over 200 million dollars worldwide. It’s a well-deserved success as it’s one of the best animated films in years and perhaps one of the biggest crossover crowd-pleasers of all time (go ahead, I dare you to find somebody who didn’t like it). Just as ironically, however, its video game adaption is practically facing the same odds as the movie itself — relatively low budget, little promotion and a questionable genre — but can it manage to overcome the same obstacles? 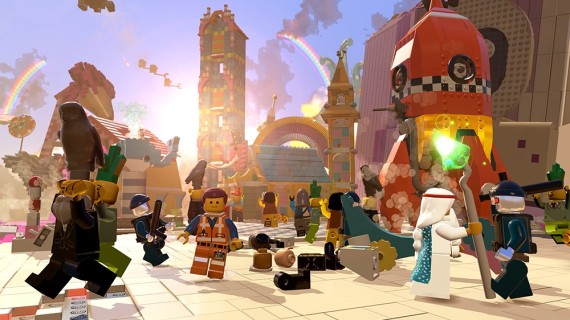 Surprisingly enough, The LEGO Movie Videogame follows the plot of the movie almost exactly. You wouldn’t think that that would be a rarity in movie tie-ins, but they are generally developed before the movie has even been finished, giving developers little idea for what settings to include. Basically, an evil mastermind named Lord Business steals a superweapon dubbed the “Kragle” and soon rises to become the most powerful man in the world. While everything is (seemingly) awesome, there’s an undercurrent of mistrust and corporate blandness running through the world. There’s little room for creativity and everybody seems to live the same sort of life guided by instructions. It’s clear Lord Business is up to something evil, but there is nobody capable of stopping him until our hero Emmet falls down a hole and finds the “Piece of Resistance.” Now, who was once an ordinary construction worker must go on a quest to stop Lord Business and return the world to its former glory.

As mentioned above, the game rarely deviates from its source material. This means you can expect a lot of the same environments that showed in the movie, whether that be the city, the old west, Lord Business’ skyscraper and more. The environments match their film counterparts shockingly well, down to nuances in the decor in many cases. The story is told through clips from the movie which act as cutscenes. As such, any player would be strongly advised to see the movie before playing the game, as not only will the appeal not be as strong, but the general plot of the movie will be ruined. The voice acting is also up to snuff. Of course all of the original actor’s voices are heard in the cutscenes, but the quips throughout the game also sound like them as well. From what I could find out, neither Chris Pratt nor Elizabeth Banks participated, but whoever they chose for sound-alikes are dead ringers.

Same as how those who’ve seen the movie know what to expect from the plot, anybody who has played any of Traveller’s Tales previous LEGO games know exactly what to expect from the gameplay: a blend of puzzle and beat ‘em up mechanics. The puzzles primarily center around finding the right item to open up the next area, which generally involves building a new LEGO item. For the most part the puzzles are serviceable, but they’re not quite as inventive as previous titles. The combat is where the game as a whole falls short, however, as it boils down to hammering the X button with little skill involved. This is in stark contrast to the last LEGO game, LEGO Marvel Super Heroes, which upped the ante with hundreds of characters who each had multiple abilities.

Much like The Lego Movie is a surprisingly great film, The Lego Movie Videogame is a surprisingly good game. Unlike the former, unfortunately, it falls notably short of greatness. It’s a game that was clearly designed for an adult and child to play together, as the challenge is never too great and the mechanics never too deep. In many ways, this is commendable as it (perhaps purposefully) matches the message of the film. For adults who’ve had a great time playing through some of the previous LEGO adventures, however, it will likely prove too simplistic. The production budget, depth and sandbox features are regrettably missing, making it fall short of the best of the series. Still, given that this is a movie tie-in that was likely rushed out to meet the release of the film, it’s a notable success clearly created to give families a memorable video game experience together instead of simply cashing in on a hot property.