Magus confounds me on every conceivable level. I have no idea how it got made, why it got made, or for that matter who could have possibly thought that anything in the game was a good idea. And yet, I am immeasurably glad that it did get made, because it is a rare example of perfection in action. Everything that a game could possibly get right, Magus gets spectacularly wrong. It is a perfect failure, a gem riddled with flaws so copious and intricate that their gorgeous patterns become the focal point. What’s better, if any of this is intentional, the developers haven’t let on at all. It seems like Aksys and Black Tower Studios genuinely believe that their hilarious belly flop is an elegant swan dive.

The game kicks off with a pre-rendered cinematic that would have been a little underwhelming in 1995, before booting you to a title screen where an unkempt bald guy stands around looking confused. This is the titular Magus, a man who has been imprisoned in the King’s dungeon all his life, because this is a western RPG and of course he has. And just in case you thought the writers had avoided the most overused excuse to dump exposition on the player, we learn this in a conversation with a woman who has partial amnesia. This woman is Kinna, an assassin who has infiltrated the prison (by being arrested) to find Magus because, as it turns out, he’s a god. Once this is explained he immediately starts fighting his way out of prison. In Magus if you’re not talking, you’re fighting. 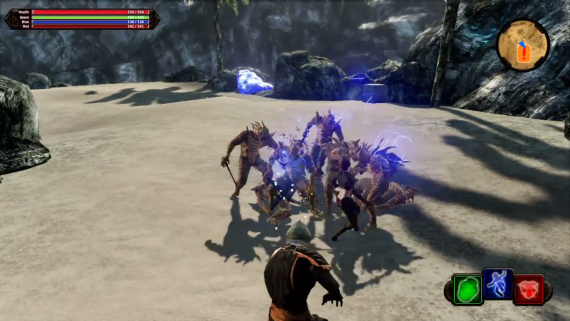 The combat mechanics of Magus are intricate and multifaceted. There are three colors of magic, each with its own MP bar and set of spells, which you can fuel by draining energy out of glowing crystals. There are fully 8 different kinds of equipment that can boost your proficiency in any of the colors, as well as your overall strength, dexterity, and vitality. You can pour points into any stat you wish when you level up, as well learn a wide array of spells that allow you to drastically alter the battlefield. Absolutely none of that matters, because your basic attack is a gun with infinite ammo, and most of your enemies are armed with swords. Fights are so one-sided that I didn’t even realize I could build my stats until I reached level 14. Even if you turn the difficulty slider to max, this game will never challenge you. Far from making the game boring, this largely ends up working in its favor.

Though it’s pretty much a given that you will overpower your enemies, you are positively spoiled for choice as to how you want to overpower them. Your basic attacks come in three flavors: a machine-gun-spray of small green orbs, an accurate three shot burst of larger blue orbs, or a shotgun blast of flaming red skulls. You would not believe how happy it makes me to type that last one. Each color also has a powered-up variant assigned to L1 – green fires a concussive round, blue lobs a sort of grenade, and red creates a column of flaming skulls in front of you. In the late game, you can hit lingering power projectiles with your regular shots to flare up a tornado that tosses enemy ragdolls around at high speeds, create a black hole that kills pretty much everything near it, or ignite a blazing inferno that gives everything it burns the plague. In case I hadn’t made it clear, red is the color of awesome. 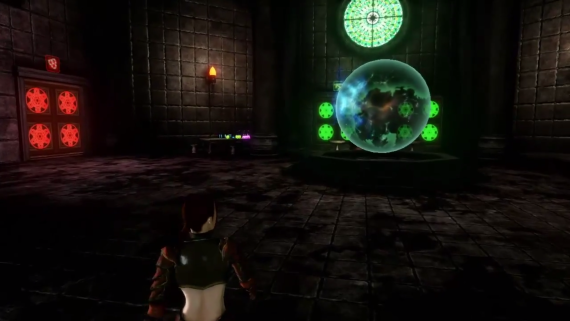 Your basic attacks are just the beginning though. Magus is a god, after all, (albeit a stiff, ugly, perpetually Crip-walking one) and he has access to a delicious smorgasbord of poorly-implemented magical powers. Red magic lets him spread disease, possess enemies, or raise the dead to fight for him – which half the time involves their standing perfectly still while enemies attack them, because, I don’t know, I guess being brought back from the dead is stressful or something. Though it looks the coolest, Red ends up with the least exciting spells overall. It does, however, have the undead explosion ability, which is exactly as cool as it sounds.

Blue magic allows Magus to fly, teleport, and create portals, and considering the enemy AI can barely handle circle-strafing, these mobility options wreak absolute havoc. Offensive blue spells bend space to your will, allowing you to rain shooting stars on your foes (even indoors), or suffocate them by creating a vacuum bubble around their heads. That’s right, Magus lets you force-choke a bitch. And it even works on bosses! This is what The Force Unleashed should have been. 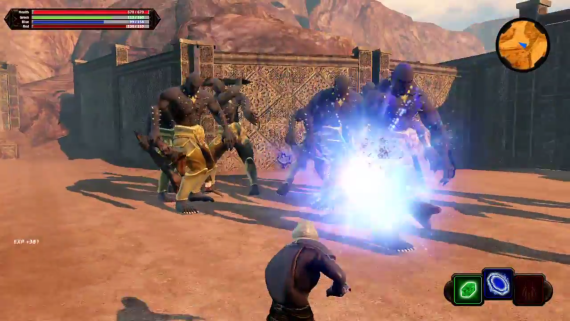 Green magic ended up being my favorite to use, mainly owing to two spells. The first green spell you get shifts every enemy around Magus into hilarious slo-mo, letting you casually saunter around their stiffly-animated, over-telegraphed attacks. What makes it absolutely brilliant is that they stay slowed when they ragdoll and try to get up, meaning most bosses end up looking like a turtle trying to roll off of its back. Toward the mid-game you learn to shrink yourself, making you almost impossible to hit. It has the added bonus of speeding up your animations so that you look like something out of Benny Hill. With the titan strength spell to quadruple your size, Magus basically lets you be Ant Man, while also letting you be Darth Vader and Iron Man. I’m not making a word of this up.

Even with all those different attacks, Magus would get awful boring awful quickly if you were just mowing down the same enemies over and over. Fortunately Black Tower have gone to great lengths to keep things fresh from level to level. Not in terms of design, mind you; the enemies all behave exactly the same and the maps all feel like rejects from Dynasty Warriors. Where Magus shakes things up is in terms of aesthetics, but those aesthetics are works of sheer moronic genius. You encounter a dungeon level, a mine level, a desert level, a beach level, an ice level, and a volcano level, all delightfully presented as though the designers thought they were making the most original thing in the world. 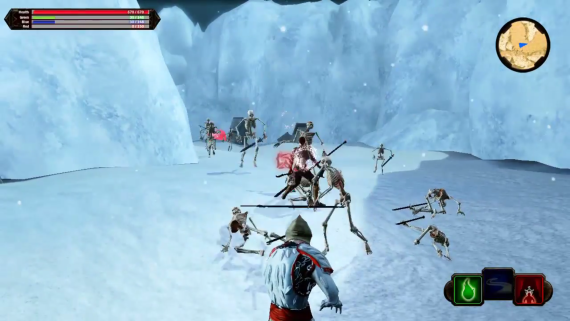 The Unreal Engine is something of a technical marvel. In skilled hands it can be used to craft gorgeous, intricately detailed levels bathed in gorgeous real-time lighting. The hands at Black Tower and Aksys are anything but skilled. As a former game design student, I have seen my share of shoddy UDK levels, and most of them could put Magus to shame. With its poorly tiled terrain, constant texture pop-in, and wholly inconsistent level of fidelity (you’ll see highly detailed rocks next to ones that look like they were textured with a 32×32 JPEG), Magus is one of the most beautifully ugly games I’ve ever laid eyes on.

Most levels pit you against the same knight 50 or so times, but each also has its own unique enemy variant. On the beach you’ll fight pirate dragon men, while in the icy burial grounds you’ll face walking skeletons who yell in squeaky Skeletor voices. In the mines, you fight unicorns; unicorns that are animated with human bone rigs and wield pickaxes. No, I’m still not making any of this up. The unicorns make exactly three noises. When they’re attacking, they alternate between some of the worst fake horse whinnies you’ve ever heard and whispering “kill” in what’s obviously supposed to be a spooky voice, but isn’t. When they die and their ragdolls are tossed about, they scream exactly like regular guys. I challenge you to play this game without grinning like a maniac. 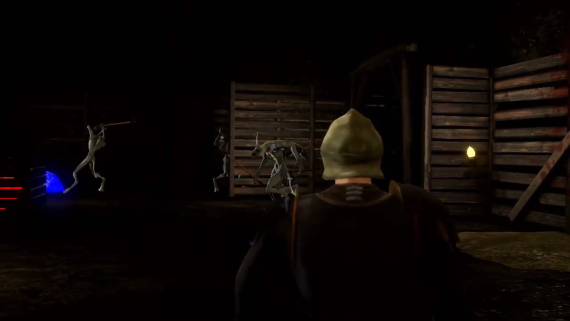 This is only enhanced by the AI behavior. These foes will always be doing pretty much exactly what they shouldn’t, but what’s truly impressive is all the innovative ways of failing they come up with on the fly. Sometimes they’ll charge single-file toward your machine gun magic, letting you mow them down without even aiming. Often, they’ll swarm around your (apparently invincible) AI companion instead of you, allowing you to pick them off at your leisure. Once, in the middle of a boss fight, the boss ran up to a torch on the other side of the room and began jumping up and down for a solid minute. You have not known true joy, though, until you’ve seen a unicorn charge toward you, whinnying like a maniac, only to inexplicably moon walk five feet to the left when you try to shoot it. This, the game believes, constitutes dodging.

The game is able to be such a comedic goldmine precisely because it’s so easy. It might (and by “might” I mean “definitely will”) break in frightening, inexplicable ways, but never in frustrating ways. If you die, it’s always your own fault (the only death in my playthrough came when I jumped in a spike pit to see what would happen). It’s easy to get turned around in the more barren levels, what with all the circle strafing, but you always have a map that’ll point you in the right direction. You’ll fight dozens of enemies at a time, and the frame rate chugs like nuts when you start tossing projectiles at bigger crowds, but to its credit, the game never once crashed on me. Because Magus never unduly stalls your progress, you’ll find yourself enjoying every bit of craziness and even anticipating the surprises to come. 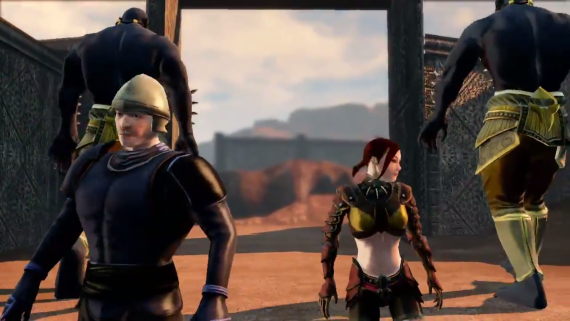 What really helps to sell the whole package, though, is the game’s writing. In every exchange of dialogue, you can feel how serious Richie Casper (the game’s writer) is about this story he’s telling. He genuinely believes that he’s built an original fantasy concept based on compelling ideas, and it’s adorable. I could go on for days about the awkward dialogue, the exposition landslides, the blanket of casual sexism that the game lays on to make itself seem “dark” – but I won’t. Instead, I’m going to share with you a bit of dialogue from one of the game’s bosses. For context, the boss in question is a fat, bald, 10 foot tall mine foreman with poorly-textured gems embedded in his skin:

“Keep it up, laughing boy. You won’t be so jovial when I’m butchering you alive and feeding your arms and legs to my unicorns.”

I’d like you to take a moment and just drink that in. Re-read it a few times if you have to. A real human being, who must have at some point in life conversed with other real human beings, came up with that. When tasked with concocting dialogue to make a person sound menacing, this is what they wrote. The events in their lives up to this point lead them to believe that THAT is something a person could say to another person, not just with a straight face, but as a real threat that they honestly mean. That was, for real, somebody’s job.

And here you were thinking life had meaning. 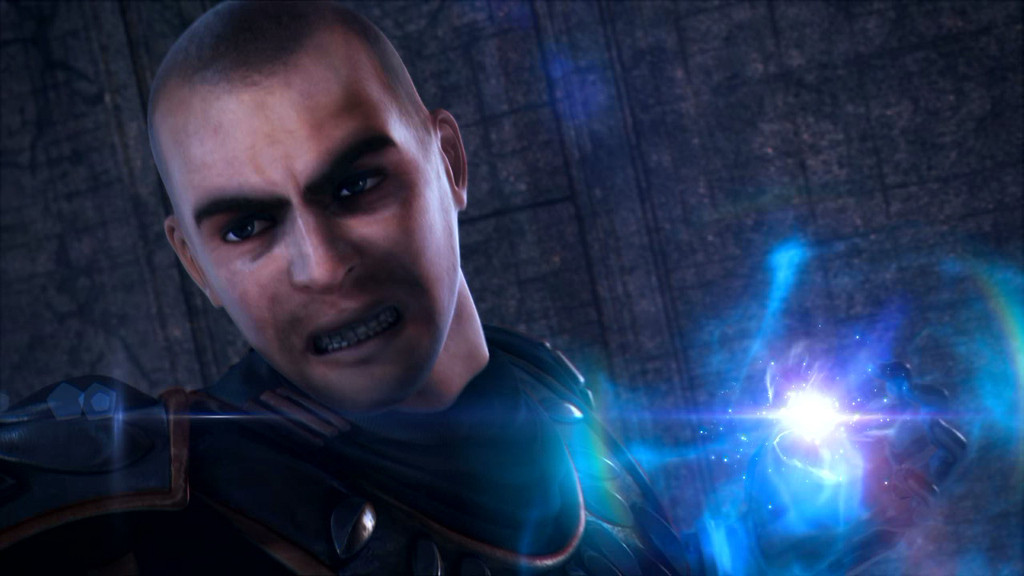 With a great game – Bravely Default, for instance – all of the systems and mechanics interlock perfectly to create a whole much greater than the sum of its parts. In much the same way, Magus’ myriad failings play off of each other brilliantly, turning what could have been a train wreck into a roller coaster of incredible, organic hilarity. It is a perfect storm of terrible ideas and botched execution, endlessly enjoyable in spite of itself. Were you to play it with your friends, perhaps as part of some raucous drinking game, the laughter might well kill you before the alcohol. Like Birdemic or The Room, Magus is so terrible that it can only be called a masterpiece. The critic in me is forced to give it our lowest possible score, but that comes with my highest possible recommendation.