Somewhere out there is a giant tower packed with hundreds of ways to die. Gun emplacements spew dense walls of deadly projectiles, death-bots of various shapes and sizes float through the air and either charge at you in kamikaze attacks of throw endless streams of bullets your way, and even the halls and giant rooms seem downright unfriendly. (Except for the hugbots, of course, who only want to shower you with love and adoration.) The tower is a strange and unpredictable place, making it the perfect arena to go sightseeing with your favorite gun.

Tower of Guns is a semi-randomized high speed FPS in the classic Quake style, mixed with a healthy dose of roguelike design. You’ve got one life to get from the bottom to the top of the tower, and each run is a new experience even when you gain some familiarity with the rooms. At game’s start you pick a gun and a single perk, then scavenge what you can along the way in an attempt to be powerful enough to survive the upper floors. One of the biggest problems, though, is that the order of the rooms, the enemy layout, and the powerups you find along the way are all randomized. 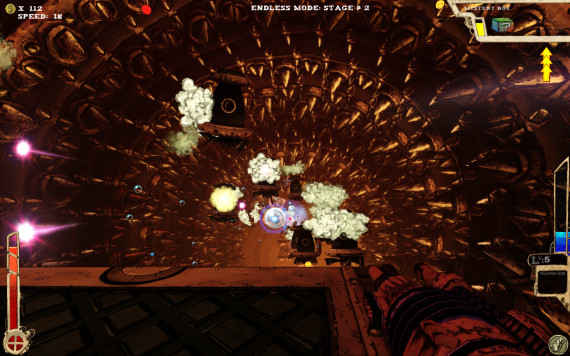 In addition to making Tower of Guns fantastically replayable, the randomization does its usual job of making every room and encounter a reaction waiting to happen. Knowing that there’s a secret behind a false wall doesn’t mean that the secret will be worth chasing. It might be three coins, it might be a power-up shop selling something you can’t afford yet, or it might be a giant pile of gun-enhancing blue cards. From an enemy perspective, you might get a mix of buzzsaw-shooting turrets along the walls and rapidly-darting gunbots floating through the air, or it could just as well be a handful of spiked ball-shooting big-mouthed turrets and a few bombots to chase you around and explode in your face. A room that in one run has a few enemies hanging out might have the walls packed with guns throwing a giant barrage of shells your way the next.

The result is an FPS that’s about reflexes and adaptation. You go in with a gun and perk of your choosing, with more options becoming available at the game’s start as various goals are met. For guns you’ve got your basic zappy-pistol and another that shoots ricocheting saw blades, and quickly add a shotgun, rapid-fire pulse rifle, short range spiked-ball launcher, and a several others. Perks start off with the incredibly-helpful triple jump, expand to include immunity to various types of damage (fall, environmental, self-inflicted), and some other odds and ends. The only real complaint I can give the game is how hard it is to pass up the triple jump, because it makes exploring the arenas and finding much-needed power-ups not so much easier as actually possible to do. Still, mixing and matching guns and perks is a nice start for keeping every game feeling new, but the real variety in abilities comes in what you can scavenge along the way.

Most enemies drop a goodie or two, usually in the form of health, gun experience, or coins. The guns start off at level one and can get far deadlier as they level up to 5 (or 6 with the right perk), but power is more than just damage. You can also find speed, extra jumping power (quintuple jump? Sure, if you’re lucky), armor, damage, luck, gun mods, and even very rarely new weapons that aren’t available in the gun selection screen. The skills you pick up along the way determine the best play style, and it’s important to be able to adapt on the fly. A few speed boosts and the precision gun mod turn the shotgun’s tactics from crowd control into fast twitch-sniping, while the fire mod means the pulse rifle can pepper the walls with imprecise firepower that leaves behind a burning red dome of pain for anything it touches. Tower of Guns is already a fantastically solid bit of FPS shooting before lucking into a crazy-powerful gun, but with the right perks and mods you can feel like a gun-god even while the later levels are still fully capable of kicking your teeth in. 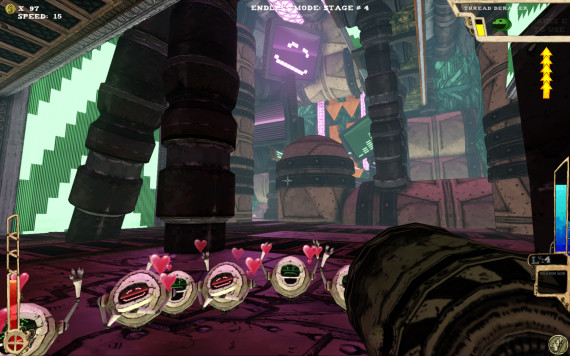 While there’s plenty of humor throughout the game, and the hand-drawn textures make even the most gear-filled and lava-soaked areas look pleasantly quirky, Tower of Guns is hard. Surviving the high density bullet barrages of the final areas requires fast shooting and full use of all the power-ups you’ve found along the way. Huge guns firing 30 foot tall bullets, floating tanks throwing out walls of firepower, flamethrowers and homing plasma dispensers, and even floating teleporting laser platforms only have one target in their sights, and that’s you. You can’t get too comfortable with the level layout because the rooms are randomized, so you’ll never see more than a small percentage of the available areas in a single run-through. The best you can do is react as fast as you can, tossing back as much firepower as is sent your way while grabbing every power-up you can. Tower of Guns is an ass-kicking bullet-hell FPS arcade-style action, loaded with cool toys and unpredictable situations, and one of the most purely fun shooters I’ve seen in a very long time.