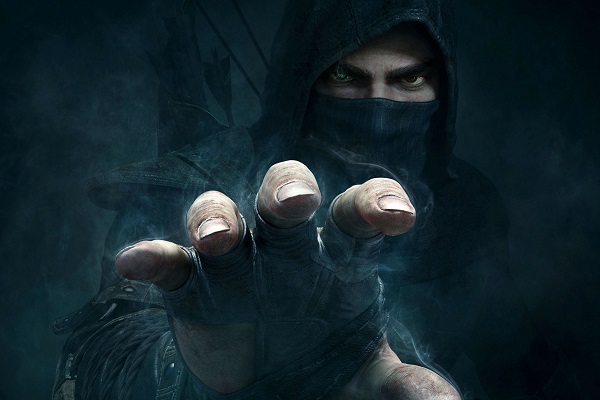 There’s a moment in Thief where you’re traversing the rooftops. You enter and exit an apartment silently, making your way across a courtyard littered with guards. You maneuver the environment, gliding with the darkness from shadow to shadow, and just as you find yourself completely immersed in the experience, the tutorial is over. Thief begins on an impressive note that, despite its best efforts, it fails to ever reach again. In its 15 or so hour campaign, you’ll find yourself on similar rooftops, swooping through the night behind unsuspecting watchmen, but it never quite feels the same. Something is missing.

Thief takes place in the “The City,” the aptly titled hub for various quests, apartments and seemingly endless passageways. Indeed, it’s cluttered with homes to rob, streets to wander, guards to distract and treasures to uncover — but its complexity inhibits any sense of freedom. The entirety of the hub is fragmented, separated into smaller slices of city with quick-but-frustrating loading screens to remind you of its limits. The City has more in common with the innards of a castle, and despite an abundance of auspicious spaces for the utilization of both stealth mechanics and bow-combat, the lack of cohesion is difficult to overcome.

The archaic design hinders immersion, reminding you too often of its dead-ends and pointless exploration. When played through as intended by the developer, levels can often be tight, exciting, and allow for some intense encounters, be they stealthy or otherwise. There’s no veering from the path, however. When you do, the pieced-together pathways and limited approach to traversal stunt the enjoyment. The City impedes any true exploration, offering instead a mismatched playground of confusing corridors and confounding layers. 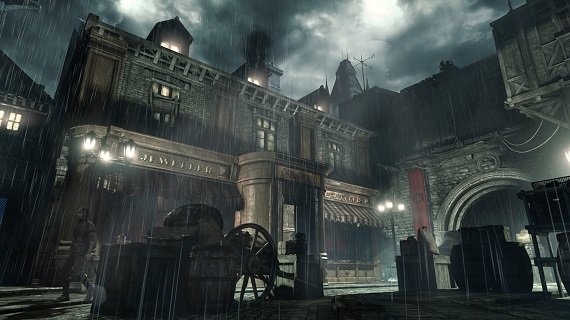 In a game that, by all accounts, should be a testament of immersion, that very lack of freedom could only be justified by a meaningful narrative. Much like The City, however, the story leaves much to be desired. Various supernatural elements, disgruntled clientele and overtones of boring are delivered through serviceable chunks of dialog. Much of the story’s “charm” relies on the player’s willingness to suspend their disbelief, accept the mystical guff and engage in the narrative as if it were law — an impossible feat when the entire story is an exercise in keeping from falling asleep. There’s a plague-like disease, a questionable relationship, some risible mysticism and a bunch of nameless faces that play little more than the role of a gear, helping to spin the messy quest  to its unsatisfying conclusion.

Thankfully, the side-quests don’t always follow such an unfortunate route. There’s certainly a scarcity of to-to’s that make for a better time than downing a bottle of Ambien, but the few that offer more than a constant stream of loot are worth exploring. Searching behind paintings for a concealed safe, tinkering with puzzles, and toying with unsuspecting guards is always enjoyable.

It’s best to simply ignore the story altogether, though, and focus on Thief’s primary selling point: stealth. While seemingly simple in execution, and certainly shattered by the often egregious AI, Thief remains the slow-burning candle it always was. During the main story, you’ll often find yourself surrounded by guards, candles, torches, crates, shadows and various pathways — even broken glass can force you out of hiding. How you approach the situation is entirely up to you, and it’s those moments that help forgive Thief of its flaws.

The options, too, can be fiddled with ad nauseam, and offer an impressively wide array of tweaks. The Focus ability, which allows for you to pinpoint interactive objects in the environment, can be removed; the combat can be made trickier, and death a true fatality. There’s a ridiculous amount of freedom imposed on the player, and while slightly overwhelming, it’s perhaps Thief’s greatest attribute. Those wondering whether Thief is as difficult as past iterations should know that while it’s technically a much easier romp, the options allow for even the naggiest of fanatics to fine-tune an adventure that borders on impossible. 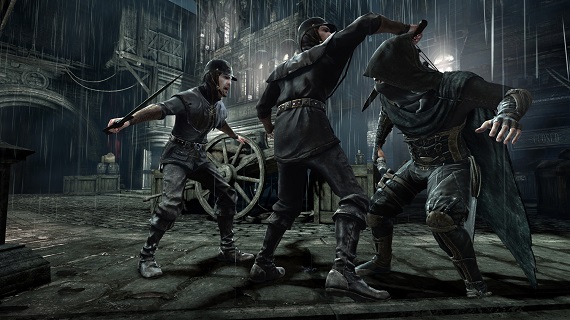 Combat, on the other hand, hasn’t been treated to the same level of polish. On paper, it makes sense that your only weapon is a bunt that requires far too many hits to knock out an opponent. In action, however, it’s difficult to imagine a grown man refusing to murder a guard in close range, but entirely willing to fill the city with orphans and windows with a bow and a handful of fire-arrows. It’s not as if the bouts are particularly tricky — at least not versus fewer than 3 guards. It’s a matter of logic. Mechanically, the combat is also quite clunky. It’s a nice inclusion for those that simply can’t manage to stealthily navigate a certain area, but it’s best avoided entirely. Thief isn’t a game about fighting guards, though. It’s a game about stealing their pouch of gold and disappearing into the shadows.

It’s strange, then, that a game revolving around stealing can boast such a one dimensional system. I did enjoy that every object I snatched converted to gold automatically, as this provided a sense of financial progression without trekking back and fourth between loading screens. Unfortunately, most drawers, cabinets, desks and countertops are empty — usually with a single piece of cutlery or silver candlestick to grab. The emptiness of every apartment makes the random assortment of valuables strange. Why would these people keep a pricey heirloom on a dusty desk in the basement? Thief presents a world of poverty and struggle; such an inconsistency is quite shattering.

However, Thief’s greatest downfall is its AI — which is not, by any means, intuitive. Guards will respond to a bottle tossed across the room, and a fire doused by a water arrow will send them rushing to investigate, but their search rarely lasts a realistic duration of time — even by video game standards. They often return to the same routine as if nothing happened only moments after the surprising disappearance of every flame in their camp. I don’t know about you, but if fires were being mysteriously extinguished around me, I wouldn’t head back to my chair and doze off. There’s also the matter of repetitive dialog, and guards being oblivious to my whereabouts during an in-your-face encounter more often than acceptable.

There’s no enemy or NPC variety in Thief, either. There’s a bowman and swordsman respectively, and both do a fine job of reminding you of their position by appearing exactly the same during every point inthe game. Even visual variety would have done Thief splendid, as the overtones of gray and brown start to weigh on your enjoyment after the third or fourth hour. The city itself, while also a victim of dark tones, can be quite striking. There are plenty of interesting views, and if it weren’t so segmented, it could have very well been a fine place to explore. Unfortunately, Thief ranges from dull to astounding in the looks department. The environments, layout, characters and art-style are uninspired, boring and muddy. It’s the lighting, the realistic fog-effects and the overall polish that steal the show. The technical end isn’t quite up to par, though. While I encountered few bugs on my trip through The City, the frame-rate was devastating at times, dipping numerically into jail bait territory. 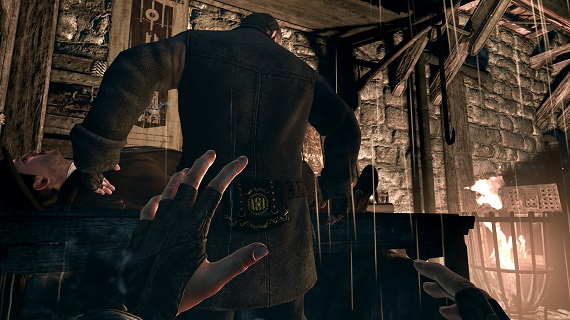 In spite of the preconceived notions and occasionally frustrating execution, Thief provides an intriguing and occasionally exciting foray into the shadows. It’s an experience that ranges from exceptional to entertaining — despite being as closeted as it is, and there’s enough to justify delving in if you can ignore a majority of its elements in favor of its superb stealth. Perhaps what is most disappointing is that Thief does its best to make you believe that there’s more to it beneath the surface, and you’ll drudge through much of its mess with that glint of hope. That isn’t the case, though, as it’s very much a “take it as it is” experience, and if you’re willing to do so you’ll find that it just might steal some time from your weekend.