Pokémon Battle Trozei! just released in Japan and as usual, they get all the cool stuff. To commemorate the release, a pair of special 3DS systems are being made available to Japanese Pokémon Daisuki Club members. The black 3DS features every Pokémon version mascot from Red and Blue to X and Y. The white one has several sprites including many legendary Pokémon, starters and some from the latest game.

However, in order to receive these, club members have to watch special episodes and count how many Trozei icons appear, then add them all up and enter. Guess it’s too much work for North Americans. There’s no sign of these coming to North America but we can only hope. At least we’ll be able to play Pokémon Battle Trozei! when it’s released in a few days. 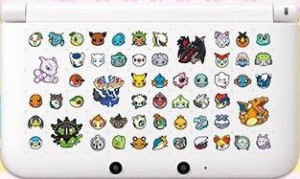