The swap is dark, moist and stinky, and that’s just the way its resident witch loves it. Metallia isn’t bothered by being confined to the swamp’s borders because really, why would she want to be anywhere else? Plus, if she turns everything to swamp then it’s not like the limitation is going to be much of a problem. Not only does Metallia get to transform the world but she also has the pleasure of crushing and tormenting all the idiots in her path. There’s simply no downside here.

Which isn’t to say it’s going to be easy, of course. Being confined to the swamp means transforming the world will need to be done by surrogate, and that’s where the Hundred Knight comes in. The Hundred Knight is a cute little guy with almost unlimited combat potential, as innocent as Metallia is evil and quiet as his master is verbose. Metallia gives the orders and sets the goals but the Hundred Knight carries them out, wandering the surrounding lands and smacking around the monsters and beasts that get between him and the pillars that, when activated, put the land under the witch’s control. 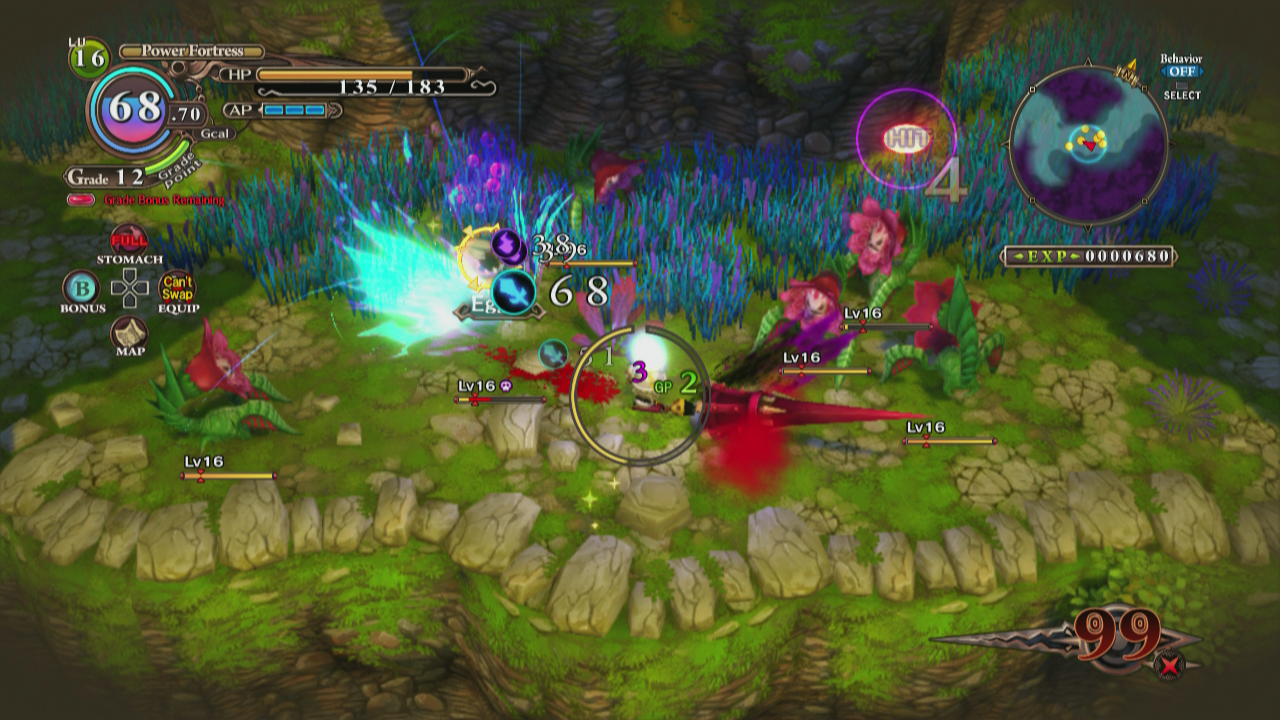 The Witch and the Hundred Knight is an odd little action-RPG in that you’re playing as the minion of evil. It’s made obvious early on that Metallia isn’t a cartoon baddie, despite her anime stylings, when she turns a rival witch into a rat and summons a small pack of rats to rape her. (Which we did mention in the preview, but this kind of event is more than a bit trigger-y for some people so it’s worth repeating.) The downside is that this is really wrong, to the point that I considered backing out of the review entirely because, oopsie, review disc accidentally got set on fire, how did that happen? The upside, if you can call it that, is that morbid curiosity is fairly compelling. If the story is willing to go that far that early, playing the scene as very dark comedy, where else will it go? All over the place, as it turns out, as Metallia heads out into the world and things get rapidly out of hand.

While Metallia and her schemes dominates the story, the Hundred Knight is in charge of the actual gameplay. The basic flow of the game is he starts at the beginning of an area, beats on any monsters in the way as they attack by the truckload, watch the occasional cut scene, open up the checkpoints along the way, and eventually fight a boss battle at the end. It’s fairly standard stuff, but the classic action-RPG progression of “get more stuff to kill tougher monsters who drop better stuff” is as reliable as always. The combat, on the other hand, is mostly good with some unfortunate design decisions dragging it down. 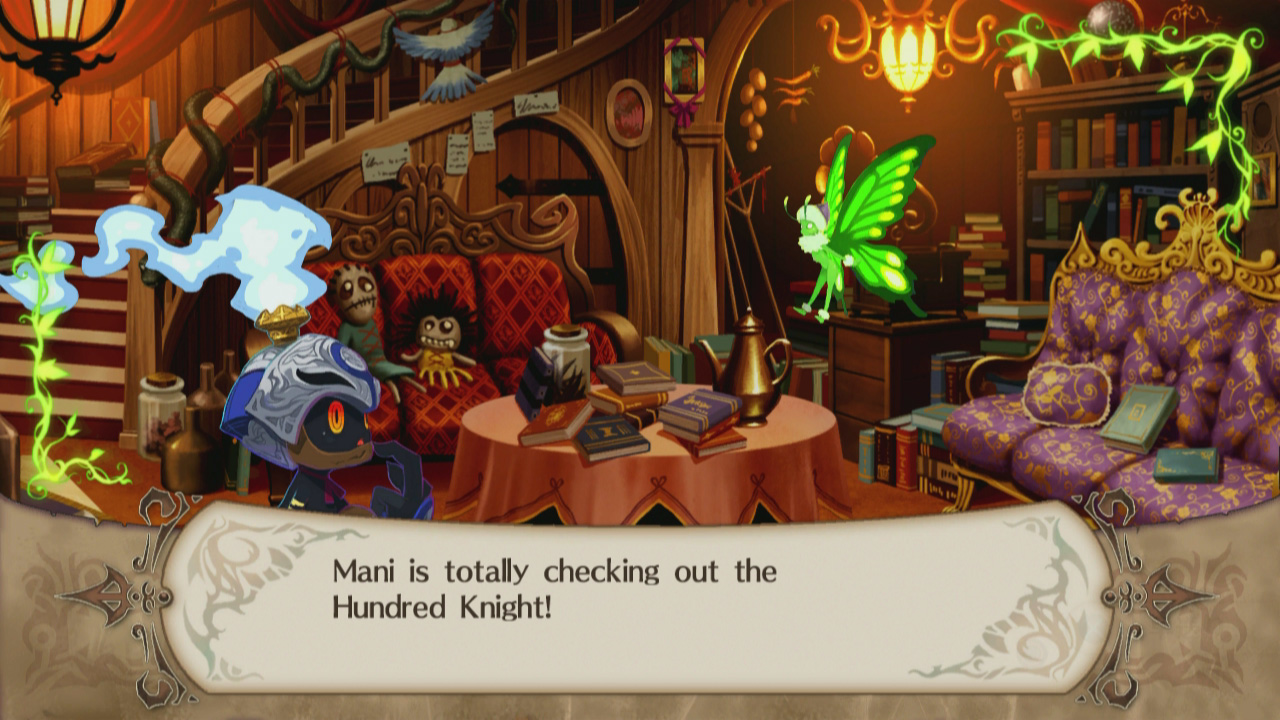 The Hundred Knight is a pretty standard action-RPG fighter with a few twists to set him apart. The knight can equip five weapons, breaking them out one after the other in a multi-hit combo, and certain enemies are susceptible to different weapon types. A magic user will be protected against the magic that staves throw out but easily damaged by physical hits. Alternately, an enemy armed with a blunt attack is generally strong against hammers but might be weak against swords, with standard resistances against spears, pikes, and magic staves. In theory this means that you can switch up the weapon loadout in an area to tailor it to the weaknesses of its monsters, but in practice it’s more likely you’ll have a collection of strong weapons, one of each just to be thorough, because hitting the equipment screen every few monsters is a pain. Changing the weapon order and creating a nice combo flow is always good fun, and the action moves along at a nice pace, but once you’ve got a combo you’re happy with there’s no reason to change it until you find better equipment. A little bit of leveling up and the weapon affinity becomes easy to compensate for.

Leveling up is done in multiple ways as you go. The knight learns different facets as he goes along, which are basically different classes, and they level up independently. Wonder Knight is the starting class, average in all things, and you’ll get magic, speed, and power classes as well. While they’re awarded slowly through the game, playing catch-up with a weak new class when Wonder Knight is high level only takes a bit of grinding thanks to being able to designate a class as primary, which lets it get most of the experience from an area. 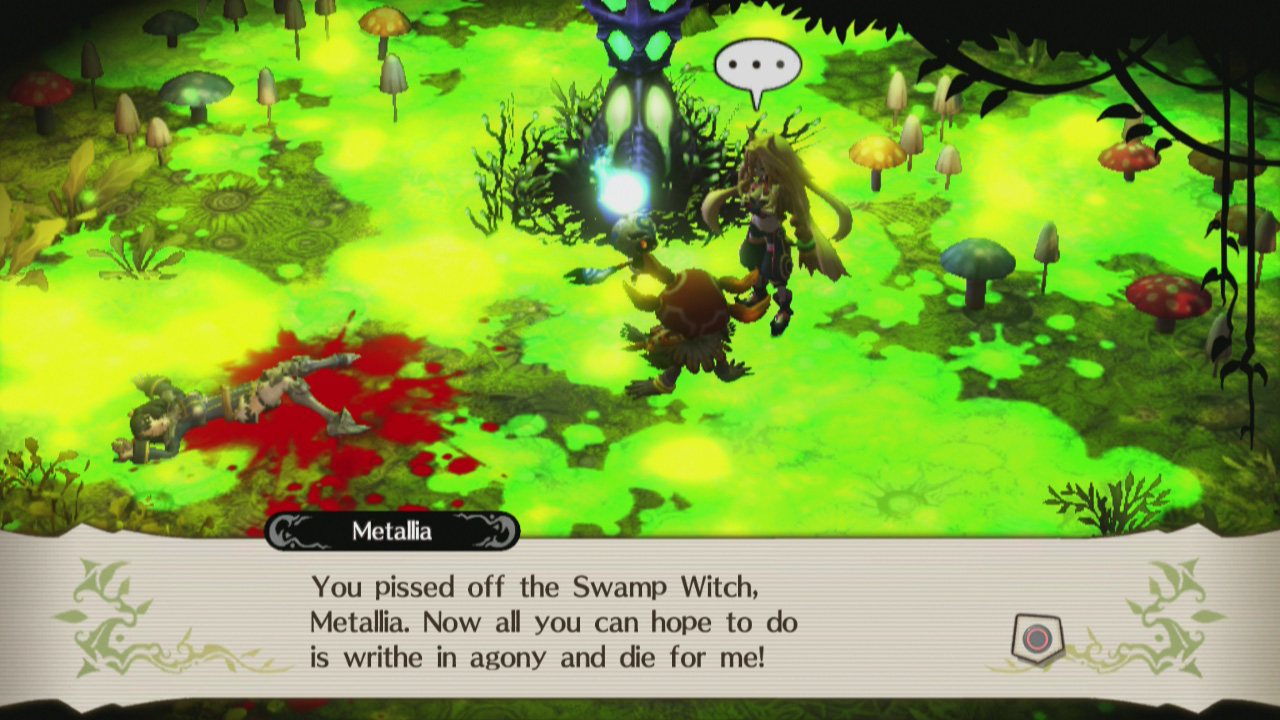 The weapons also level up as they’re used, with potential being dictated by rarity. A Blue Sword (Common) might have a higher attack at level 1 than Blue Sword (Epic), but the common sword can only level up to 10 while epic can go all the way to 50, making that two point difference in starting power seem far less a problem. It does make it tricky to upgrade, though, when a new weapon with great long-term potential starts off so much weaker, but you can always spend mana back at home base on a manual upgrade. Or you can hit a whole lot of monsters in the face really hard, because that’s what weapons are for.

The third level up (as you might have noticed, there’s a ton of interlocking systems in the game) is a temporary one based on earning Grade points. These are generally earned by beating on enemies, and are spent at the checkpoints throughout the level. One grade is spent on a bonus point in the various stats, extra GCal, or more Bonus Points. Bonus points grant extra goodies at the map’s end, but hanging around forever to earn the points is made harder by the continual decrease in giga calories. When the knight is away from the witch, exploring and pulling out attack combos in combat, he gets hungry, and when the calorie count hits zero he’s weakened to a state of near-uselessness. Avoiding is important, and this is done by using scarce food items, spending a grade point for a 10% increase in GCal, or eating enemies. Most enemies, when their health gets low, can be consumed for a calorie boost, but the knight only has so much space in his stomach and its best reserved for items found in the field, most of which aren’t officially added to inventory until you leave the level via checkpoint. Find a super-rare sword and the knight’s stomach is filled with junk from consuming too many enemies? It’s going to have to get left behind, which always hurts.

A little pain from errors in judgement is all part of gaming, but there’s other aspects of The Witch and the Hundred Knight that aren’t so easily overlooked. The art design in particular is good on paper, but in practice it tends to get in the way of actually seeing the game. Trees loom over the field and don’t go transparent, blocking enemies and the knight in a way that simply shouldn’t happen. Additionally, enemies get lost on the field, blending into the backgrounds and making it nearly impossible to read their action. Their health bar is always visible, so you can point the knight at it and combo away. Setting up a well-timed dodge, on the other hand, which earns a few seconds of slow-mo and invincibility for major counterattack action, is much harder when the enemy is an orange blob on a brown background. The same also holds true for the knight, and eventually he turns from being a cute little warrior into a white ball of flame because that’s much easier to pick out among all the other things on screen that need your attention. 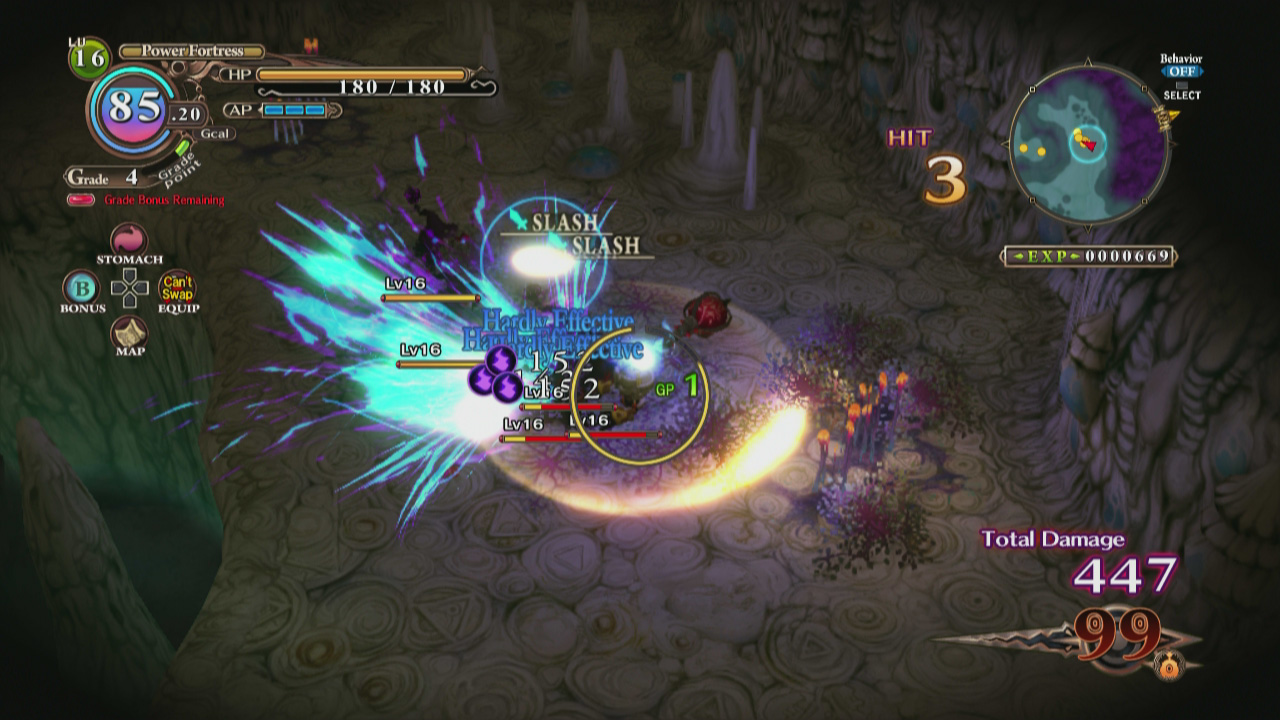 The give and take of the design holds true for most of the game. The Totchka are summoned helpers and fun to use, but a clunky interface makes summoning them (and using a few other secondary abilities) a pain. The tone of the story is hard to take, with Metallia doing most of the talking while being completely unlikeable and, even when you get used to her, talking far too long. Even with its problems, though, when the action gets moving the game manages to overcome its issue and become surprisingly playable. It’s hard to fully recommend a game when so much of it is waved aside with “you’ll get used to it,” but once you fall into The Witch and the Hundred Knight‘s peculiar tempo, it’s not a bad way to dominate the world.