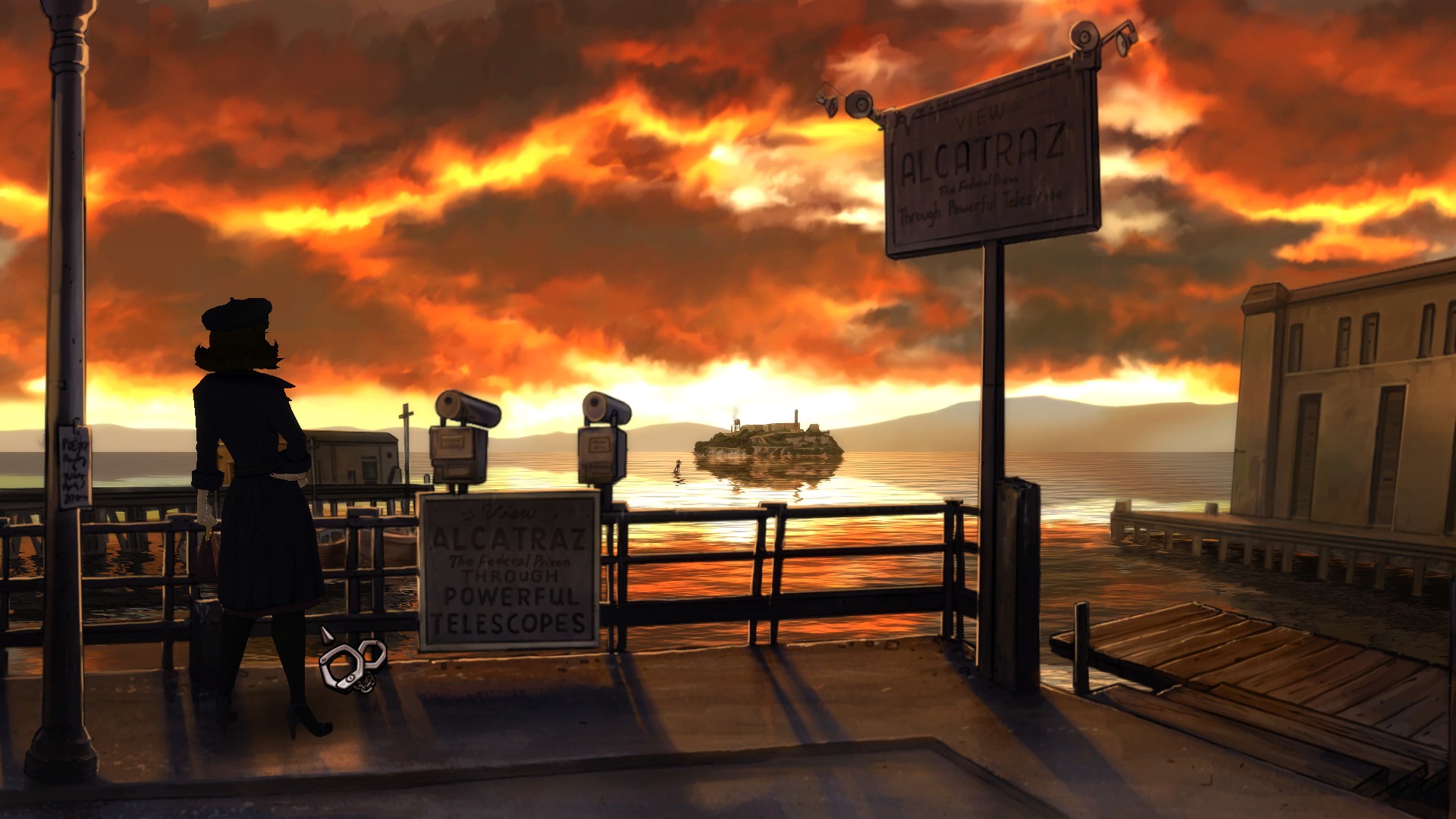 I’ve always thought that a prison, used right, would make for a great game setting. The cramped quarters, arbitrary rules, and microcosmic social and political structures make for unique gameplay dynamics. Staging a prison break, or just trying to survive on the inside could form the basis of a truly compelling stealth or horror title. A few notable games have taken a crack at the setting, but The Suffering was more supernatural horror than I’d have liked, Prison Architect and Prison Tycoon put you on the other side of the bars, and the less said about Prison Break: The Conspiracy, the better.

In theory, 1954: Alcatraz should have slaked my thirst (in more ways than one, seeing as it’s Daedalic’s first adventure written by a native English-speaker). The game stars Joe, an ex-military convict orchestrating an escape from America’s most infamous correctional facility. He has to smuggle and barter his way out of captivity, avoid rousing the guards’ suspicions, and use improvised combat gear to take down a psychotic inmate who’s out for his blood. Meanwhile, Joe’s beatnik wife Christine has to track down the money he stashed on the outside and secure their way out of the country. A point and click might not be the best medium for that concept, but in my books it’s still a recipe for success.

Unfortunately, a good recipe is nothing without a good cook. Stumbling at almost every turn, Alcatraz is ugly, frustrating, and worst of all, interminably dull. Though based on some interesting ideas, poor execution leaves the story middling at best. The game’s sole saving grace is its bumpin’ jazz soundtrack, which perfectly complements the beatnik aesthetic and gives otherwise drab scenes a bit of dramatic punch.

As I said, there are some interesting ideas at play here. Though it’s clear Joe and Christine love each other, their relationship is (if you’ll pardon the turn of phrase) on the rocks. Joe’s being in prison naturally puts a strain on things, and it doesn’t help that he said he was cheating on her in an attempt to establish an alibi. Both have opportunities to be unfaithful throughout the game, and Christine can ultimately decide to split with the money and leave Joe to rot. It’s an intriguing dynamic, but it’s handled with zero subtlety. There are only a few very obvious choices that affect the game’s outcome, and everything still comes down to a single melodramatic decision.

What I do like about the story is that neither Christine nor Joe is a particularly good person. Both steal, coerce, and even kill (criminals and law enforcement alike) on the way to their reunion – one that’s suitably bittersweet for a work of beat literature. They touch a lot of people’s lives in some less-than-nice ways, and there’s potential here for a solid dark love story. Unfortunately, nobody they meet is given more than a few lines worth of personality, and while those lines are decently written and acted, almost everything ends up ringing hollow. Aside from our leads, only the germaphobic mobster mickey and the cuckolded prison hack Mason get any real development.

On a design level, Alcatraz commits the adventure game sin of arbitrary puzzle gating. It can be entirely obvious how you need to proceed, but the game will make certain areas inaccessible (because X character is “busy”) until you complete entirely unrelated tasks, and lock off certain conversation trees until you do some unnecessary pixel hunting. In an early example, you have to get an herb for some soup from a Chinese spice drawer, and you need to translate the correct label using a menu in a restaurant. Unfortunately, only one menu out of the eight that are lying around that restaurant is actually interactive, while the rest are merely set decoration. Having two protagonists could alleviate this tedium, but you often have to make progress with one character before the other can proceed.

Oh, and there’s also point-and-click combat. Anyone who’s played Full Throttle knows that’s all I need to say about that.

It’s no secret that I’m not a fan of 3D graphics in adventure games, but Alcatraz takes visual inconsistency to another level. The backgrounds are hand-drawn – and drawn quite well, with great shading and dramatic camera angles – but the characters that populate them are some of the ugliest, most wooden-looking models I’ve ever seen. They’re blocky, angular, and rendered with a cel-shader that somehow makes them pop out more from the sets. Half of the rigs can’t close their mouths properly, shading glitches abound, and some characters have accessories like watches painted onto their skin.

I can think of few games that look this sloppy and amateurish, and that’s before these dead-eyed abominations start to move. Most characters have exactly two poses, with maybe one animation to show them handing off items, and absolutely none of them looks remotely right. Few characters even have walk cycles, but those that do… oh boy are they terrible. One character, who I think is supposed to have a beatnik swagger, walks like he’s trying to limbo with a dislocated hip.

When you mix this with the awful, poorly-timed foley work, it becomes almost comical. Sound effects so rarely match the action on-screen that when they do I’m convinced it’s more a case of broken clocks being right than actual designer competence. The absolute worst offender, though, is the lip-syncing. Every character only has one awkward mouth-flapping animation to their name, and the programmers couldn’t even match those up right. More than once I saw characters speaking other characters’ lines, and that was when they bothered to move at all.

Though it’s got many of the building blocks for my ideal prison game (is that a weird thing to have?), 1954: Alcatraz is a disappointment. A few great ideas are drowned in a torrent of design flaws and technical problems. I wish there were something interesting to say about this game’s failures, but they just amount to plain, old-fashioned bad craftsmanship. Still, at least Daedalic finally has an adventure to their name with a competent (though by no means great) English script.