A lot of folks were surprised by Child of Light, remarking on how odd it is for Ubisoft to be releasing a JRPG. The thing is, it’s not odd at all. Ubisoft has been in the business of localizing RPGs since the Dreamcast days, starting with Grandia 2. It’s a fairly sporadic business, and they only seem to pick up titles that would be rejected by the likes of Atlus and Square, but it’s not as if they’re complete newbies. Today, in honor of their home-grown JRPG’s impending release, we’re gonna delve into their history with the genre.

While Ubisoft published the original Grandia in Europe, the English translation of the PS1 classic was handled by Sony. It was only with the sequel that Ubisoft took the reins. Grandia 2 has the honor of being the second-best JRPG on Dreamcast, and when your competition is one of the best JRPGs ever made, that really says something. While the game mostly stands on the strength of its combat system, art, and music (by Ace Attorney composer Noriyuki Iwadare), Ubisoft’s inaugural localization effort earned some praise. The English writing was breezy and entertaining, a good fit for the more light-hearted story of the sequel. Ubisoft also oversaw a western-exclusive PC port of the game, which is rare even from the bigger localization teams. 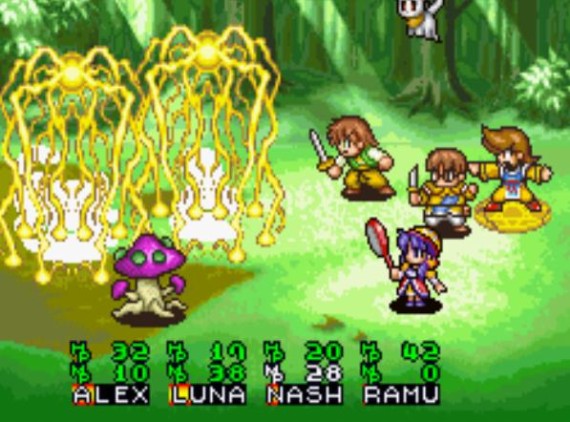 This game is an interesting beast, a ground-up reimagining of Lunar: Silver Star made with the GBA in mind. Lunar Legend takes characters and plot points from the original game and condenses them for portable play. While it’s missing a lot of the more bombastic elements that made the PS1 release so compelling (like animated cutscenes and mountains of swag), the pacing feels a little tighter. Ubisoft’s translation was a little more literal than Working Design’s work on previous games in the series, but kept the light tone fans expected. It was, all told, a solid game. 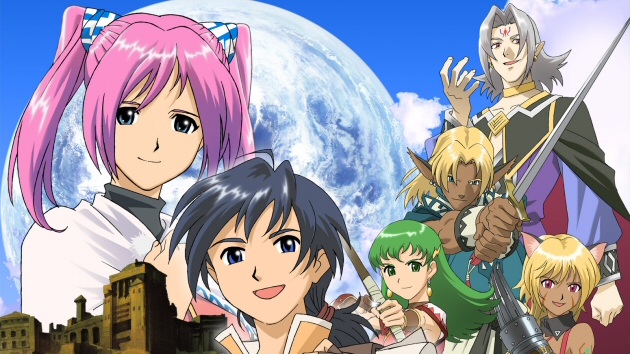 The Lunar series’ third portable outing didn’t do so well. The designers attempted to streamline turn-based combat, but all their bizarre, unpolished battle system did was frustrate players. The baffling inability to select attack targets drained the game of all tactical depth. Compared to the strategy-laden combat of the main series, it was a severe letdown. Ubisoft did a decent job of translating the story – a middling prequel to the series proper – but there’s only so much polish you can give a turd. 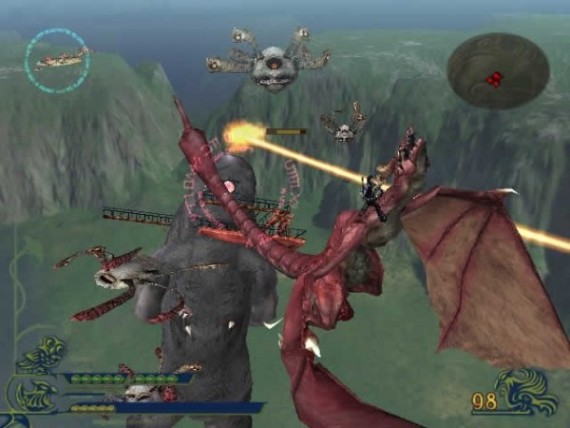 The original Drakengard accrued something of a cult following in North America, but was ultimately a critical and commercial flop. A compelling story can really only go so far with dull, repetitive gameplay. Square Enix was understandably hesitant to bring the sequel over, so Ubisoft ended up stepping in. The game was met with much the same reaction as its predecessor, but to their credit Ubisoft gave a solid translation to a deep and weighty story. It’s kind of a miracle that we’ve gotten every entry in the series thus far, and with Drakengard 3 just around the corner, we can thank Ubisoft for keeping us up to speed. 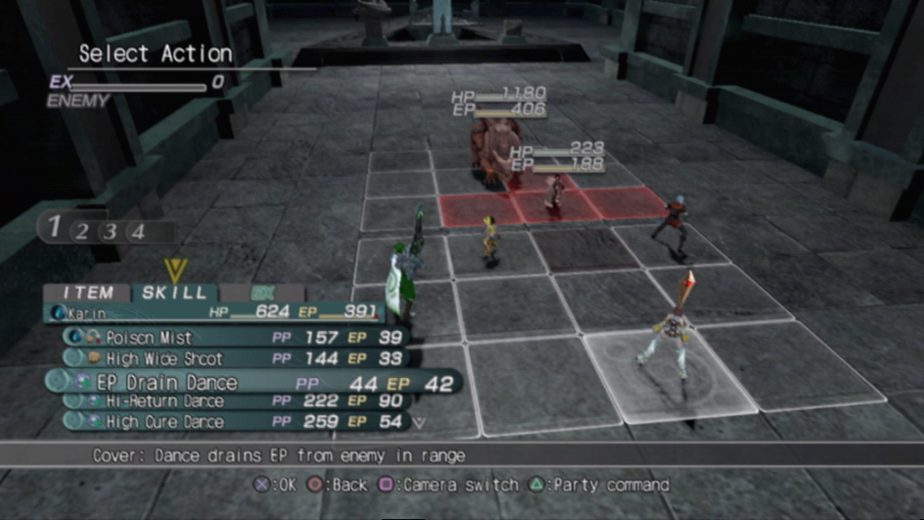 The first JRPG on Xbox 360 took a lot of flak from reviewers for being a little too generic, but is ultimately remembered fondly by most who played it. The simplified grid-based combat has held up surprisingly well, although the early 360 graphics definitely have not. It has a decent (if not particularly surprising) story that’s well-translated, but let down by abysmal voice acting. Given that Grandia 2 and Drakengard 2 both had decent casts, it’s a bit of a letdown. 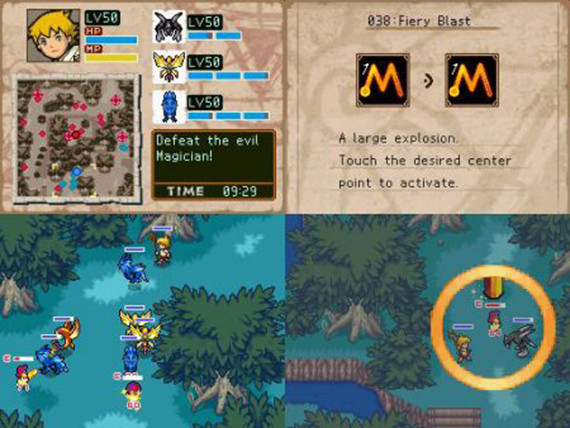 One of the first things that springs to mind when looking at the DS touch screen is the idea of drawing runes to cast spells. Unfortunately, while many games took a stab at the concept, none succeeded. Out of all those games, LostMagic is the strongest that made it to our shores (shame we never got the DS version of Ni No Kuni). The game is an odd hybrid of RPG and RTS concepts, and to its credit there are a wide range of spells you can cast. Unfortunately, combat ends up being monotonous, and the story’s nothing to write home about. The game’s got some darn pretty art, though.

Here we reach the point where we might be cheating a bit, because Astonishia Story is, technically speaking, a KRPG. It’s also probably the strangest title on this list, as it’s an unmodified PSP port of a decade-old windows game. Devoid of strategic depth or a compelling plot, the only astonishing thing about this game is that it made it to our shores in the first place. Why Ubisoft would take this and leave its greatly improved sequel (released by Atlus as Crimson Gem Saga, much to the chagrin of King, I’m sure) is a mystery. 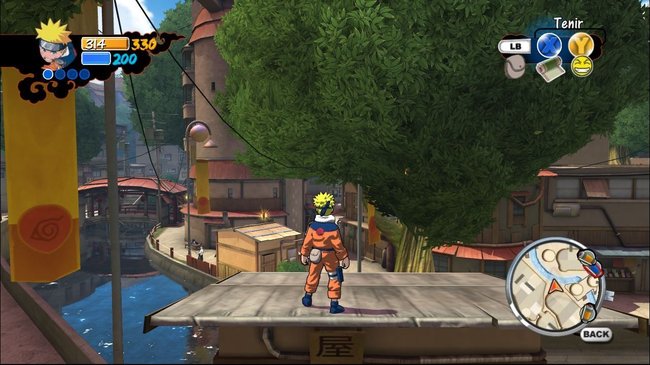 Okay, at this point I’m definitely cheating, but Ubisoft Montreal’s Naruto games bear a lot of the hallmarks of JRPGs. They feature large, detailed overworlds full of secrets, and while combat is more like a fighting game than anything else, it still takes place in a discreet subspace separate from the main game world. The games also allow you to increase your stats by winning battles and completing side quests, and it goes without saying that the stories are dense with anime tropes. Ubisoft Montreal is a big studio, so it’s hard to say how many people from the Naruto team are working on Child of Light, but if they share any team leads, I’d say the upcoming game is in good hands. 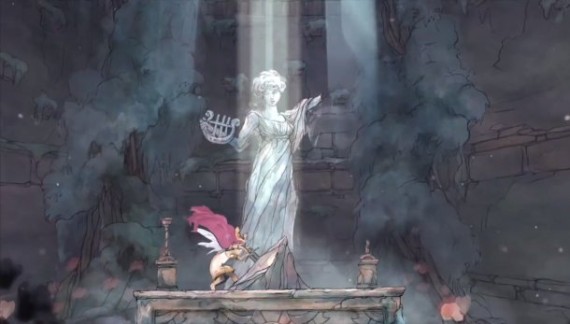 That, of course, brings us to our game of the hour. Child of Light is turning a lot of heads for a lot of different reasons. The most obvious and striking is its use of the UbiArt Framework engine, which is what made Rayman Origins and Legends look so damn gorgeous. Child of Light’s ethereal watercolor style puts the engine to good use. When you see the characters in motion, it’s enough to make your jaw drop. The storybook style gels well with the game’s storybook… uh… story, which is written as a charming nursery rhyme. 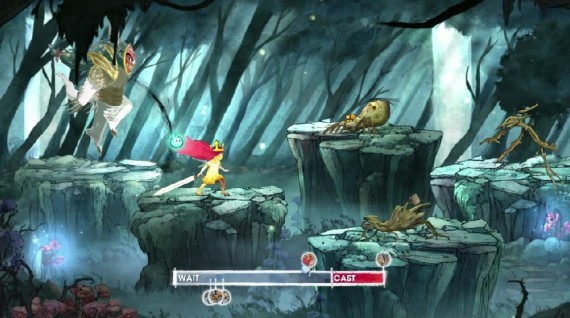 The gameplay dynamics are also quite interesting. Exploration is handled from a side-scrolling perspective, but that doesn’t really limit your range of movement. Not only can you duck into any house in the background, your character can also fly, allowing for expansive environments full of hidden secrets. Combat is a traditional turn-based affair, but it uses an active time system similar to Grandia 2 of all things. Each character moves along an action bar at the bottom of the screen, and they can attack when their portrait is in the red “cast” zone. More powerful attacks take longer to cast, and you have to be careful using them, as you’ll miss a turn if you’re attacked while casting. On the other hand, the same applies to your enemies, so if you’ve got a good sense of timing you can finish a fight without letting them land a hit.

Child of Light is shaping up to be a deep and enjoyable Japanese-style RPG. It might not be the sort of game you’d expect from Ubisoft, but if you know your history it’s not exactly out of the blue, either. Ubisoft is familiar with the design paradigms of this genre, and this isn’t even their first crack at making their own. Their JRPG output has certainly had its ups and downs, but they’ve got a talented team working with a great engine, and everything we’ve seen of this game so far is very promising indeed. Child of Light will be available for download on just about everything come April 30th.