Godus was released on Steam early access in September and it was utterly terrible.  The warning signs had been there, once the Kickstarter campaign came to a close and the game started changing from what was promised into something more iOS-freemium, but there was still hope that the PC version would escape the dark and stick touch of free-to-play taint.  That didn’t happen and Godus seemed like an unrecoverable loss, and it wasn’t helped by 22cans going dark for five months.  The reason they went silent is because they were working on a major overhaul based on customer feedback, and Godus v2 is the result.  It may still have a long way to go to be good, but at least it’s not as bad as it was.

There’s a lot that’s changed here, so let’s take this from the top- in Godus you’re an unnamed god watching over a small tribe, shaping the land and performing miracles to help them expand from a couple of people in simple shelters to hundreds of devoted followers inhabiting every nook and cranny of available land.  The unhelpfully varied terrain needs to be flattened so new dwellings can be built, which can then be filled by new people, who can build more houses, etc.  As the population grows new ability cards open up, and once the cards are completed a new active or passive effect is added to your growing god-like powers. 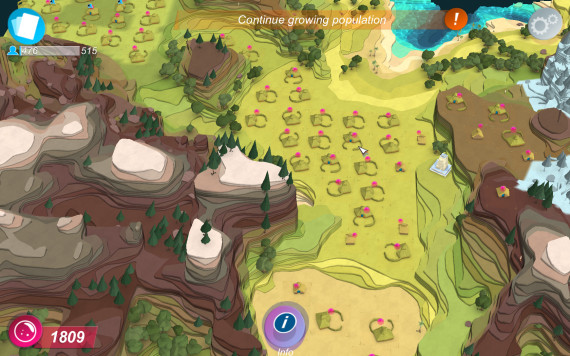 Most cards have a stripe down the left-hand side that needs to be filled in for the card’s ability to become active, and this is done by applying stickers, which is as good a way as any to purchase an upgrade by spending limited resources even if it does sound a bit silly.  Stickers are initially found in chests buried underground, with a little falling-confetti effect above to let you know there’s digging to be done.  Later on you can send your worshippers on a voyage of discovery to earn more stickers, where a shipful of adventurers disembarks on a mini-level and you need to figure out how to manipulate the land to guide them to the goal before time runs out or they get squished by giants.  No matter how you pursue your stickers, there’s going to be a lot of earth-moving involved, and this is vastly improved over Godus’s first attempt.

Godus initially had you teasing the land into shape with endless clicking, each click dragging the ground out a bit more in a tediously simple task of endless repetition.  New-Godus lets you click and drag the land around, and while you can’t pull it forever it’s still vastly more satisfying to terraform the world.  It’s still pretty touchy, frequently grabbing the wrong level of ground, but it’s Early Access and the game still has a long way to go so that’s not totally unexpected.  The important thing is that the main method of interacting with the world isn’t a pointless click-fest any more. 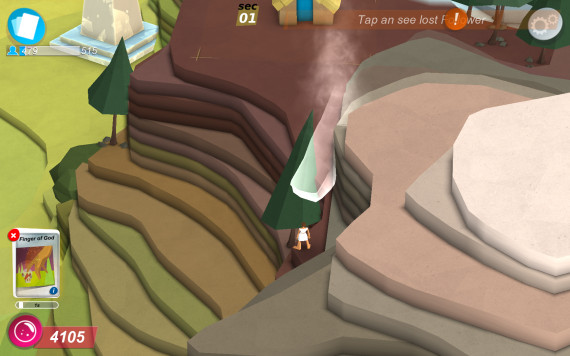 Harvesting belief, on the other hand, is still non-automated.  The houses get a little pink bubble of belief and each one needs to be harvested manually, unless the house is in a settlement.  The towns are much smaller in this one but you can build more of them, and also assign them different purposes such as building or farming.  The effects seem to be fairly subtle, but honestly I wasn’t able to farm enough stickers to activate the farming card so maybe the different settlements have more than just aesthetic differences.  Finding the eleven billionty stickers necessary to activate the card seems more like work than play at this point, so it can go undiscovered for now.

And that’s the problem with Godus in its current iteration.  When things are moving along it’s not a bad time killer, in that you do things and all of a sudden it’s later than before, but that’s not the same as fun.  There are several systems but very few count as a game.  It’s kind of nice to see your guys spread out as you flatten the land and open up new territories, but there’s no fail state.  They’ll keep generating belief for as long as you’re willing to wait for it, which allows more terraforming, which ends up giving you more houses to click on to manually collect belief.  Opening up shrines and other discoveries expands the map, but the only cost is the time it takes for the tribe to repair and activate it.  Lead the little guys to a  discovery,  leave them to its repair, come back later to collect the reward.  Wheee….? 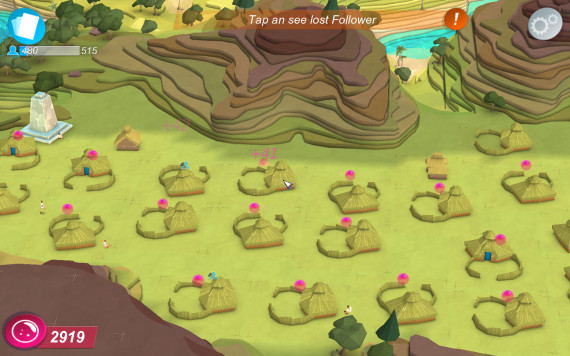 As for “later”, that’s another problem entirely.  The building time can get ridiculous,  with advanced buildings taking 15 minutes or more to construct and one of the later shrines taking over 2 hours to activate.  Just… no.  No thank you, no.  There’s not enough going on elsewhere in Godus to make that kind of wait worthwhile.  The biggest cost in the game is actual real-world time, and while in this version of Godus there’s no hint of microtransactions to speed things along that’s hardly a consolation.  Godus v2 is far better than the original v1, but there’s still a long way to go to turn this into anything other than a semi-mindless click & wait simulator.