While I have a huge list of games I’d love to see HD remakes for, Cel Damage was not exactly near the top going into GDC 2014. After all, it was basically Twisted Metal for Xbox with cel shaded cartoon characters and was released at a time when vehicle combat games seemed to come out every other week. The thing it had going for it, however, was some really interesting cartoony visuals. With Cel Damage HD announced for PSN, we managed to talk to the developers of the title and get a better perspective on why they felt this game was needed in the modern gaming marketplace.

The founders of studio Pseudo Interactive are well aware of the flaws in the original Xbox version, and they were not shy in telling us so. However, Cel Damage always held a special place in their hearts as it was one of the first games they worked on, and as such two of their co-founders are looking to bring an updated version to a new generation of players. Their new studio is Finish Line Games, and what they lack in size they more than make up for in devotion. This has always been a passion project of theirs, and the excitement they have in their title is infectious, even to those of us that were less than impressed with the original version. They’ve worked hard to ensure Cel Damage HD will not only appeal to nostalgic gamers (themselves included), but hopefully draw in a new generation of gamers completely unfamiliar with the property. 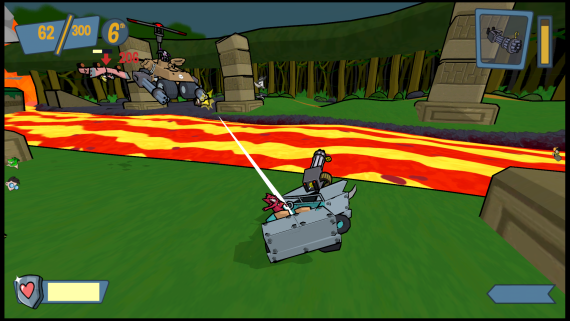 From what we’ve seen so far, what sticks out most are the graphics, which have a beautiful cel shaded art style and manage to improve upon the original in nearly every way. Cel shading was all the rage for a while, but it seemed like it was a fad that came and went almost a decade ago now. Because of this, Cel Damage HD sticks out even more on the modern market and its trend towards hyper realistic or super retro visuals, and the stark visual aesthetic will likely be one of the main selling points of the game. Sure, the original Cel Damage didn’t age that badly because of the art style it used, but everything in this remake just looks better. The bright, cartoony graphics really epitomize the zany mayhem you’ll find in the game just perfectly, and this is a look that was exactly tailored for the game. The game runs at 1080p, all textures in need of uprezzing were uprezzed, and everything runs beautifully in all its hi-def glory.

One of the other big changes was attenuating the difficulty from the original game into something that could be more accessible to a wider range of gamers. The one hit kills have been removed, and a new damage system has been introduced. Both of these changes were already made in the Cel Damage Overdrive version, but that upgrade never saw a North American release. While there is certainly still a challenge here, the AI has been adjusted in a way to make it less brutal which should mitigate some of the frustration some found in the original. A boost meter has been added, and you can build it up as you do tricks and dodge attacks to give your car a temporary boost. Dodging out of the way will give you character temporary invulnerability, and doing stunts or power slides will give your kills extra points. There aren’t any huge changes in the way of the gameplay, but the modifications made were done to emphasize skill and experience with the game and provide an extra layer of depth to what otherwise might look like a simple car battling game. The Xbox version too frequently devolved down into just chasing down the best weapons and cruising to victory and a decent amount of effort has gone into making the gameplay a more strategic than the original version. 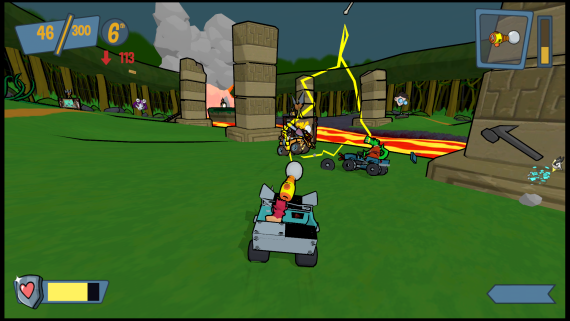 The core of the game itself was left relatively untouched. This is a zany, fast paced vehicle combat game where cartoon characters blow each other up with increasingly zany weapons. There weren’t any additions in terms of content to the actual game, so the characters and levels will remain the same. You start off with the same six characters and can unlock four more boss characters along the way. And while the aforementioned minor touches have been added to appeal to a more hardcore set of gamers, it was important that Cel Damage HD still retained the simple jump in and play appeal that drew fans to the original. It was important to allow even novice gamers to dive right in without having to study some complex manual and get their PhD in blowing up cars before having a shot at finishing a level and despite the minor tweaks the focus is clearly meant to be on pure, simple fun.

The driving force behind this game is the multiplayer and the party mentality that many modern games seem to avoid entirely. With great pride, Finish Line Games told us that they were going to be the first four player split screen title available for the PS4 which should excite fans of party games, an crowd that most games just don’t seem interested in catering to anymore. When this game was first released, it got lost in a sea of car combat games, games featuring cel shaded graphics, and party titles meant to be enjoyed in the same room with friends. Now that flood has turned into a trickle, and the market is crying out for a title like this. This is a game that harkens back to a different time and a different mentality when it comes to game design. I don’t know if this is quite the game to bring back local multiplayer parties, but the fact that it wants to try almost makes it worth a look all on its own. 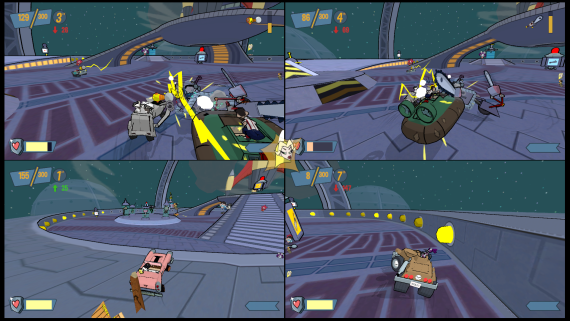 The game will launch simultaneously on all the relevant Sony platforms, composed of the PS4, Ps3, and Vita, and the experience should meld seamlessly between the systems. We will see both cross buy and cross save, although strangely enough we will not see cross trophy due to some wonky technical issues. The PS3 and PS4 versions will share the trophies between them, while the Vita will be its own thing. You can even save your progress across different consoles, and you can log in to your friends console with your account even if they are already logged into theirs and continue to rack up trophies and save your progress even away from your home console. The Vita version definitely looks to be the little brother of the three in terms of the overall experience, but if you are looking for a little car combat on the go you could certainly do worse.

While there is a lot that looks promising here, there are some issues that already worry us. The Vita version is currently planned to be single player only, which removes a great deal of the fun from the game. PS3/PS4 will have the split screen multiplayer madness that delivered most of the fun from the original, but those with the Vita version will be left playing alone through a single player campaign. Most heartbreaking, however, is that neither the PS3 nor the PS4 version will see any online multiplayer. This is the sort of game that cries out for an online multiplayer element, but unfortunately the small studio size and resources necessary to build an online multiplayer mode proved to be barriers they were unable to overcome and plans for an online mode were scrapped. They did hint to us that it might be something they put in if the game is received well enough, but it currently seems like a long shot and something that would’ve given this game real legs will most likely be absent.

There is no official release date yet, but Finish Line promises we should have our hands on the final version very soon. They also wanted to shy away from the standard retail price, and while we couldn’t get an official price out of them just yet, they were considering putting this game in true bargain territory. And, depending on how well it does, the people at Finish Line are eager to add in some new DLC or even a true sequel if sales allow for it. One thing is abundantly clear after talking to the developers: they are truly passionate about it and are excited to get Cel Damage HD into the hands of a new generation of gamers. While the small studio size and limited amount of time and money lead to some really disappointing omissions, the party atmosphere this game is looking to foster should provide something that just isn’t available anywhere else on the PS4 right now. In a sea of serious shooters, realistic racers, and a flood of sports titles, Cel Damage HD might just provide that little spark of wacky fun the PS4 desperately needs right now.