First off, it’s pronounced Planets Cube, and it’s a Minecraft-style RPG set in a universe where all the terrestrial bodies have abandoned their spherical configuration and gone cubical instead.  Hence, Planets³.  There’s a Kickstarter campaign that’s been running at full steam for a bit over three weeks now, and with just a few days left on the clock it’s going to be a race to the finish line, but not by any means an impossible one for this ambitious exploration game.  We’ve gotten some hands-on time with the ultra-early alpha, and while it’s short on gameplay at the moment the cubic world is still a fun place to explore.

The basic plot is that of most survival games, at least at the beginning- you’re on a world with next to nothing, and you harvest resources and build until you’ve crafted and created your way to safety.  There are several things that should set Planets³ apart from the crowd, though.  First up is an overarching story the player can choose to follow, granting new skills and tech as various quests are completed for the planet’s inhabitants.  Eventually the plan is to earn a rocket, allowing the exploration of the planets you can see from the surface of your starting world, pursuing the mystery of the aliens who crashed into this planet many years ago.  That’s going to require leveling up your character’s skills, in an Elder Scrolls-style “use it and it gets better” progression.  Use a weapon or tool that’s technically too heavy and, while it will take longer to swing (or whatever other action it might perform) than something more suited to your current skills, you’ll get better eventually. 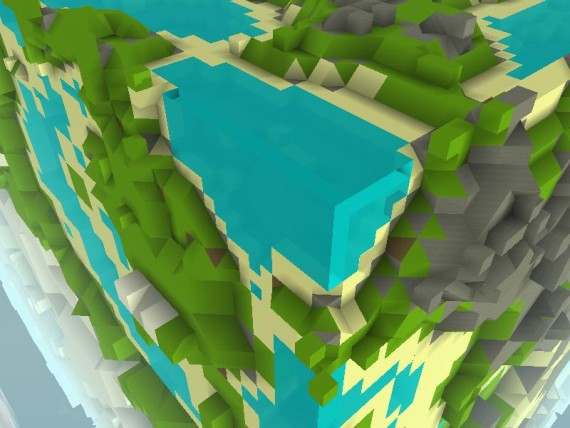 The most obvious thing giving Planets³ it’s own non-Minecraft identity, though, are the worlds referenced in the title.  Each procedurally-generated planet is comprised of 25cm cubes, and with an average size of 8km apiece that means worlds are generally built of over 32 trillion blocks.  The blocks aren’t constrained to the standard cube format, either, with slopes and angles carved off to allow hills, trees, buildings, and anything else you might care to construct to have a more clearly defined shape than the usual giant unchangeable cubes would allow.  Running around the world in the pre-alpha showed off some nicely jagged terrain, still constrained to straight lines of course but with a nice variety of detailing.  It’s a bit of a chaotic jumble at the moment, due being in a demo not ready for prime-time, but with some work on the level of detail and time spent taming the land contours this should end up looking distinctively pretty.

Building creation is also off to a good start.  The pre-alpha has infinite inventory, so clicking and dragging to place a variety of substances made for a really nice base for what would have been an epic treehouse, if the super-early nature of the build hadn’t reared its head and crashed the game before I could complete it.  Building the tree trunk was simple, thanks to the core being a wooden block extruded into a 2×3 pattern and raised up until I was happy with the height.  Then I switched block shape from cube to half-block cut at a 45-degree angle, laid flat so that the tree trunk had a hint of rounding on each of the corners.  Then back to the blocks again to fill in the remaining gaps, dragging and filling in one simple motion to complete the 4×4 structure, and I had an acceptably round tree trunk.  Another minute or two put the spiral staircase running up the outside, and then a stone floor, some walls, great plans were made for quickly knocking together something impressive with glass windows, a roof, and a leafy canopy, and then… sadness and lost effort.  So after ctrl-alt-del-ing my way out I reloaded, hit F2 to enable the flight mode cheat, and went to another planet instead.

Very little of the above will be quite that easy in the final game, of course.  You’ll need to harvest your resources with tools strong enough for the job, take quests from NPCs to learn a variety of crafting skills, and spend many, many hours earning the ability to go into space.  The pre-alpha simply exists to give a sense of the world, and while there’s a ton of work to be done it’s already a fun place to mess around in.  There’s a very long road ahead to make the game in its current form match the concept art, but with the Kickstarter moving along at a decent speed it’s looking pretty good for Planets³  to have a chance at becoming what it wants to be.