Obsidian is well known for crafting incredible stories, most notably within a fantasy or science fiction setting. With Knights of The Old Republic II, Fallout: New Vegas, and most recently South Park: The Stick of Truth notched firmly on their proverbial belts, it’s a tad strange that the latest title from the roleplaying experts is a tank shooter with an emphasis on multiplayer. And while certainly a far-stretch from their assumed comfort-zone, chatting with Rich Taylor, the project director at Obsidian Entertainment, reveals a true passion. In our short discussion, he spoke of vehicle authenticity, historical significance, the potential for story-driven experiences, and the dedication to providing an array of features rarely found within the confines of the military genre.

On the surface, Armored Warfare doesn’t feel like an Obsidian title. Peeling back the layers of gorgeous scenery and metal-on-metal action, however, unveils the strokes of Obsidian’s brush. The company’s much lauded approach to storytelling, the character development, expert RPG craftsmanship and careful attention to detail is found amidst the armored vehicles, explosions, crumbling shacks and enemy fire. It’s an odd choice for the company, but Armored Warfare feels more like an expansion of horizons, rather than any sort of cash-in. Perhaps the only worrying aspect is its free-to-play concept — though I was told it wouldn’t follow the path of pay-to-win.

It’s difficult to judge a book by its cover, however. So during the 2014 Game Developers Conference, I was given the opportunity to explore a Player vs. Player mission. It was a typical co-op setup, with four of us teaming up against the beautiful forestry, crumbling pavement, destructible structures and, of course, enemy forces. Naturally, one run wasn’t enough for me. There was too much to see, too many tactics to explore, and another tank model I was eyeing from the get-go. Both playthroughs were with different players, but the environment, enemies and objective were the same. However, both scenarios played out much differently. 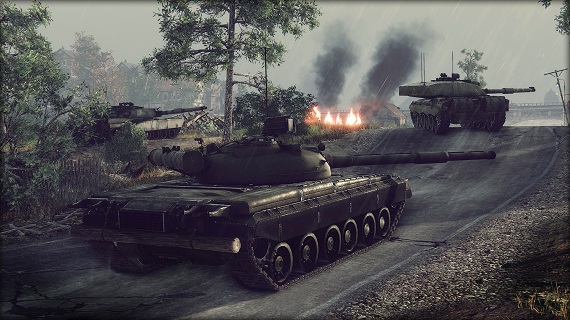 My first run was the quicker of the two, since I was mostly experimenting with the destructible environment and shooting through enemies like a reckless buffoon. I watched in awe as my tank pummeled through buildings, fences and assorted objects like… well, a tank, and left no survivors to tell the story of my conquest. My second run was a more tactical affair. Instead of pushing through enemy vehicles with my metal workhorse, I chose the smallest tank of the three available units. It was a fragile vehicle by tank standards, but its speed was my only concern. I began zipping through shortcuts, scouting enemy positions, and sniping them from various vantage points. It was a more fulfilling experience, and one that was quite absorbing — even in a room full of people.

The combat is the meat and bones of Armored Warfare, and it happens from a third-person perspective. It;s fast, fluid, and relatively simple in terms of controls. You drive around, spot an enemy, target and fire. It’s the strategy that unlocks the floodgates of fun, however. In the short, linear PvE run, it was clear where different tactics could be employed. While the demo showcased an early-game mission, there was still a handful of strategy to be utilized in the playthrough. Scouting, flanking, sniping and working together with teammates to form various operations enhances the chaos by offering something many online shooters lack: substance. Indeed, it was a short mission, and a pretty easy one at that, but it also exposed more depth than I initially expected.

Most exciting, perhaps, are the tanks themselves. The vehicles on offer are shockingly diverse, ranging from early 1950’s models, to the more modern military machines of today. The authenticity, too, is mind boggling, with the smallest, most seemingly insignificant details brimming through the design. Additionally, every tank handles differently, with speed, armor and fire-power determined by the tank’s historical stats and classification. As such, Armored Warfare feels, at times, like a simulation — at least in terms of fidelity; realistic handling, gorgeous visuals, and the multitude of combat options lend to its representation, which is chock-full of potential. 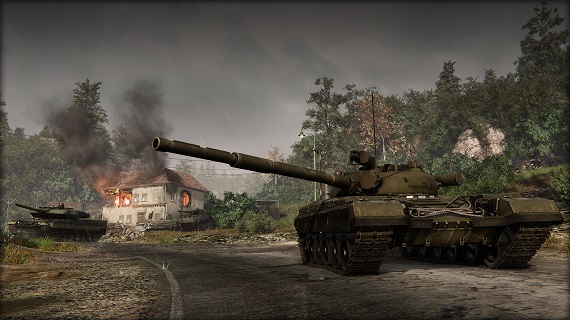 Armored Warfare will follow similar MMO rules when it comes to upgrades, unlocking them through an assortment of missions as you progress. There’s a wide-web of creativity, too, with each player’s respective build being tailored to their specific style of play, but we weren’t able to dip our feet into its systems during the demo. According to the team, there will be ample incentive to play both single-player and multiplayer content, with no obvious restrictions in terms of withheld content. “They’ll both be full-featured,” said Mr. Taylor when I asked whether single-player is required to fully enjoy the game. Upgrades won’t be a concern for those seeking a player vs. player only experience, either. “You’ll be matched with players of similar level in multiplayer, so there’s nothing stopping you from skipping the single-player entirely.”

The game will also feature 15 vs. 15 multiplayer scenarios, but they too weren’t available during the hands-on. Clans, territory wars, and unique cooperate PvE missions were also mentioned, but little information was made available. It’s clear that Armored Warfare is a beacon of potential, and there’s a solid foundation of entertaining, strategic gameplay that can only improve with time. It’s beautiful, it’s fun, and there’s a sense of arcade-like competitiveness. Armored Warfare may have been a peculiar choice for Obsidian’s next game, but it’s clear that it’s shaping up to be something of an amazing experience — far beyond the realms of its limited genre.