Even though it’s never had the library of the Nintendo 3DS and it most likely never will, I’ve always had a soft spot in my heart for Sony’s latest handheld console. For most of PS Vita’s early lifespan, it was essentially my dedicated Persona 4 Golden machine as I just couldn’t get excited about games like Alien Breed or Let’s Fish! Hooked On. Still, it has managed to build up a fairly impressive swath of games over the past year or so, and while Sony’s attention has clearly been on the PS4, that doesn’t mean the company doesn’t also love the smallest and most portable member of the family. Just yesterday, in fact, Sony’s official Twitter account sent out a tweet that invited all of us to take a look at what it referred to as “portable gaming perfection.” About time Sony started paying more attention to its scrappy little handheld! Let’s see which new upcoming game Sony is referring to and… 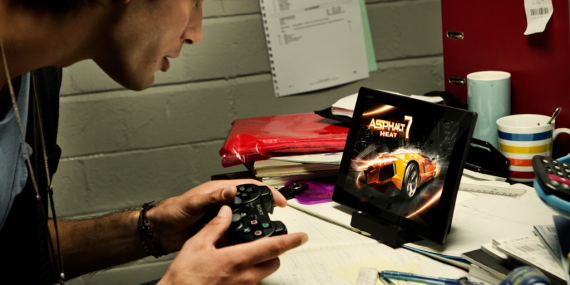 Astute readers might notice that this isn’t Sony’s handheld platform, the PS Vita. They might also notice that this is not what most gamers would consider “portable” what with the whole tablet, stand, and Dualshock 3 controller. Their equation is all wrong. It should be: Anything + DUALSHOCK 3 = not freaking portable. I mean, yeah, I suppose it is portable in the sense you can move it from place to place but if that is the case you guys should really see my new portable PS4 that I can play wherever I want as long as I move the system, screen, controller, and have somewhere to plug it in. True portable gaming perfection right there. Portable is like totally a state of mind, man. Anything is portable if you want it to be. If I see a guy playing the Vita on a bus I’d think, “check out that sweet portable gaming system the guy has.” If I saw someone playing this on the bus I’d wonder how long he’d been living there.

Regardless of how far Sony wants to stretch the whole “portable” gaming label, I can’t help but feel bad for the poor, unloved Vita. What you are looking at here is the Sony Xperia Tablet Z2, which admittedly is a pretty sweet tablet and an excellent device in its own right. And Sony did only technically retweet what @sonyxperia sent out, and I doubt that branch of the company is very concerned about how the Vita is doing. However, someone at Sony might want to at least refresh their employees about their current console lineup and remind them that, hey, uh, guys we already kind of have a portable gaming device. Now it just feels like the unloved stepchild, crying for attention while Sony sends it to clean out the garage so it can spend more quality time with its little piece of portable gaming perfection. I don’t know how they expect gamers to remember the Vita when they themselves seem to be having some trouble doing so.