With the recent discovery of the long-fabled Megalodon in Battlefield 4, gamers have become reinvigorated with monsters and horror in their Easter eggs. Trust me, a shark that could level an entire fleet of warships with its own massive girth is pretty unsettling (I can’t imagine being one of the first people to see it appear). So in honor of this milestone finally reaching reality (it’s about time), we’ve decided to look back at five creepy or scary Easter eggs in video games. Check them out!

NOTE: All of these Easter eggs are real and do not require glitches or hacks to replicate; they’re fully accessible to any player. Also, these are Easter eggs that have been proven, which means no theories or tall tales. There will also be no spoilers in this article. 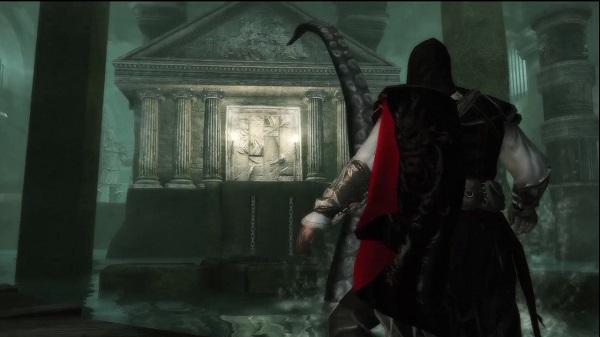 After the shock n’ awe of the Megalodon in Battlefield 4, why not kick things off with another large water-based predator? In Assassin’s Creed II in the Visitazione’s Catacombs stage, the entire chamber is flooded with dark, murky water. By setting up the levers and switches in a certain way and waiting about 30 seconds without moving, a cutscene will trigger to reveal a living, breathing octopus monster with glowing eyes swimming in the room. By activating another switch again and looking over the edge once more, the octopus will raise a giant tentacle and swipe at Ezio. The octopus doesn’t kill you, but the cutscene where the octopus attacks lacks any audio (aside from the music). No sound effects or voice acting is present, which could imply an unfinished objective for the game. It’s certainly eerie, especially considering the monster’s size and proximity to the player. It’s no island-sized shark, but it’s definitely a creepy sight. 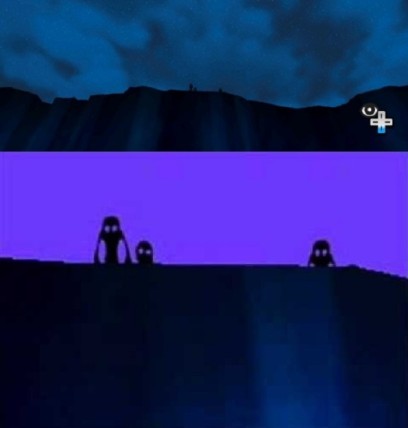 In Super Mario Galaxy 2’s Shiverburn Galaxy, you can either jump across the lava pools or dodge black holes, or you can find faceless, scarecrow-esque figures watching you from atop a high cliff. Pick your poison. These alien-looking creatures watch Mario from above with vacant eyes, enlarged heads, and stringy, misshapen limbs. They serve no purpose and make no movement; all they do is watch. The game’s code does give them the label of “HellValleySkyTree”, which makes their presence even more unsettling. Nintendo has yet to confirm what exactly these figures are for, either for an unfinished level or objective, but their presence is constantly disturbing. Jumping across lava is bad enough, but when you’re just being watched the whole time by monsters without a displayable purpose (or eyes), it’s bound to get your nerves on edge. 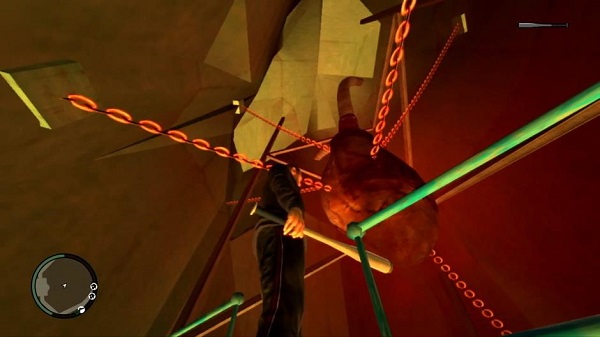 Grand Theft Auto has already established itself with creepy stuff like ghost cars and randomly abandoned beach-side strollers, but nothing comes close to the supernatural terror of Liberty City’s own maiden of freedom, The Statue of Happiness in GTA IV. The journey for its secrets begins suspiciously enough, since you must use an aircraft or boat to get to it (or swim to it yourself, if you’re daring). Further ascent reveals a sign on the door saying “No Hidden Content this way”, which is basically Rockstar just dangling a carrot precariously over your Easter egg-starved head. Entering the building reveals a giant beating human heart chained up inside the statue, a giant beating human heart that you can’t destroy even with the most powerful weaponry. I’m not sure if Rockstar is trying to make some sort of intricate cultural commentary about how freedom and happiness are unbeatable and immortal, but they’re probably just being crafty goofballs who like giving people nightmares. 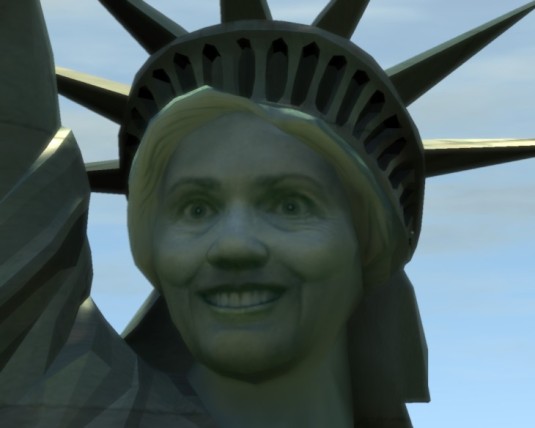 I mean, look at this thing’s face. Would you appreciate knowing that something that looks like that is living, breathing, and will continue to do so…forever? 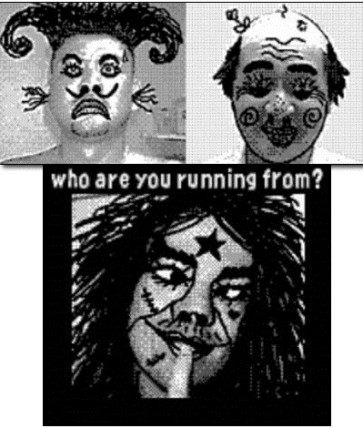 I never had a Game Boy Camera, so I never really understood the appeal of it. So you could take grayscale, low-resolution pictures of yourself, print them out with a separate accessory, and randomly creep out your friends by pasting the pictures to their ceiling. But not even playful uncomfortableness could match the bizarre and disturbing Easter egg hidden in the Game Boy Camera software. If you manage to select an option in the menus labeled “Run”, the game would briefly freeze, then bring up pictures of faces that have clearly been vandalized with Sharpie markers. The faces have makeup that looks like it was designed by a Kabuki performer loaded up on caffeine, but the haunting music (which sounds like someone dropped the original Donkey Kong intro theme into Audacity and tanked the pitch) is undeniably unsettling. But the worst part is the cryptic message displayed with the images: “WHO ARE YOU RUNNING FROM?” Well, considering the abrupt appearance of these creepy images, I think people will be running from this game. Good thing you can play your Game Boy on the toilet; after this disturbing creep-fest, I can’t think of a better place to play it!

In a rather new entry to the Creepy-As-Hell Easter Egg, we have Pokemon X and Y, which feature a very brief, but unexplained occurrence in Lumiose City. One of the buildings on the Northern Boulevard has multiple floors and if you visit the 2nd floor, all music will silence and a random Hex Maniac character will appear. She teleports around the room while the game’s in silence, before turning away, saying “No, you’re not the one…”, and vanishing. Further clues imply that this Hex Maniac was waiting for someone specific. If you visit the Lumiose Station and examine the back of one of the TMV Timetables, you’ll read “I’m going to go for help. Wait in the usual place.” While there’s no confirmation of these two occurrences being connected, the lack of preparation and the sudden change in tone makes this one of the most unsettling moments in recent Pokemon games. Sure, people love talking about that stupid Lavender Town Creepypasta garbage, but this is something actually coded into the game, so there’s a strong chance that this Easter egg could potentially evolve into something more.

Any other frightening Easter eggs in gaming you want to share? Let us know in the comments!