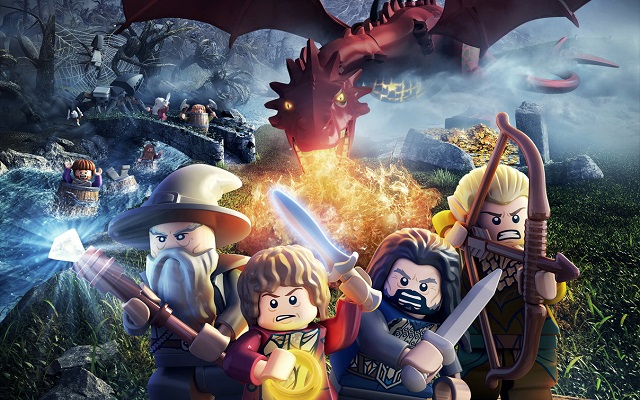 Traveller’s Tales takes us back to Middle-Earth for another LEGO-sized adventure.  LEGO The Hobbit is filled with the same light-hearted humor the LEGO franchise has been known for since its inception.  While it does little to push the formula forward, LEGO The Hobbit is still a fun adventure worth taking for any fan of Peter Jackson’s films.

LEGO The Hobbit is based on Peter Jackson’s The Hobbit film trilogy.  Bilbo Baggins, a Hobbit, is hired by Gandalf the Grey and Thorin Oakenshield to be the burglar in their party of thirteen dwarves.  Their quest is to take back The Lonely Mountain from the terrible dragon, Smaug.  Their quest will take them to Rivendell, Goblin Town, Mirkwood, Dol Goldur, Laketown and The Lonely Mountain among other locales. 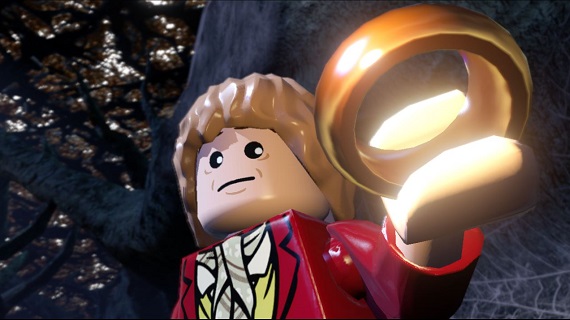 The story is told similarly to LEGO The Lord of the Rings.  Audio for the main characters has been ripped straight from the films, though streamlined to be more appropriate for children.  No beheadings, brutal deaths or sexual innuendos here.  The audio does sound good in places, however there’a quite a bit of repetition.  Gandalf screams “run” one too many times and in inappropriate situations.  The Dwarf Bifur (the one with the axe stuck in his head), who only has one spoken line in the films, is forced to repeat the line multiple times.  Original audio is used for side-missions, but is generally hit-and-miss.  However, having Christopher Lee narrate the loading screens is a nice touch.

Your enjoyment of the plot will depend on your enjoyment of the films.  Those looking for something more pure to Tolkien’s tale will be left bitterly disappointed.  Those who enjoyed the films for what they are will enjoy the story, even if it has been streamlined for children.  It’s entertaining and will keep you hooked for a while. 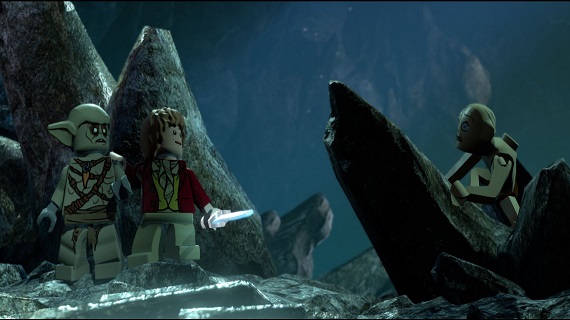 It’s a good thing then that the LEGO formula still holds up.  LEGO The Hobbit is fun to play, though doesn’t do much to move the formula forward or fix any of the problems of the older games.

LEGO The Hobbit relies on simplicity.  There is one button to attack, objectives are in plain sight and a line of transparent blue studs makes sure you never get lost in the open-world.  It’s an easy game to play and beat with total time coming in under six hours.  However, that doesn’t account for the hours of post-game content to burn through.

Like the previous few LEGO games, LEGO The Hobbit features an open-world to explore.  You can sight-see key locations from the films, replay levels with any character in Free-Play, participate in side-quests, collect Mithril bricks and unlock new characters to play as.  There’s a ton to do, and you’ll need to do to unlock everything.  For example, every level contains areas that only certain characters can access.  Using Free-Play, you can use any of your unlocked characters and access those secret areas.  There are more than 80 characters to discover and unlock.  These range from obscure characters like Mirkwood Archer to popular characters like Saruman, Elrond, Sauron, Azog and Bolg among others.  With all of this content, you can easily double your time in Middle-Earth. 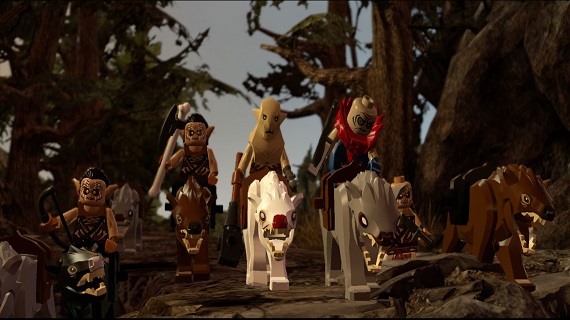 Studs are your main source of currency.  The majority of objects in the world are destructible and give studs when destroyed.  These are essential to achieve “Master Burglar” status in each level, and purchasing new characters in the open-world.

Traveller’s Tales have always been great at designing levels, and LEGO The Hobbit continues that positive trend.  All of the locales are well designed with clever, but easy puzzles.  Those interested in exploring areas barely visited in the films will be happy to know that the game does allow you to explore areas the films briefly brushed over.  Dale, Erebor, the Elven Kingdom of Thranduil and Dol Goldur are all open to exploration on the open-world map.

For all the things LEGO The Hobbit does right, it fails to fix issues that have plagued the LEGO franchise for years.  There are a smattering of quick-time-events that break the pace and momentum of the game.  All you’re doing during a QTE is hammering one of two buttons for some unremarkable animation to display on screen.  The barrel-riding sequence, which was a fast and fun sequence in the films, suffers from QTEs, slowing it down and dragging it out. 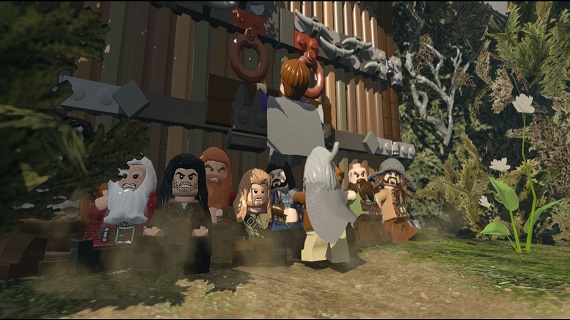 There’s also a huge issue with switching between characters.  Like LEGO The Lord of the Rings, you can have a party anywhere between two to ten members, which makes finding a way to swap between them very important.  Unfortunately, LEGO The Hobbit doesn’t find a way to make it easier.  It’s more cumbersome and clunky.  You can hold the Triangle button to pull up a radial menu that has room for five characters, select other characters, select equipment and look at collected loot.  The radial menu could have been expanded to include more characters, but instead it’s kept the same size.

LEGO The Hobbit isn’t the worst looking game ever, but it also does little to stand out amongst other next-gen releases.  Environments are pleasantly detailed and the game has good lighting.  Characters look just as you’d expect them to look.  After all, they’re just LEGOs. Audio is king here thanks to Howard Shore’s excellent soundtrack. 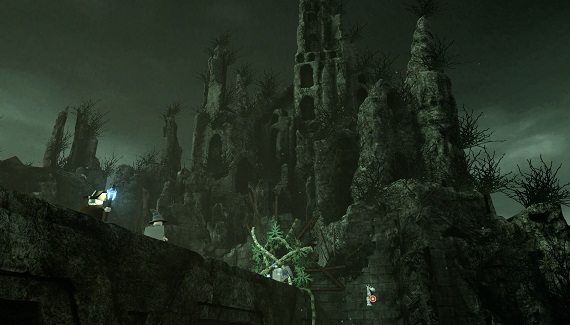 LEGO The Hobbit is a fun little game that serves its purpose well.  It’s a good game for kids to play and fans of Peter Jackson’s film trilogy will get a kick out of it.  It would have been nice if Traveller’s Tales strived to innovate its LEGO formula and included content from The Hobbit: There and Back Again.  It’s a fun game, yes, but never escapes the shadow of better LEGO games.