The dungeon crawling genre is nearly as old as gaming itself. No matter how much the media form evolves, there’s always something timeless about a romp through dungeons, fighting dangerous creatures along the way. Demon Gaze will be heading to Vita systems soon thanks to NIS America, but we’ve already spent some time with the upcoming title. The question we’d like to answer is whether Demon Gaze is the engaging game we’d hoped it would be, or another skippable title in a pool of innumerable dungeon crawlers?

For the most part, it appears that Demon Gaze offers a worthy experience. This is due in large part to its many unique facets. Obviously, the meat of the game is still traversing through first person dungeons, but it’s everything that’s built up around that which feels different. In the game you are the Demon Gazer, which is the game’s goofy way of saying you have a special gift that allows you to capture demons. If you can find powerful demons and defeat them, then they’re yours for the taking. 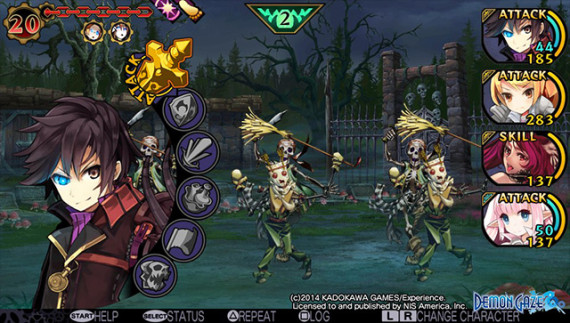 Nabbing a cool new demon ally is a rare experience and seems mostly tied to storylines. Of course, once you have one, they can be summoned during any battle. The player doesn’t control them and, if left out for too long, the demons begin to rage (possibly harming their own side in the process!). It’s a strange concept but demons are an incredible asset in tough fights. They cast skills and attacks whenever they see fit and can turn the tide of battle.

Another way in which Demon Gaze differentiates itself is the presentation of storyline. Sure, the story itself isn’t anything new, dealing with amnesia, demons, magic, and whatnot but the characters make it special. Everyone is honestly quite weird, which leads to a lot of humorous situations. So far it seems that the localization is focused on being entertaining and has yet to let me down. 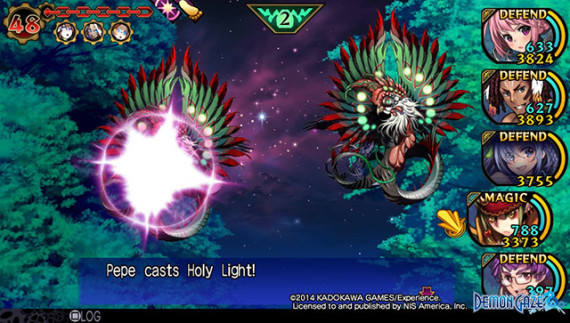 Characters are also induced with the asset of anime-style sexiness, as well. This will definitely turn some people away. Considering there are some especially egregious fanservice scenes even those who don’t mind may feel bothered by it. Unlike many of its contemporaries, Demon Gaze practices equal opportunity exploitation, making sure men can be just as awkwardly dressed.

The cast actually matter in the game and have distinct personalities instead of just being stereotypical, faceless shopkeepers and such. Each also has quests they’re willing to give as the story progresses, which can win you their favor. The game even takes some cues from visual novels by allowing you to choose what to say to characters during dialogue sequences. However, it doesn’t yet seem like your choices matter much. 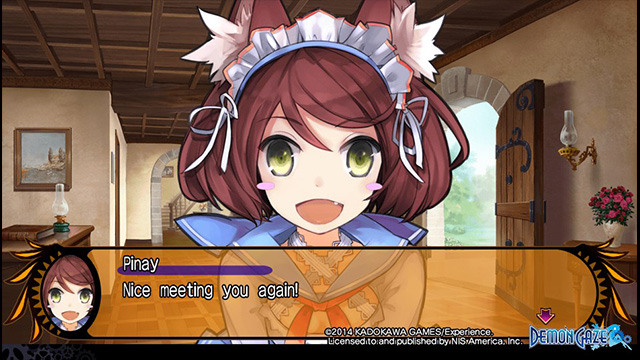 When you get down to actual dungeon crawling there’s not too much distinguishable about this game from others. The first person dungeon viewpoint uses some adequate 3D graphics, but nothing mindblowing. Fights are turn-based and boss demons definitely require a good deal of grinding to prepare for. Stages are quite large, although it may take a while to reveal some secrets. Interestingly, there’s even a way to leave notes for other players to give hints or warn about dangerous areas.

So far it seems like Demon Gaze is fully set to appeal to the dungeon crawler crowd, but it also has added features to possibly make it a great crossover title. If you’ve been scared off by the genre, perhaps the silly cast of characters will help lure you into this one. There’s a difficulty option included meaning you can always tone things down if enemies seem rough. You’ll be able to test out Demon Gaze for yourself when it launches on April 22nd for Vita.