Galak-Z had a nicely busy booth on the PAX East show floor, but thankfully not too busy to get a good couple rounds of playtime in.  After diving into a few missions, trading firepower with the enemies in its dark caverns, and dodging the flora and fauna that line the walls, Galak-Z revealed itself to be a zippy and fun free-scrolling shooter with an irresistible 80s anime vibe.  Dodging firepower while trying not to pinball off the walls, locking on enemies for a burst of explosive missile destruction, and carefully navigating to scope out an encounter before letting loose with the lasers when the radar popped up an enemy alert made for a good round of shooting, and the knowledge that perma-death was waiting to pounce on any carelessness added its usual pleasant tension.

The basic structure of Galak-Z is of an 80s anime, complete with cocky speed-suited hero in a fighter that owes more than a little design heritage to the original Battlestar Galactica.  The PAX East demo had a selection of three missions, and like the full game these had randomly-generated maps created from a number of pre-built areas, with enemy population and layout determined by level difficulty.  The player ship’s direction is controlled with the left stick while a trigger gives thrust, and inertia lets you thrust and then turn for strafing.  When careful maneuvering fails you can hit the juke button, which briefly flies the ship to safety above the Z-plane to dodge incoming fire.  For heavy damage you can let loose the missiles, holding down the lock-on button to shoot out a red scanning cone from the ship’s nose and letting go to release a homing barrage that isn’t quite so excessive as something out of Bangai-o but still nicely effective.  Enemies are smart enough to dodge, though, with AI that won’t sit there and let you pound on them.  Once you’ve completed the laser-dance with enemies, hopefully outgunning and out-dodging them until all that’s left is a pile of scrap, you can fly through their remains to hoover up what look like leftover Lego pieces to spend either back at base (if you survive the mission) or at a shop hidden in a side-cavern somewhere in the level.  The basic gun can be leveled up, or you can change the gun style to shotgun, upgrade health and armor, increase the missile stock, and probably a few other things that my too-brief play time on the show floor didn’t find. 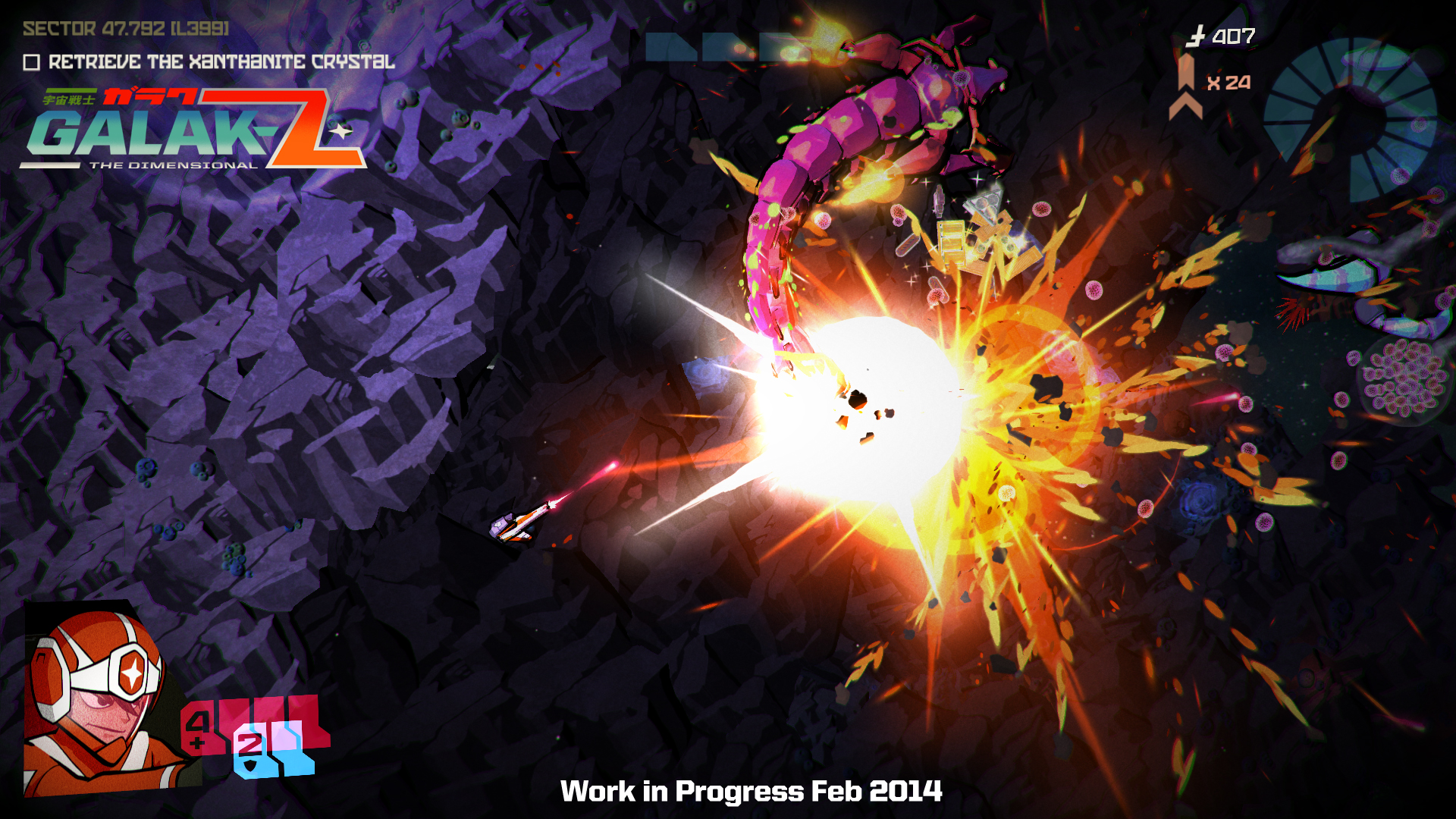 The other aspect I was unable to explore was story.  The mission briefings were pretty simple, of the “go here and collect this” variety, but once you select one you can visit different rooms in the station that, presumably, will have people to talk to or other functions.  Galak-Z is due this fall, which is a date 17-Bit admits is set in stone due to Reasons, but there’s plenty of time to fill in the missing bits between now and then.  In the meantime there’s nothing to do but wait and anticipate, and maybe watch as much cheesy 80s anime as possible in preparation.