Being a squirrel must be tough. Imagine a life entirely consumed by a desire to collect and devour food; constantly shifting from branch to branch, searching for comfortable spots in which to bury your lunch. What a life, right? And as if that wasn’t reason enough to jump into a set of Buddhist priest robes and start slashing foxes, squirrels are also graced with more predators than an abandoned 20th Century Fox warehouse. They rarely survive long once civilization introduces itself to their slice of the wilderness, and most of them probably have rabies, which has to be bummer.

If you think about it, squirrels are a lot like nature’s competition-level Pokemon card combatants; anti-social, angry, always on the lookout for snackage and unlikely to survive in an urban environment — albeit for drastically different reasons. The difference, of course, is that every squirrel has the potential to become a Ninja… evidently. During my exploration of the PAX East floor this year, I came across a lot of stuff: sweat, the flu, peanut butter handshakes, sweat, video games, sweat, dungeons & dragons and some sweat.

The Ninjabee booth, located somewhere between sweat number 2 and sweat number 3, was my first encounter with the company’s latest offering: Nutjitsu, a strangely titled game that sounds more like an obscure Brazilian fighting style than a combination of Pac-Man and stealth. Fortunately, it’s the latter, and also an extremely polished meshing of dangerously addictive objective-based gameplay, gorgeous hand-painted visuals and squirrels which, whether you’d like to admit it or not, are absolutely adorable.

Now, you’re probably wondering: what the hell is Nutjitsu? Good question, folks. Calling the game a Pac-Man/stealth combo, while accurate, does very little justice to its execution of each respective genre. Nutjitsu is, without a doubt, heavily inspired by the classic arcade games of yesteryear. I could almost could smell the pizza grease encrusted buttons of its emblematic cabinet as I gripped that — possibly equally greasy — Xbox One controller. A majority of Nutjitsu involves roaming various levels, randomly segmented by walls, steps, and splits, dodging enemies and collecting nuts of assorted worth (diamond, gold, silver, emerald, etc.). Nutjitsu can thank its genre for the established brand of addictiveness it offers, though not exclusively. While chasing highscores fuels the experience for many arcade-seeking enthusiasts, a mission mode amps those bubbling “must-play-now” feelings by tenfold. 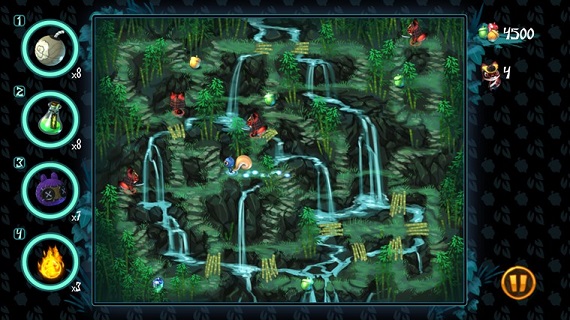 The goal is, as in many games of a similar design, to survive. You do so by moving around the screen and using power-ups. Sounds simple? Well, that’s because it is. The basic arcade mode, and likely the first mode you’ll experience, is fun enough. You endlessly walk through pretty-looking maps, collecting acorns to your hearts content and, like in Pac-Man, amassing an impressive (or in my case embarrassing) score. While doing so, you’ll also be collecting a currency which will eventually allow you to unlock various power-ups that can be utilized in-game. While you’ll rarely run through these powers in the arcade mode, primarily because there’s no real purpose, the abilities you purchase are crucial to your survivability in higher difficulties.

In mission mode, little changes in terms of gameplay. For that matter, most objectives you’ll be tasked with are pretty simple: collect so and so before the timer runs out, or search for whatever-needs-to-be-found throughout the level. The goal itself isn’t important, it’s the fulfillment of accomplishing said goal that you’ll chase 20, 50 and 100 games in. You’ll still be evading the same enemies, collecting similar nuts, doing mostly what you’d do in the arcade mode, but with a slight twist: losing matters. As you collect acorns in Nutjitsu, evading villainous samurai foxes — an absurd sentence I never imaged I’d be piecing together — is made substantially more difficult thanks to a nifty mechanic: the more nuts you collect, the more the opposition increases in numbers.

The strategy, as far as I could tell, is to collect only the most valuable nuts. This, naturally, can lead to an assortment of tense situations where you, the ninja squirrel, are cornered by enemies and are forced to employ a very-pricey power-up. Top that off with objectives demanding specific acorns and you find yourself balancing score and mission, collecting undesirables, increasing the forces slowing your progress, and shooting for the goal before the timer reaches its end. 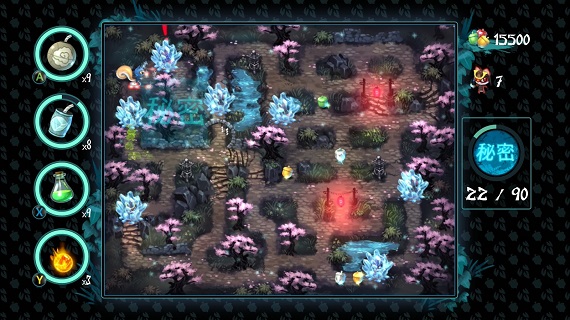 I know what you’re thinking; sounds impossible, right? Wrong. Nutjitsu isn’t a difficult game. There’re moments where you’ll knock into an enemy due to a slip of the thumb, or perhaps even die when distracted by the shuffling sounds of a crowning puppy scratching at your front door — what ever the reason, you’ll rarely die in Nutjitsu without some sort of schoolboy excuse. Until you increase the difficulty, that is.

While the entire game can be played without ever so much as gazing at the difficulty slider, there’s a world of controller-breaking rage hiding at the tippy-top of that death-meter. And once the difficulty is increased enough, running through levels at your own pace is no longer an option. Samurai foxes, while still of the same variety, are seemingly more intuitive, noticing more of your missteps, and increasing in numbers substantially quicker.

At the top of mount hard-ass, you’ll surly require those power-ups you probably started hoarding after 6 hours of collecting nuts. And boy, will you need them. Lots of them. It’s good, then, that Nutjitsu provides enough variety to keep your slick evasion techniques interesting well into the hours of play. These higher difficulties require more than faster reflexes; they demand precision in execution like no Pac-Man has dared. Of course, there’s a middle ground where challenge and fun meet and hold hands and stuff, but bravehearts have something to jump into as well. Thankfully, power-ups range enough in usability that they rarely become overplayed. Some offer invisibility, which allows for you to coast through enemies like a sciuridae Casper, while others are your more basic bombs and speed increases.

For now, Nutjitsu is an Xbox One exclusive — well, gaming console wise, as it’s available on the Microsoft Windows 8 shop, too. Other versions aren’t out of the question, though. I was told that Ninjabee doesn’t discriminate, and would like Nutjitsu to grace every console known to man. They didn’t actually say that, but the enthusiasm spoke for itself. If you own an Xbox One, Nutjitsu should be on your radar. It’s fun, addictive, beautiful, polished and features a ninja squirrel. As far as bite-sized gaming experiences go, it doesn’t get much better.