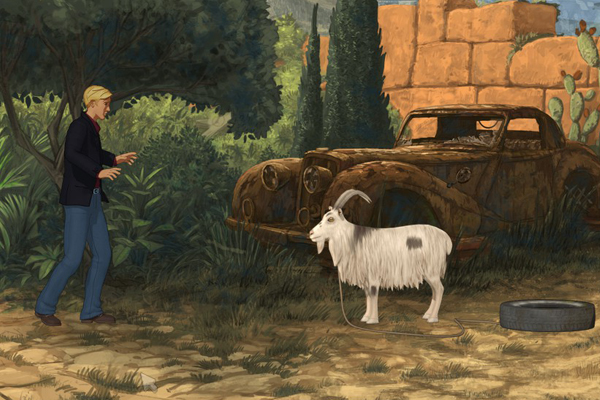 Moebius left me in desperate need of a palate-cleansing, and episode 2 of Broken Sword: The Serpent’s Curse could not have come at a better time. Okay, that’s not entirely true. I’d have preferred that it come out alongside episode 1 as a complete game, but it was a welcome relief regardless. Every bit of praise I had for the first half of the game holds true of its conclusion. The writing and acting are phenomenal, the backdrops can drop jaws, the music is delightful, and the puzzles are ingenious. It was an absolute treat to play through, and I did so in a single sitting despite starting rather late at night. I just couldn’t help myself.

Episode 1 left a lot of questions hanging in the air, but the most vital by far was whether or not the game would end on a satisfying note. If my last review left you waiting to know how the game would work as a complete package, rest assured that it does so splendidly. The second act neatly ties up the loose ends of the first, covers some fascinating philosophical ground in the process, and ultimately builds to an explosive climax. Point and clicks don’t get much better than this.

From here on lie spoilers for the first episode. You ought to finish at least that much before reading this, but you’ll probably have more fun just playing through the whole thing. Go ahead, I’ll be here when you get back.

We pick up right where the last episode left off (actually a little before because the game didn’t save my episode completion). Having escaped the fire set by Langham at the art studio with La Maledicció in hand, George and Nico make their way to La Castell de Sants in Spain. Upon reaching the estate’s courtyard, they find themselves facing gunfire and, worse still, a goat. It does a good job maintaining the tension of the last scene, but it’s a little overwhelming as a cold start five months later. This game wasn’t meant to be split in two, and here it really shows.

I don’t want to harp too much on the delivery model, because I see the necessity in it and I know it won’t be a problem for future players, but it colored my entire experience with the game. The first half is a great setup with no payoff, while the second half is a thrill-ride with no setup. You can forget a lot of details in five months, and with everyone throwing around people’s names like they’d just talked to them (because they had) I found myself more than a little confused. Some sort of recap for episodic players would have been greatly appreciated, but would also have damaged the pacing of the complete game. The game is designed really well to be one thing, but budgetary issues forced it to be the other.

Putting that one glaring problem aside, act 2 of The Serpent’s Curse works quite well. The mystery behind Inspector Langham’s sudden betrayal, La Maledicció’s hidden code, and the purpose of the Tabula Veritatis is unveiled at a good clip, while still giving the characters plenty of room to breathe and develop. Given it’s the latter half of the game, we’re only introduced to a few new faces, and out of them, only Marques’ daughter Eva is really a major player. The episode is more concerned with giving closure to characters who don’t have it already. Medovsky’s philosophically-inclined hitman Shears seemed more or less to be a throwaway gag in the last episode, but he’s the breakout star of this act. His conversation with Nico on determinism is hysterical.

This chapter is also packed with fan-service. George’s thing with the goat that one time has now become a thing with goats in general, not unlike Indiana Jones’ thing with stakes. It’s nice to see developers slyly acknowledge their past failings, but Revolution takes it a step further. Nico runs into the goat as well, and she gets on famously with it, openly wondering what George’s problem is. It’s a great way of playing up the differences between them, and opens up some very funny banter when the encounter yet another goat down the line. Nico also meets American Tourists Duane and Pearl Henderson for the first time, which is definitely a treat for series devotees.

As villains go, Langham is threatening, but a little predictable. Whenever you exhaust all the clues in a given area and make a big break, he crashes in “unexpectedly” to steal what you’ve found and kidnap someone. It works as a way to build up his presence, but it feels a touch repetitive, and the fact that he only has you held captive each time instead of outright trying to kill you is a little unbelievable. His boneheaded henchmen make some amusing quips, but are ultimately interchangeable save for their accents. Medovsky meets a quick and unceremonious end, to the point that it’s a little unsettling how quickly George and Nico can joke about it.

The actual adventure here is a more constrained than in the first half, but that makes sense given that the mystery is finally coming together. Rather than roaming about Paris at their leisure, George and Nico race from location to location hoping to beat Langham to the treasure. This sort of shift is par for the course with Broken Sword games, but the episode feels a bit light without any roaming aspects. Still, it’s not meant to be experienced in a vacuum, and the two halves balance each other well.

Puzzle difficulty ramps up nicely in the second act. The environmental and dialogue puzzles require you pay careful attention and use a bit of lateral thinking, and there are a pair of devious ciphers that are quite a lot of fun to decode. The setup for some of the puzzles can feel a little arbitrary – I don’t see why George has to devise a way to reach through live wiring instead of just unplugging a busted control panel, for instance – but the solutions are never too obtuse or arcane. There’s nothing as intense as the puzzles in Ether One, but your mental muscles will definitely get a workout.

The one exception is the final confrontation, which feels far too easy. Obviously the game’s climax needs to move at a tight clip, and fumbling with items would run counter to that, but it takes place in a really cool location that I felt was underutilized mechanically. From a story perspective, though, it works quite well, and serves as a fitting summation of the game’s gnostic themes. I’ve always admired Revolution’s ability to take on biblical subject matter without being trite or preachy.

All told, Broken Sword: The Serpent’s Curse is one of the best adventure games in recent memory, and the finest Broken Sword title since The Smoking Mirror. Unfortunately, it wasn’t all told at once, and the decision to split the game in two really hurts its pacing and overall sense of cohesion. Played as a single game, it’s incredible, but as I was made to experience it, it falls a little short of greatness. I wish I were reviewing the full game, because the complete package deserves a higher score. The two halves compliment each other perfectly, but on their own, they are wanting.