We’ve known for a while that the next Phoenix Wright installment was going to be a bit of a departure from the formula we’ve come to know and love over the past thirteen years. However, up until today, we weren’t entirely sure what Capcom meant when they unveiled that tidbit of information back in February. Thankfully, our wondering minds can rest a little easier now, as it was revealed today just what the next Phoenix Wright will bring to the table in the area of this different approach.

Entitled “The Great Ace Attorney”, this forthcoming entry in the venerable series is said to take place during the Meiji period, which went down from 1868 to 1912, and will draw upon this era for inspiration in a number of ways. While we’re not entirely sure what all will be unique and new in this title, outside of the aforesaid setting, we have been told that the main character, Ryunosuke Naruhodo, is an ancestor of — you guessed it — Phoenix Wright himself. Thus, you can expect old Neruhodo to probably pursue law and all things justice over the course of his adventure.

Other than that, we are also aware that the project is being led by director Shu Takumi, and producer Shintaro Kojima of Monster Hunter fame. As of now, The Great Ace Attorney is slated for release on the Nintendo 3DS. Be on the lookout for more info as it becomes available. In the meantime, scope the screenshot below for a quick peak at what to expect from The Great Ace Attorney. 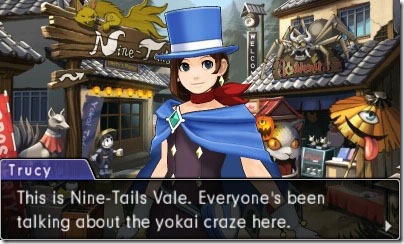